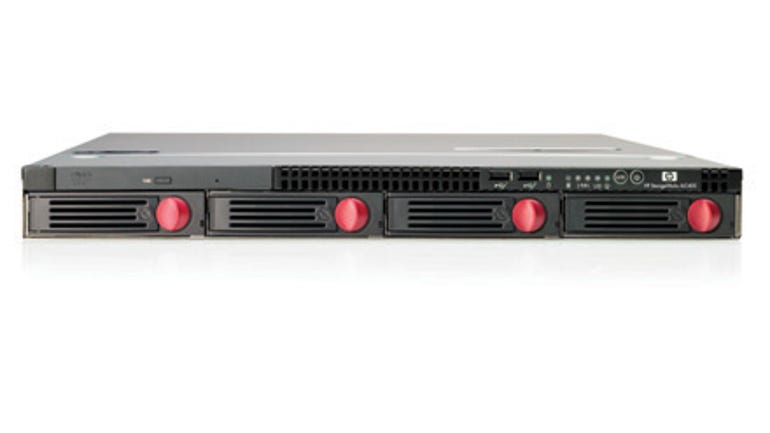 We tested Hewlett-Packard's StorageWorks AiO400 (All-in-one) and found its functionality similar to its bigger brother, the AiO600, with only the form factor and native internal storage capacity differing to any great degree.

What's Inside
Being a 1RU (rack unit) device, the StorageWorks AiO400 is the baby of Hewlett-Packard's AiO (All-in-One) family. Size does matter when you are trying to cram in mass storage, and with four 250GB SATA drives the baby of the family still manages an impressive 1TB of raw storage. It is surprising, however, that while the larger AiO units have a 500GB drive option this is not available in the StorageWorks 400. We can only surmise that the larger drives may generate more heat than the AiO400's small form factor can safely dissipate.

Airflow around the hot swap drive cradles appeared to be at least as good as the larger StorageWorks 600 and the drive cradles have a neat little locking mechanism that prevents tampering (unless familiar with its operation).

The processor in the StorageWorks AiO400 is only a 3GHz Pentium D but in its file serving duties this is more than adequate to cope with its tasks, and in any case CPU utilisation was relatively low even when the drives were working hard.

Redundancy is always a problem when you try to cram everything into a small form factor and while we have seen some 1RU implementations that included dual power supplies, they have usually lost something critical, like a mass storage bay, to accommodate the extra power supply.

HP has chosen to go with a single power supply and retain the four drive bays, but they have added some redundancy to the cooling with four dual cooling fans and a fifth single fan unit. All can be hot swapped with ease via their neat clip mounts should a fault occur.

The initial configuration is a relatively simple process and, provided you have a DHCP server, you can connect remotely via a browser to complete the setup. You can also direct-attach a monitor, keyboard and mouse to the unit to complete the initial setup.

Once you have logged in, you are presented with a simple storage hosting wizard for migrating SQL or exchange data, hosting an exchange group or SQL database, creating a shared folder or hosting a user-defined application.

We chose the creation of a shared folder, which was a pretty simple five step process that runs through the folders name and description, permissions, storage allocation for storage usage (including alarm thresholds), data protection (which controls tape backup and snapshots) and finally a simple review of all of the set parameters to check, before the folder is created. All pretty simple stuff and a quick look at some of the other wizards confirm that that are surprisingly simple as well.

The All-In-One Storage System Management application, despite looking quite complex with the left-hand pane's seemingly endlessly expanding tree structure, is actually very easy to drive with all functions very logically grouped. Anything you might like to tweak, migrate or host should be located in this application.

To test performance we ran some simple file transfer tests from the client PC over the isolated Gigabit LAN. The first test was the transfer of a single 624MB ZIP file to allow us to calculate the maximum throughput rate. The second test was with a folder containing 195 subfolders, 1972 files totalling 1,911MB to test how well the servers coped with more complex file transfers.

Our slowest transfer with the large complex folder was just over 9.5MB/s and the single ZIP file transferred in at a snappy 33.42MB/s.

Verdict
So what do you have for just under AU$10,000? A 1RU storage server that is a cut above most in terms of workmanship and design. Performance was also above average and, to be honest, the server management was probably one of the simplest we have seen.

But, at the end of the day you could probably buy a decent NAS box and, with some off-the-shelf software put together a pretty easy to use storage device for a cheaper price. Admittedly it would not be as well integrated as the AiO400, but you would have quite a bit of spare change after the purchase.