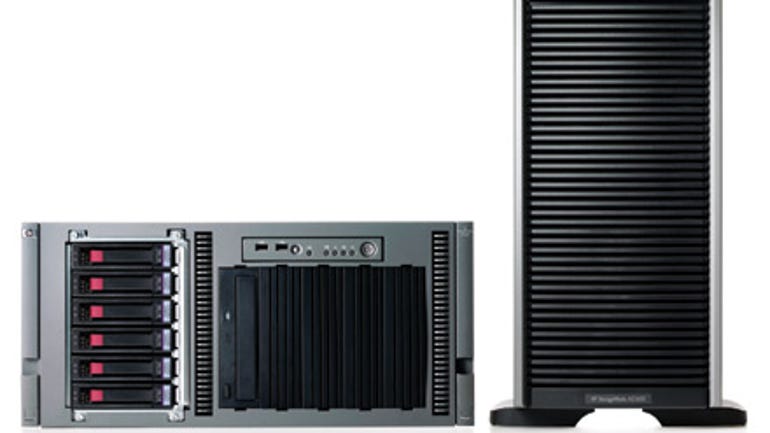 Hewlett-Packard's StorageWorks AiO600 (All-in-one) is a tower form-factor server running Microsoft's Windows 2003 Storage Server operating system, although it can be configured as a 5U rack mountable unit as well (with a separate part, the AiO600 Tower to Rack Conversion Kit which includes face plate, rails, and all rack-mount hardware).

What's inside
The test system we received was configured with six 250GB Seagate Barracuda SATA drives for a total 1.5TB of storage. There is also a 3TB version of the AiO600 configured with 500GB drives (currently the limit of internal storage available). External expansion options are available if more storage is required.

The components are all very simple to access for any upgrades or service replacements, most can be achieved without tools, and the workmanship and finish is excellent.

The system has a fast RAID controller that also includes 128MB of cache. In the event of power failure, this is protected by a backup battery to ensure no data is lost.

While on the topic of fault tolerance there is also a pair of hot swap 800W power supplies -- each capable of powering the server, should the other fail. Additionally, the hard drives are also in a RAID configuration and can hot swap.

The CPU has a very large heat sink and fan. While there are just two cooling fans at the back of the case they are large dual units and a cinch to remove and replace should one of the units fail. What's more, if one of them should fail you can unclip and replace it while retaining the working fan.

It is interesting to note that there is a second processor slot but it is hard to picture a scenario where the grunt of the dual-core Intel Xeon 2.67GHz processor would be inadequate for file serving duties.

Standard memory is 1GB (upgraded to 4GB). It is pleasing to see that there are six free memory slots so upgrading the memory will not require replacing the original modules. Network connectivity is via industry standard iSCSI or TCP/IP and file serving support is via CIFS or NFS, meaning almost anything can talk to it.

The hardware is well built, but what sets the AiO600 apart from any other server? HP would have us believe it is its ease-of-use that's the drawcard, claiming the All-In-One range has been designed for the IT Generalist rather than storage experts.

Admittedly, after configuring the unit we must admit it's pretty easy to setup. On top of basic installation there are simple to use wizards and data migration tools that take the hard slog out of migrating Exchange and SQL Server. While we did not try it, HP claim an Exchange Storage Group can be set-up and migrated with only 10 mouse clicks.

Performance
The AiO600 utilises Single Instance Storage (SIS) which HP claim can improve utilisation capacity by 30 percent or more by eliminating duplicate files. SIS is particularly useful with mail servers, for example sending an e-mail to a large list of recipients only results in a single e-mail file being created on the server that all the recipients transparently share.

Even though HP's claim of 30 percent or more space saving might be a bit optimistic there is no doubt that SIS does decrease your archive storage needs when you are carrying out backups, meaning faster archiving and less tape real estate.

To test performance we ran some simple file transfer tests from the client PC over the isolated Gigabit LAN. The first test was the transfer of a single 624MB .ZIP file to allow us to calculate the maximum throughput rate. The second test was with a folder containing 195 subfolders, 1972 files totalling 1,911MB to test how well the servers coped with more complex file transfers.

Verdict
All in all the StorageWorks 600 is a very nice piece of kit, but then you do pay for the HP name, design and workmanship. It will make your job a lot easier if you need to migrate Exchange or SQL Server as the wizards and ASM are very user friendly. If, however, you do not need all this then perhaps a NAS box with less bells and whistles may be the better bet.

HP products have a reputation for good design and the AiO600 does not disappoint in this regard. The components are all very simple to access for any upgrades or service replacements, most can be achieved without tools, and the workmanship and finish is excellent.