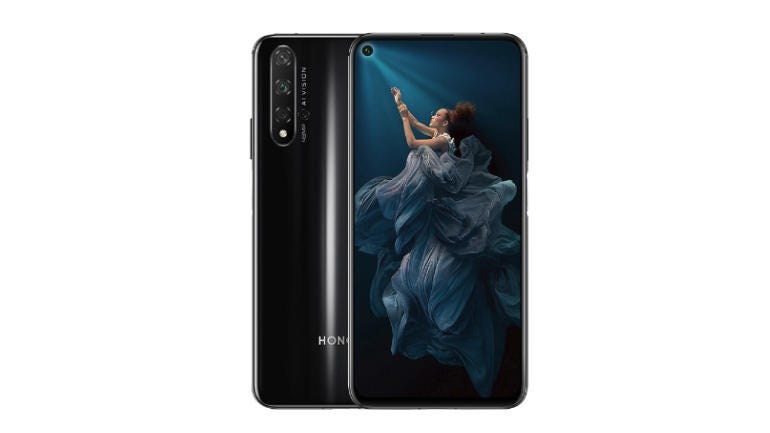 The Honor 20 series, launched in the spring, comprises three handsets: the flagship Honor 20 Pro is a fully featured £549.99 (inc. VAT) smartphone for buyers seeking a high-end bargain; the Honor 20 Lite is an affordable option at £249.99; and occupying the mid range is the £399.99 Honor 20, reviewed here.

Honor faces a challenge with this phone not only because the market at this price point is crowded with high-quality phones, but also because of its parent company -- Huawei. Despite recent positive noises from the US, doubts about long-term access to Android updates and the Google Play store continue to cloud the current perception of both companies' phones.

Still, the Honor 20 is currently available to buy in the UK (although not in the US), so let's evaluate it as a handset.

The Honor 20 has the same little cut-out camera in the top left of the screen as found on the Honor View 20. It's a clever design feature that makes for maximum screen usage, and I rather like it. The View 20 has a 3.5mm audio jack, but with the Honor 20 you'll need to use wireless or the USB-C connector to link up a set of headphones.

The glass back is reflective and somewhat slippery in the hand. It was also quite good at collecting fingerprints. I was sent a Midnight Black version which has a rather slate grey appearance. There is also a bold and vibrant Sapphire Blue option.

As on the flagship Honor 20 Pro, the Honor 20 has its fingerprint sensor embedded in the power button on the right edge of the handset. I'm not a fan of this location: as I noted in my review of the Sony Xperia X1, this is not as convenient as in-screen or rear-mounted sensors for left-handed users. Even as a right-hander I never really took to it.

As with the Honor 20 Pro there are four cameras at the back, although the details are not the same. The main camera has a 48MP sensor and an f/1.8 wide-angle lens. This is accompanied by a 16MP sensor with an f/2.2 ultra-wide-angle lens, a 2MP f/2.4 depth-sensing camera and a 2MP f/2.4 dedicated macro camera. This is an interesting selection, although more is not necessarily better. The macro lens, for example, is fixed focus: on-screen advice tells you that the optimal shooting distance is 4cm, and things get blurred if you disregard that advice. The front camera has a 32MP sensor and an f/2.0 lens.

During the test period I could only explore a limited range of shooting conditions, but with the exception of the macro lens I was satisfied with the results.

The Honor 20 is a dual SIM handset, and there's no option to swap one of the SIMs for a MicroSD card. Still, with 128GB of internal storage and 115GB of that free out of the box, there's plenty of storage here.

Like other current generation Honor handsets the Honor 20 runs on Android 9 Pie. It has an overlay called Magic UI, which looks very similar to Huawei's own EMUI overlay. In another example of Honor/Huawei convergence, opening the Top Apps folder on the handset (into which Honor had already installed Amazon Shopping), and asking the software to recommend more apps, reveals the Huawei AppAdvisor privacy notice.

The Honor 20 is a competent mid-range smartphone that stands up well to similarly priced competition. The Huawei connection is the only factor that might give prospective users pause for thought.

Join Discussion for: Honor 20, hands on: A high-quality mid-range...