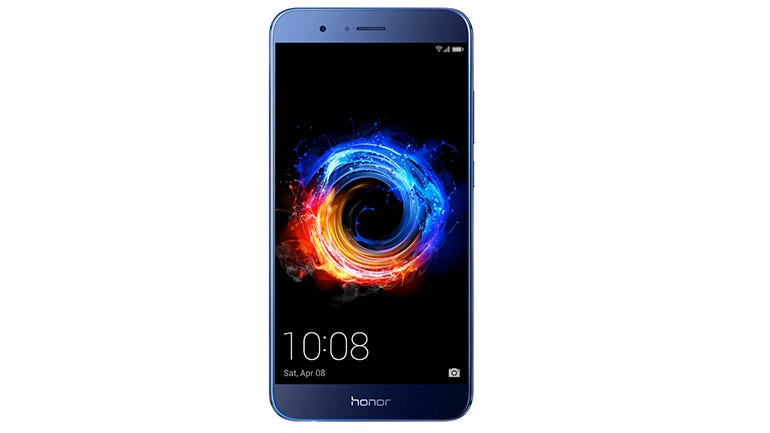 Last year the 5.2-inch Honor 8 gained plaudits as a smartphone offering great features for a relatively low price -- it currently sells for around £300 (inc. VAT). Now the Huawei sub-brand has got a new flagship, the 5.7-inch Honor 8 Pro, with beefed-up the specifications and a launch price of £474.99 in the UK.

It's a big phone, the body measuring 77.5mm wide by 157mm long, although it's only 6.97mm thick. If you're looking for comparisons, that's a shade thinner than the 7.3mm thick iPhone 7 Plus. The Honor 8 Pro is relatively heavy at 184g, but that's not surprising for a handset of this size.

Build quality is excellent. The metal chassis, which Honor was at pains to tell me is sandblasted and air-polished to deliver an ultra-smooth touch, is tough. Try as I might, I couldn't bow this phone in my hands. My navy blue review handset looked great -- gold and black variants will also be available.

There are a lot of premium features on offer here. The 5.7-inch screen has a resolution of 2,560 by 1,440 pixels, or 515 pixels per inch (ppi). Now, there does come a point when higher resolutions don't mean very much in general use -- there's only so much detail the human eye can discern. But it was made clear when I was shown the handset that this higher resolution can come into its own with VR. Honor is keen to push that side of things -- so much so, in fact, that some origami with the box creates a Google Cardboard-style viewer (see gallery, below).

Hands-on with the Honor 8 Pro: A premium... SEE FULL GALLERY

The HiSilicon Kirin 960 octacore chipset is supported by 6GB of RAM and there's 64GB of internal storage. More storage capacity can be added via a microSD card -- but only, as is often the case, if you're prepared to forego a second SIM, as trayspace is shared.

Android 7.0 Nougat is augmented with Huawei's EMUI 5.1 overlay, a skin that offers plenty of additional functionality over native Android but which tends to divide user opinion.

EMUI includes features designed to support system performance such as constant RAM defragging. Work has also been done to keep performance consistent over time rather than degrading due to file fragmentation, as can often happen with Android. Honor says it has tested its work on handsets loaded with 135 apps, 10,000 contacts, 500 call records, and 10,000 text messages.

It's nice to see an IR blaster on the feature list, as it's handy to control the TV from my handset. There's an efficient and reliable fingerprint sensor on the back of the device, sited conveniently for use with a forefinger.

Above the circular fingerprint sensor are dual lenses for the 12-megapixel main camera, while the front camera is an eight-megapixel unit. A dedicated monochrome sensor at the back should improve your moody black-and-white shots, although I've not had enough time with the Honor 8 Pro to experiment a great deal.

There are lots of shooting modes to explore, and Honor is pushing the photography features of this handset as a key selling point. Night shooting, in particular, is said to be improved, and Honor has partnered with GoPro to develop a feature called Highlights that tags and organises photos and automatically generates customisable video stories.

The Honor 8 Pro's 4,000mAh battery is rated to deliver two full days of 'regular use'. I've not had the handset for long enough to check this in real-world conditions, but will report back when I've clocked up enough testing time. The handset will charge via its USB-C port in under two hours.

My time with the Honor 8 Pro has been quite short, and I've yet to give it a full workout. What I can say is that it's well built and well specified, and also relatively affordable. As such, it's likely to give some of 2017's premium flagship handsets a good run for their money.