Honor View 10 review: An affordable flagship to stand alongside the OnePlus 5T

Honor has built a reputation for delivering good handsets at an attractive price. Launched at the same time as the mid-ranging Honor 7x, the new flagship Honor View 10 boasts features like a dual-lens camera an 18:9, 6-inch 1,080-by-2,160 screen and 128GB of storage. These are topped off with the latest must-have feature -- artificial intelligence, based around Huawei's latest Kirin 970 processor.

The View 10 is a clear competitor for the OnePlus 5T and also has enough punch to be a competent rival to the Huawei Mate 10 Pro -- at a considerably lower price than Honor's parent-brand flagship handset.

The Honor View 10 has a deep blue chassis which looks distinctive (the colour is an Honor favourite) and the matte finish to its backplate is reasonably grippy. The antenna bands are neatly disguised as black strips at the very top and bottom of the back. There's not much to distinguish this phone from any other handset with an 18:9, 6-inch screen these days, but there are a couple of points to note.

The first is the presence of a fingerprint sensor beneath the screen, in contrast to both the Huawei Mate 10 and the OnePlus 5T, which both put their sensors on the back of the handset. The rear-mounted option is much more ergonomic for one-handed use, and is my preferred location.

Even though the sensor is on the front of the chassis this isn't an overly tall handset. Measuring 157mm tall by 74.98mm wide by 6.97mm thick, and weighing 172g, there's not much between this and either the Huawei Mate 10 Pro or the OnePlus 5T (see table below).

The other notable design point is that the two camera lenses protrude significantly from the back of the chassis. To be fair, the Honor View 10 is just 6.97mm thick, and a raised camera lens area can also be found on the somewhat thicker OnePlus 5T, although the single raised lozenge on that handset deals with the situation rather more neatly.

The right side power button is slightly etched, presumably to help you locate it by touch alone, but I didn't find that this helped much. The fact that the handset's only other button, the volume rocker on the same edge, is much longer, is the real clue as to which button is for which function.

On the bottom edge you'll find the USB-C port for charging, and a 3.5mm headset jack. So there's no need to give up on a wired 3.5mm headset here, as Huawei wants you to do with its flagship Mate 10 Pro. The speaker grille is on this edge too.

There's no IP rating for dust and water resistance on the View 10, which might put a few potential buyers off. It's also worth noting that I was able to get a very slight amount of flex in the chassis by trying to bend the phone in my hands. However, this isn't a major concern.

The screen has the 18:9 aspect ratio that's become a popular choice. It measures 5.99 inches across the diagonal with a resolution of 1,080 by 2,160 pixels (403ppi). It's clear and sharp, and the IPS LCD panel delivers plenty of punch even if it doesn't look as vibrant as an OLED. Those looking for a bit more 'pop' from the screen can switch into Vivid mode, and it's also possible to adjust the colour temperature. Video looks great in wide-screen mode, and the speaker delivers good enough audio quality for a bit of headset-free catch up TV.

The Honor View 10 will accommodate two SIMs, but unlike on the OnePlus 5T the second SIM slot can also be used for a microSD card. That means it's possible to augment the internal storage. My review unit had 116GB free out of the box, and with 128GB microSD cards available for under £40, it's relatively affordable to more than double the internal storage capacity.

The Honor View 10 is powered by the same octa-core Kirin 970 processor that Huawei uses in the Mate 10 Pro, and it shares the neural processing unit (NPU) that deliver AI features designed to accelerate the handset's performance.

Among the features on offer is fast multilingual translation via the installed Microsoft Translator app, and an intelligent photography service that automatically recognises what you're trying to photograph and adjusts the settings automatically. It correctly identified my cat, a plant, and my lunch, for example, but is also easily fooled: it identified cats, plants, and food from web photos too -- well, it's not human.

The NPU's other main claim to fame is its ability to learn about how you use your handset, and so anticipate what you might need at certain times. It's a moot point whether prioritising particular processes, and deprioritising lesser used apps, is useful given the speed with which the processor can start up apps and processes anyway.

Android 8.0 is overlain by Huawei's EMUI 8.0, which adds a raft of features over and above the Android standard fare. There are plenty of granular settings to be found that could confuse or delight, depending on your fondness for fiddling around. They include the ability to use either an apps drawer or to show all apps on a home screen, plus the display tweaks mentioned earlier. For all its complexity, EMUI is much less obtrusive than it once was, and the better for it.

There are dual cameras at the back -- 20-megapixel monochrome and 16-megapixel colour -- that combine to deliver pretty good images. There's a bokeh mode, and the aforementioned ability to automatically identify what's being photographed and adjust settings accordingly. A sweep to the right brings up Pro Photo mode, where you can adjust detailed settings and access other shooting modes.

Monochrome photos are effective, and there's a good editing app that includes a range of potentially useful and fun effects and filters. The 13-megapixel front camera shoots a nice selfie and can use a subset of the available range of camera modes.

With all the configurability options, the advanced processor and the good cameras, it's somewhat surprising that there's no facial unlocking. The Honor website says this will be coming through an OTA update, but right now the fingerprint sensor is the only biometric authentication method available.

Honor adds a few applications to the standard Android fare, including several game demos, utilities like a compass, and a controller for the built-in IR blaster.

The 3,750mAh battery is surprisingly large for such a slim handset. According to Honor, it's good for 5.5 hours of gaming, 19 hours of video, 160 hours of music, 21 hours of 4G browsing, or 23 hours of 3G talk. Support for Honor Supercharge means the battery can get a 50 percent charge in half an hour. I'd expect this handset to get most users through a full day between charges and found power boosting to be impressively quick.

It seems odd for Huawei to push a budget brand that offers such great value for money and effectively rivals its own flagship Huawei Mate 10 Pro. But that's exactly what's happening here. The more expensive Huawei handset does offers advantages such as its Leica-branded camera system, more solid build, an IP rating, a slightly larger (4,000mAh) battery, and a rear-mounted fingerprint sensor.

But if you're looking for great features and performance on a budget, the Honor View 10 stands alongside the excellent OnePlus 5T. 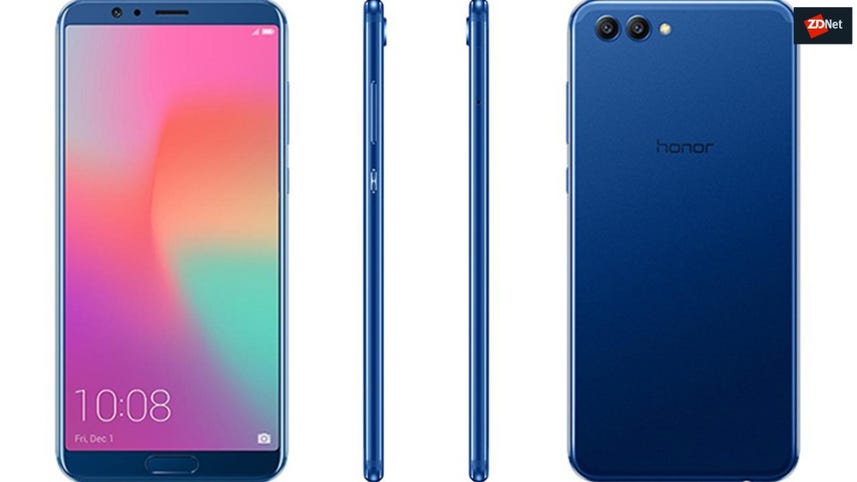 Flagship smartphones: Specs, benchmarks and prices for iPhone, Samsung, Huawei and more
Updated to include OnePlus 5T, BlackBerry Motion and HTC U11+ specs. Here's how the top end of the smartphone market looks at the moment.

Honor 7X review: Better than its predecessor and priced 20 percent less
At just $200, it's tough not to recommend the Honor 7X for first-time smartphone owners, younger customers, and those looking to get 90 percent of the functionality of a high end flagship for a fifth of the cost.

Huawei Mate 10 Pro review: A feature-packed flagship with extra AI
Huawei's flagship Mate 10 Pro is bursting with features. A great screen, very good battery life and widespread use of AI make it a pleasure to use, while IP67 protection is welcome.

OnePlus 5T review: Flagship smartphone quality at half the price
The OnePlus 5 was an outstanding handset back in June, and the new 5T model is even better, at the same price. We can only find minor criticisms of this superb-value smartphone.