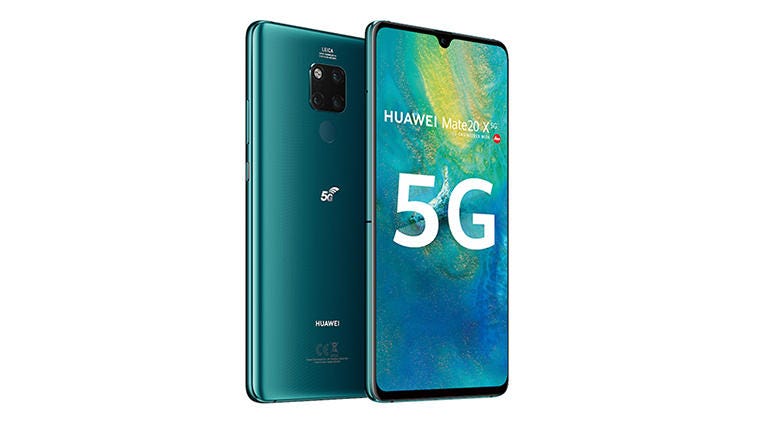 We reviewed Huawei's £799 7.2-inch Mate 20 X back in January, and gave it an 'Outstanding' rating for its Kirin 980-powered performance and long battery life, courtesy of a massive 5,000mAh battery.

Since then, a lot has happened in the smartphone market: Huawei has fallen foul of US suspicions over its alleged links to the Chinese government, and of the ongoing US-China trade dispute generally; and 5G networks are beginning to be switched on around the world -- initially in non-standalone (NSA) mode, leveraging existing 4G LTE infrastructure, with standalone (SA) 5G networks to follow.

In the UK, EE, Vodafone and Three have now launched their 5G networks, with O2 due to join the party in October. Coverage will be restricted, both geographically and in terms of use cases, for several years -- especially if the government succumbs to US pressure to limit or ban the use of Huawei's equipment in the UK's 5G infrastructure.

Still, if you're a determined early adopter, you'll be keen to get your hands on a 5G handset and search for a signal. So how does Huawei's first 5G smartphone, the £999 Mate 20 X 5G, shape up?

One difference is that the 5G model lacks the 3.5mm audio jack seen at the top of the 4G version. You get a set of USB-C earbuds in the box, but no USB-C-to-3.5mm adapter to cater for older headsets. Like the 4G version, the Mate 20X 5G has an IP53 rating for dust/water resistance -- that's 'dust protected' and capable of handling 'spraying water'.

Both versions of the Mate 20 X work with the optional M Pen, a 4,096-pressure-level stylus that costs £39.99 (Three is currently offering the first 1,000 buyers of the 5G model a free M Pen). Unlike with Samsung's Galaxy Note series, there's no on-device home for the M Pen, so you'll need to take care not to mislay it.

There are more internal than external differences between the 4G and 5G versions of the Mate 20 X, although both are based on the 7nm octa-core, dual-NPU (Neural Processing Unit) Kirin 980 chipset with 8GB of RAM and 256GB of internal storage (the 4G model is also available with 6GB and 128GB). Both handsets have dual SIM slots, one of which can also take Huawei's proprietary Nano Memory (NM) cards.

The key differentiating component, of course, is the 'multi-mode' Balong 5000 5G modem. The Balong 5000 is the first chipset to support both non-standalone and standalone 5G architectures, giving the Mate 20 X 5G a degree of future-proofing. It also supports 2G, 3G and 4G modes, reducing latency and power consumption when exchanging data between modes, Huawei says.

The 5G chipset and associated antennas take up more space than the equivalent 4G components, so something had to give unless Huawei wanted to substantially redesign the chassis. What gave was the battery, which was reduced in capacity from 5,000mAh to 4,200mAh in the 5G model. Fortunately, 4,200mAh is still a sizeable battery, even with a 7.2-inch screen and a 5G chipset to cater for (see performance results, below). Perhaps because of the reduced battery capacity, Huawei has boosted the fast-charging capability for the 5G model to 40W, from 22.5W in the 4G model. As before, there's no support for wireless charging.

Like the 4G version, the Mate 20 X 5G benefits from Huawei Supercool, a 'multi-dimensional' cooling system using Vapour Chamber and Graphene Film technology; this rapidly conducts heat away from sensitive components -- during heavy-duty gaming sessions, for example. We didn't notice any heating/cooling issues during the (short) test period.

Like the Mate 20 X, the 5G version runs Android 9 Pie with Huawei's EMUI 9.1 overlay. Both handsets are on Huawei's list of devices slated to receive the next Android Q release.

The Mate 20 X 5G delivered a similar, if slightly lower, level of CPU performance to its 4G sibling on the Geekbench 4 CPU benchmark, with and without Huawei's Performance Mode (PM) switched on:

To test GPU performance, we ran the 3DMark Sling Shot Extreme benchmark, which returned scores of 4108 on the OpenGL test and 4258 on the Vulkan test. Class-leading scores are 5744 (OpenGL) and 4993 (Vulkan). The combination of a big 7.2-inch screen and good graphics performance makes the Mate 20X 5G an appealing platform for mobile gaming.

The Mate 20 X 5G's 4,200mAh battery took 3 hours to deplete to 80 percent under the Geekbench battery benchmark for an estimated battery score of 7195, which is a good result. You can certainly expect all-day battery life with this handset, even when running a demanding mix of workloads -- but it's not the 1.5-2 days' usage that we saw with the 4G Mate 20 X and its 5,000mAh battery.

ZDNet's London office gets a decent 5G signal on EE's network, and we recorded download speed in excess of 300Mbps -- about three times the 4G download speed. Upload speeds were somewhat less impressive:

In her review of the 4G version, Sandra Vogel said: "The 7.2-inch Huawei Mate 20 X is a beast to carry around, and it's tricky to use one-handed. But its big screen makes it well suited to media-rich tasks like video viewing and games playing, as well as reading documents and ebooks". All this remains true of the 5G model, which delivers similar performance and doesn't appear to compromise too much on battery life.

It's still early days for 5G networks, but, geopolitical considerations aside, the Mate 20 X 5G looks like a good choice of handset at the moment, despite costing £200 more than its 4G sibling.

5G handsets and networks: Everything you need to know about roll-outs and roadmaps for the UK

5G network infrastructure market will be worth $4.2 billion next year

How China, Brexit, and the US derailed global 5G wireless

Huawei's "plan B" smartphone OS: What it needs to succeed (TechRepublic)