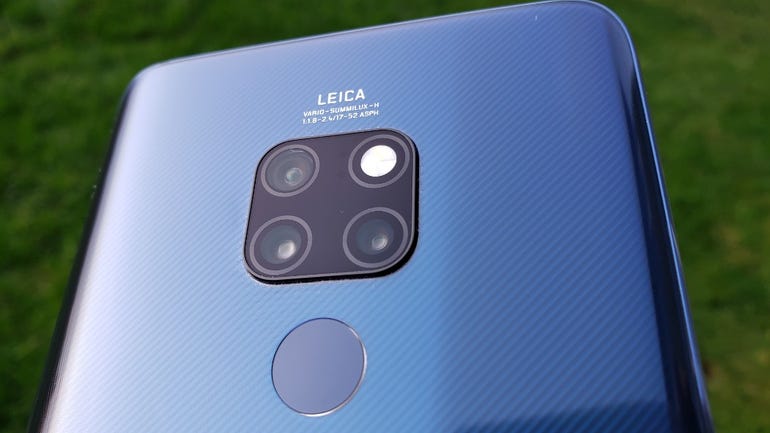 It's been quite a year for Huawei with it moving ahead of Apple in global smartphone sales while releasing some fantastic high end devices. The latest release from Huawei comes in the form of three Mate 20 devices, including the Mate 20 Pro and Mate 20 Lite that were both reviewed here on ZDNet by Sandra Vogel in October.

The Mate 20 looks to be a valid successor to the Mate 10 Pro with a more traditional form factor than the Mate 20 Pro that has curved edges and a fingerprint scanner in the display. Unfortunately, the Mate 20 series is not officially launching in the US so it is unlikely we will see many in the hands of US consumers.

The Mate 20 still has a 3.5mm headphone jack, but does not support wireless charging. An infrared sensor is still present on the top so you can control various devices with this remote functionality.

Every time I use a Huawei phone, I feel a bit sad since most Americans will never get the chance to test out its stunning hardware. The Mate 20 is extremely well constructed and I really enjoy the unique texted back that feels and sounds like a vinyl record when you rub a fingernail on it. I'm testing out the Midnight Blue model that is one of the darkest blues I have ever seen on a phone.

The front is dominated by a very large display with minimal bezels on all four sides. There is a notch out of the front, but it is similar to the small notch we saw on the Essential Phone with just an opening for the front facing camera. It is definitely not as jarring as the massive Pixel 3 XL notch and doesn't bother me at all.

Huawei continues to release many of its devices with 1080p displays. As I've stated on the MoTR podcast and written here on ZDNet, 1080p is perfectly acceptable to me for smartphones and going to higher 2K resolutions doesn't improve my viewing experience while it does have an impact on battery life. The LCD screen on the Huawei Mate 20 looks great. I also have the Mate 20 Pro in hand and that OLED display is beautiful too, but this LCD is perfectly fine for my daily use.

The power and volume buttons are on the upper right side with the power button having a splash of red around the sides of the button. The SIM/external storage card is on the upper left. I do not have any of the new nano storage cards Huawei supports so could not test out that functionality.

Microphone openings, an infrared sensor, and a 3.5mm headset jack are found on the top. The USB-C port is on the bottom, along with the bottom speaker. A dual speaker setup is present here with this bottom-firing speaker and the other coming out of the handset speaker.

The traditional Huawei rear fingerprint scanner is centered on the upper back and positioned perfectly for quickly unlocking your phone as you pick it up. Like the Mate 20 Pro, the three rear cameras are arranged with the flash light in a 2x2 arrangement on the center above the fingerprint scanner.

The cameras on the Mate 20 are slightly less capable than the three found on the Mate 20 Pro, but are still very capable of providing solid results. These cameras support night mode, portrait mode, and much more.

The Kirin 980 chipset and EMUI 9 help the Mate 20 perform flawlessly. I haven't seen any stuttering, slowdowns, or app crashes since I started using it. I am also seeing very solid RF reception on T-Mobile, based on watching the Android signal status meter in the settings.

EMUI has come a long way since it first appeared on Huawei phones and is now one of my preferred user interfaces, in large part for its support of the Google feed as a home screen panel which is something you usually only get with the Google launcher. Most of the EMUI customization on the Mate 20 is present in the settings area where you can fully customize the device to your preferences.

Others who have lamented EMUI are also now writing reviews that do not slam the user interface as it looks more and more like a stock Android experience. There are some Huawei specific elements still present, but these do nothing to slow down the device and I find they improve the experience over vanilla stock Android.

I continue to be pleased with the presence of the Huawei gallery application and image editing tools that help you develop some creative images to share with family and friends. HTC used to have its own custom gallery and editing tools, but switched to Google Photos. Google Photos is fine for backup and photo management, but a custom gallery with high-powered editing tools provides for a much better experience. The color splash option is my personal favorite on the Huawei Mate 20.

The Huawei Mate 20 also supports knuckle gestures so make sure to try them out in Smart assistance>Motion control>Knuckle gestures. Taking a screenshot with a double knuckle tap to the display is handy and drawing a line for split-screen mode is very efficient.

Enterprise users will also be interested in knowing the Mate 20 supports easy projection so you simply plug in the USB-C to HDMI and out to a monitor to use your phone as your computer.

When you launch the camera app (try double pressing the volume down with the display off to jump right into the camera app) you are taken into auto photo mode. Like Apple, and Samsung with the S9/S9 Plus, you can switch common modes by swiping left or right with the mode highlighted in orange text at the bottom of the viewfinder. By default, available modes are aperture (let's you adjust the aperture in software), night, portrait, photo, video, pro (manual), and more. When you select more, then an interface of shortcut icons (similar to the previous camera interface) appears and includes slow-mo, panorama, monochrome, light painting and many more. These include more modes that you can download too. You can change the order of these in the more menu, but you cannot bring these modes to the main navigation bar.

We saw Huawei enhance the auto mode through artifical intelligence and this provided some interesting results. While AI was helpful, you had to switch to pro mode to take photos without the AI applying its influence. On the Mate 20, the master AI can be enabled or disabled in the settings. In addition, if it is enabled, then an item is identified and the AI shows you what it will do in the viewfinder. If you do not like what the AI provides, simply tap the small X next to the AI prompt and normal auto mode will appear.

When I was using the P20 Pro, the AI was too aggressive with landscape and some other scenes. When I took a shot with grass in it, the camera made everything way too vibrant and green, giving it a fake appearance. Huawei has toned down the AI a bit so I'm not seeing such garish results when using Master AI on the Mate 20.

AI is even built into the pro (manual) mode where the software will offer intelligent layout suggestions to help you improve your photography skills.

Unfortunately, people in the US will have to find a reputable importer in order to purchase a Huawei Mate 20 due to US government concerns over the company and Best Buy's move to stop selling Huawei phones in its stores. The Mate 20 is priced at €899 with the Mate 20 Pro at €1049. The Mate 20 Pro offers several improvements over the Mate 20, primarily related to the cameras and in-display fingerprint sensor. The Mate 20 does have a standard 3.5mm headset jack though and is a solid device too.

The Mate 20 is a pretty wide phone and offers a very large display for those who want a big phone. It's not very comfortable in my pants pocket though and is a bit bulky to hold in my hand.

In typical Huawei fashion, the battery seems to last forever and it also charges fast with Huawei's charger. The screen looks great, performance is flawless, reception is good (even in the US where not all bands are supported), and that rear fingerprint scanner is faster than anything I've tried at unlocking your phone.

Huawei P20 Pro: The most exciting phone of 2018 is great for business tooDelivering long battery life, awesome cameras, and useful settings, the P20 Pro is Huawei's best phone ever. After spending a month with this exciting device, here's my report.

Huawei Mate 20 Lite review: A decent large-screen mid-range handset with too much bloatwareThe Mate 20 Lite is an affordable 6.3-inch smartphone with good battery life and a solid chassis.https://www.zdnet.com/product/huawei-mate-20-lite/

The 10 best smartphones of 2018Huawei, Samsung, and Apple have proven to be the best of 2018, but OnePlus also joins the group in the top five as we approach the end of the year.

Huawei Mate 20 Pro is outrageously innovative (CNET)If the Samsung Galaxy S9 and iPhone X had a phone baby, this is it.