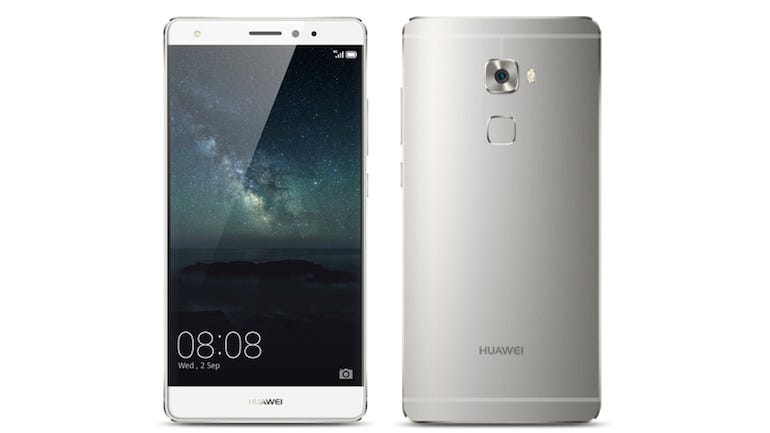 Huawei says its new Mate S smartphone combines an ergonomic, 'luxurious' design with innovative technology to deliver a top-notch Android experience. The company often excels on build, and is Google's production partner on the well-received Nexus 6P. So how does Huawei's own flagship handset -- which can be had SIM-free for £399 (inc. VAT) in the UK -- stand up against those from market leaders Apple and Samsung?

The two plastic strips top and bottom of the backplate allow the antennas to function and are nicely integrated into the design. More incongruous are the depressed square of the fingerpint sensor and the raised square of the camera lens (which is protected from scratches by sapphire glass).

There's only a minimal set of buttons and connectors. You can't remove the backplate, so your SIM sits in a pop-out caddy on the left side of the chassis. This caddy will accommodate two Nano-SIMs, but if you do use two SIMs you'll forego the opportunity to use a MicroSD card to bolster the handset's 32GB of internal storage.

This is not a unique situation -- we noted it in our review of the OnePlus X, for example -- but we don't much like it. If you use a MicroSD card for important files, you're unikely to want to pop it out to accommodate a second SIM, making the latter feature pretty much redundant.

The right edge houses the volume rocker and power button, both of which are well made, easy to find by touch alone, and sit solidly in the chassis.

The headset connector is on the top of the handset, while the Micro-USB port is on the bottom alongside the speaker grilles. Sound quality, incidentally, is excellent: the top volume isn't especially high, but when you reach it there's no distortion, enough bass (for our taste), and treble is not overpowering.

The 5.5-in AMOLED screen has a resolution of 1,080 by 1,920 pixels, or 401 pixels per inch (ppi). That's not the highest resolution you'll find in a flagship smartphone, but it's good enough for us and we didn't hanker for more pixels. The image is sharp and bright, and if you find the AMOLED colours a bit too vivid for your taste you can change the colour temperature using a Huawei-added feature in the general display settings. The screen is extremely responsive under the fingers and is protected by Corning's 2.5D Gorilla Glass 4.

Touch is a key feature of the Huawei Mate S, and there are several aspects to this.

The fingerprint sensor at the back uses Huawei's Fingerprint 2.0 technology, which is an update of that used on the Huawei Mate 7. You can use the fingerprint sensor not only for login, but also for other general management features -- and you don't have to have fingerprint login set up for these alternative functions. You can tap-and-hold the fingerprint sensor to take a call or shoot a photo or video; tap the sensor to turn an alarm off; slide a finger down the scanner to display the notification panel, and then double-tap to clear its contents; and you can even swipe left and right to browse photos.

This might sound like a case of 'features for features sake', but we found that these fingerprint sensor functions really helped with one-handed use. Recognition speeds are faster with this new version of Huawei's fingerprint software too -- and that goes for both the sweeping gesture and login recognition, both of which are 'blink-of-an-eye' fast.

We're not so sure about the knuckle-based touch features in Huawei's Knuckle Sense 2.0 technology. You can tap the screen with a knuckle to take a screenshot, draw an area to screenshot as a crop, or tap twice to start or stop a video recording. You can also draw a letter on-screen to start an app -- and you can define lots of different letters for different apps. Two sharp raps with the knuckle can turn the device on.

It all works, but it's a step too far for us -- not least because it seems that you can't do a knuckle gesture with a fingertip, so you must remember that you've set up a knuckle gesture. It's simply a hassle.

If you're lucky enough to get hold of the 128GB version of the Huawei Mate S at some point after its future launch, you'll also be able to take advantage of Huawei's Force Touch system.

Essentially, like 3D Touch that's implemented on the iPhone 6s, this is a feature that uses the pressure you put on the screen to elicit effects. Pressing on the screen to zoom into photos is quite a neat idea. Pinch-to-zoom still works too, but it's a two-handed thing, and the force touch option can be done one-handed. You can also touch parts of the screen edge to replicate the jobs of bottom-row navigation keys, allowing you to free up that section for applications and for quick-launching apps.

The other use for Force Touch is really 'outside the box': you can put an object on the screen to weigh it. We're not convinced by any of these uses, to be honest -- they feel like a solution looking for a problem.

Android 5.1 (an update to Android 6 is planned) is topped by Huawei's EMUI 3.1 skin, which makes numerous top-level changes to Android.

Huawei continues its rejection of Android's app tray, and has also skinned features like the calendar and contacts. There are plenty of tweaks further inside to discover, such as the ability to open two apps at the same time.

Internally the Huawei Mate S is powered by the company's HiSilicon Kirin 935 octa-core SoC, supported by 3GB of RAM. We noticed no performance issues at all with this configuration.

Of the 32GB of internal storage in the standard Mate S model, our review sample had 23GB free for apps and data. You can, as already noted, add a MicroSD card if you wish -- albeit at the expense of a second SIM.

The Mate S's 13-megapixel main camera is perfectly serviceable, and there's a neat option to quickly switch between different shooting modes along the bottom of the screen. This makes it easy to alter the light balance, as well as switch into 'beauty' mode, video, time-lapse and a set of light-painting options that slow the exposure to varying degrees. These complement the manual controls nicely. All but the light painting options are also available when you switch to the front 8-megapixel camera.

Wi-Fi (2.4GHz 802.11b/g/n only) is present, along with Bluetooth 4.0, NFC and GPS. The 2,700mAh battery might not get power users through a working day, so it's good to know that fast-charging is supported to give the battery a quick boost if required.

Huawei has done a good job with the Mate S in terms of its physical design, and the extra functions added to the fingerprint sensor are also welcome. We like a lot of what's been done with the EMUI skin too, although it might not suit all tastes. However, the knuckle gestures seem unnecessary, and Force Touch isn't present in the version that's currently available to buy.