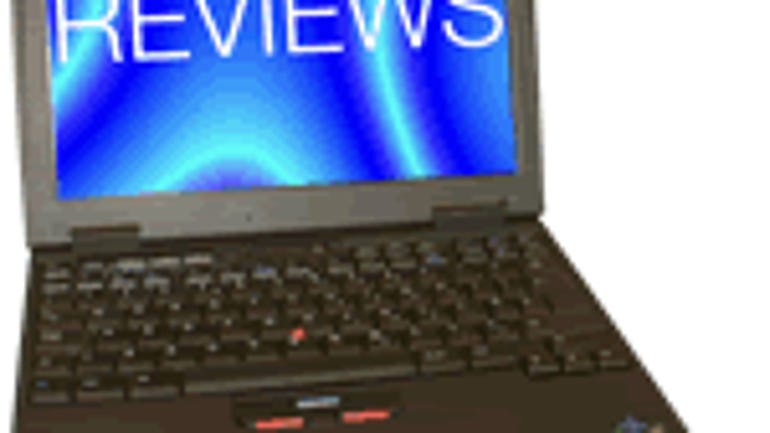 If you're after portability, and you're prepared to sacrifice performance and features to get it, the ThinkPad X22 from IBM will appeal to you. It's the lightest machine in this roundup -- both the notebook itself at 1.58kg, and the travel weight with all the accessories at 2.5kg. The battery life is very good due to the use of Intel's 0.13 micron 800MHz Mobile Pentium III-M processor -- only the Dell Latitude C400 lasts longer. However, that same 800MHz processor means you don't get as much performance out of this notebook as you could from other systems.

The ThinkPad X22's sleek black casing has a rubberised coating that resists scratches and gives you a better grip. Connectors are few and far between compared with other notebooks -- there's no serial or parallel ports and no IEEE 1394 port, for example. However, you do get two USB ports, VGA out, a single Type II PC Card slot, modem and Ethernet ports, along with headphone and mic sockets.

The ThinkPad X22 also has IBM's UltraPort built into the top of the display, allowing certain optional extras to be connected to the notebook, such as a Bluetooth module or a microphone for speech recognition. The display also features a keyboard light called the ThinkLight that, although not very bright, is enough to allow you to see the keyboard in unlit room -- during a presentation, for example.

The CD-ROM and floppy drives are external USB units. They're both very compact and powered via the USB cable. The CD-ROM drive is only a little larger than a CD jewel case, and features a headphone socket, play and stop buttons and a volume control -- you can use this to listen to CD audio without going through the notebook if necessary. The floppy drive accounts for 250g of the unit's travel weight, so if you've no need for this on the road, then you can lessen your burden even further.

We were supplied with a unit fitted with 802.11b wireless networking built in. The adapter is entirely internal to the notebook, so there's no need for cables, adapters or screwdrivers. Two antennas are built into the display section of the notebook, and IBM claims that this delivers better performance than PC Card wireless adapters.

The comparatively slow 800MHz processor used in the ThinkPad X22 means that it delivers moderate benchmark scores -- it gets just 26.2 in Business Winstone 2001, for example, compared to the Dell Latitude C400's 31.5. The TravelStar 30GN hard drive doesn't appear to be very quick either, exacerbating the situation: the ThinkPad X22's Business Disk WinMark 99 score of 2,880 is the lowest in the group.

Although we weren't supplied with a docking station, IBM does sell this and other accessories for the ThinkPad range of notebooks. However, adding a docking station would considerably reduce the X22's portability, which is its major selling point after all.

The ThinkPad X22 can't be considered great value for money -- you don't get huge amounts of performance or features for your £1,727 (ex. VAT). However, it'll last longer away from the mains and hurt you less to carry it than many competing systems. The Dell Latitude C400 offers better battery life, doesn't weigh much more and costs less, although you'll have to pay extra to add wireless networking. If you want a wireless-equipped ultraportable that will last a long time away from the mains, the ThinkPad X22 fits the bill. However, if your budget's tight or you need more performance, you might want to look elsewhere.