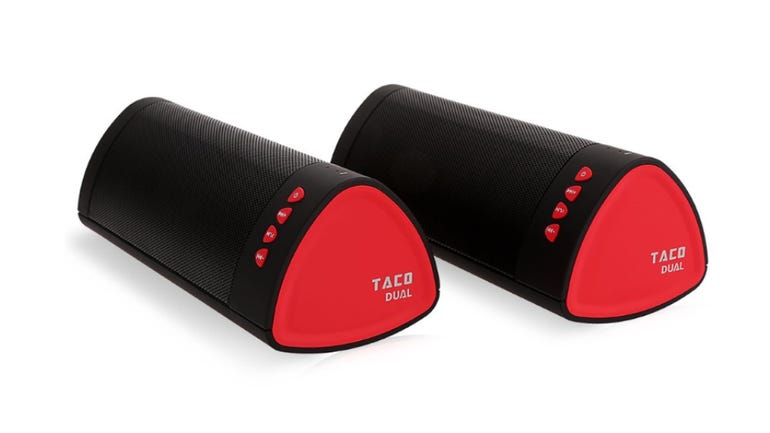 If you want stereo sound when you are out and about, then dual Bluetooth speakers connected to your device will give you the surround sound experience like you get at home.

The Taco Dual Bluetooth 4.1 NFC stereo speakers are the first set of dual speakers I have tried. Would the pair of 6W speakers give me the stereo sound that I get indoors on my main system?

The speakers each come with a carrying pouch, audio jacks and charging cables. They are solid looking and each weigh 11.3 ounces. They have black speaker grilles and hard red plastic ends. The speaker control buttons are soft red rubber. There are two cones in each 3W speaker.

Each speaker has a voice, confirming that "power on" or "power off".

If you press the power buttons at the same time, the voice says either "left or right". when connected by Bluetooth the voice confirmation says that it is "connected right (or left) channel".

Pairing is a little fiddly with both speakers.

I also thought that both speakers would play exactly the same sounds on each channel. On testing them, each channel played as in a normal stereo system. They can both be used independently giving two speakers for the price of one.

The sound is good with the speakers placed in optimum stereo positions. I placed them at both sides of my good-sized office and the sound filled the room. I did not notice any distortion until I turned the speakers right up to the max and played a track with lots of bass.

The speakers do not sound tinny on the treble notes either. There is a good range of sound across all frequencies. Black rubber feet stop the speaker vibrating when lying on its side.

The speakers also operate as a hands free speaker for your phone - although I found the speaker's voice announced the incoming number of the caller which was disconcerting. Only one speaker is connected for voice calls at one time.

If you are playing music when an incoming call comes in, the speakers will go into mono for the duration of the call, switching back to stereo when the call ends.

Pausing and replaying tracks is instantaneous -- the fastest response of any of the speakers or headsets I have tried which I found really impressive.

Overall, these are a great set of speakers used together or independently and well worth their sub $70 price.