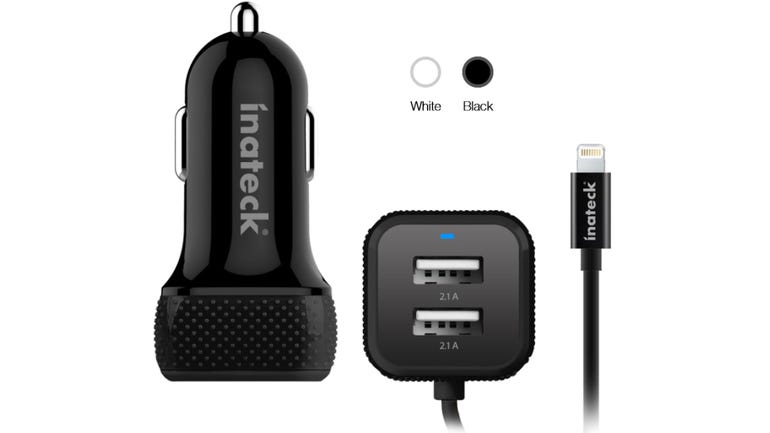 Often when you are on the road, you need to charge more than one device. Swapping and changing devices over to charge can become a pain.

The Inateck two port rapid car charger charges from the cigarette lighter in the car. It has one 3-foot long cable permanently attached to the charger with a lightening adapter for Apple devices.

There are also two USB ports in the charger which means you can charge three devices simultaneously. The charger comes with one USB / Micro USB connector.

The charger is small, at two and a half inches in length and unobtrusive in all four cars I tested it in. The housing that sticks out of the cigarette lighter has raised rubberised easy grip dots around the housing so it is easy to remove from the car when required.

Each port delivers 2.1A output and there is a blue LED light to indicate that the charger is plugged in and ready to charge.

I liked the fact that both cables have Velcro cable tidies supplied so I could coil the lightening cable up and keep it out of the way when I was using the other two ports. I also liked the rubberised grip around the housing to remove the charger - other chargers I have reviewed do not have this grip.

I like this charger for its compact style, and ease of removal. If you do not have any devices that need the lightening charger then you may become irritated by the extraneous cable that you can not remove.

All in all, a nice useful little charger which will charge more than one device at the same time.