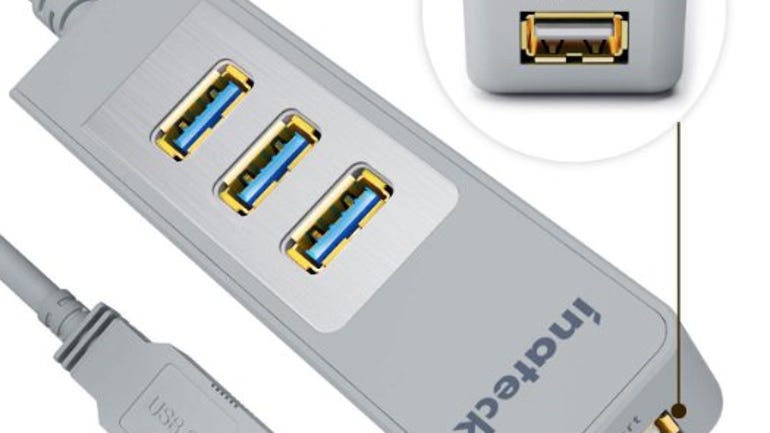 The Inateck HB4009 looks like an impressive multi-function device that can be used as a hub extender. If your PC only has one USB socket, plug the hub in and you have three USB ports at your disposal -- a very useful feature for older PCs with only one USB port.

You do not need to buy an external keyboard and mouse. You can use your native mouse remotely on another machine.You can also transfer data directly from one PC to another, regardless of whether the OS is Mac, Android or Windows.

I tested the hub on a range of devices:

I tested the hub on a legacy Windows PC transfer all data to a newer machine.

Installing the hub software was simple. I plugged the USB 3.0 cable in and ran the SKLoader executable.

The software automatically installed and a notification appeared in the system tray.

I then plugged the other end of the cable into the other PC which invoked the same process to install the software there.

When it had completed, the Mac KM link window appeared. Clicking this icon brought up the Go!Bridge software.

I could now see my Netbook documents on my main PC.

There is a "Dock" window at the side of the Go!Bridge interface.

To transfer, select the files and drag them into the dock window.

The files can then be copied to the other PC. The process took seconds - even from an old slow Netbook.

I transferred several music albums from my main PC, dragging the albums I wanted to move over to the dock window and into my music folder on the Netbook.

This process was also incredibly fast -- much faster than moving files across by using a USB stick.

You can also select files, hold and drag them to the desktop from the UI by holding the mouse button, or select the files and use Ctrl+C, Ctrl+V.

All options are very fast. I liked the dock window option. I could place files in the dock and copy them to different folders on the destination PC.

An added bonus is that once the two PCs are connected, I could use my mouse and keyboard from one PC on the other PC. The second PC acts as a second, or third screen and is really useful for dragging and dropping files between two PCs.

Connecting to the Mac OS X machine was simple. I plugged the cable into the USB port and opened the CD MacKMLink in the desktop. I double clicked the program to enable the Go!Bridge UI.

I transferred files back and forwards dragging files from Go!Bridge directly to my Windows desktop. I had exactly the same function and features as when I used the Windows to Windows transfer between PCs. The remote mouse and keyboard function worked well to access files on the Mac.

I was impressed with how seamless the process was across two different operating systems.

Using the hub between Windows and Android is a multi-step process. The Android device needs to be OTG enabled. OTG is USB On-The-Go which allows USB devices to switch back and forwards between host and client devices.

I downloaded a USB OTG checker to find out whether my legacy Android did support OTG. next I had to download the Android app "Windows Linker". The user manual has a QR code to download the app directly, but this Android tablet did not have a reader.

I downloaded the app directly from Google play and connected the hub to my tablet. Windroid Linker showed both devices as being disconnected - even after a reboot.

I then discovered that Android devices newer than Android 4.4 do not support data sharing. I was using a tablet with the OS version of 5.0.2.

I sourced an older tablet running Android 4.4. I downloaded Windroid Linker and connected the hub. I could then connect to my Android data from Windows although I could not transfer files. I could easily use the remote keyboard and mouse on the device.

I tried to connect to Chrome OS. Although the Chromebook could see the hardware and install files, there were no drivers available to install the software. There is no mention of Chrome OS in the user guide.

The hub would not connect to my colleague's legacy iPad. Windows to Windows connections and Windows to Mac however, were seamless.

It connected well to Windows and Mac OSX hardware. It would not run on Chrome OS at all - but to be fair, the user guide for the hub does not claim to.

Android devices needed Windroid Linker which I found to be inconvenient. I had to connect to the Internet, download an app and try to connect again. The Android software has to be version 4.4 or below for file transfer to work. I found this limitation clunky.

Remote mouse and keyboard across the other operating systems - when the feature worked - was a very useful feature that I used often. Transferring files was also quick and seamless.

I was impressed with the speed of file transfer and ease of connection from Windows to Windows and Windows to Mac for the Inateck hub. I would use this for file migration when I build my new PC and need to move my existing documents across.

If you have legacy devices and no cloud infrastructure to transfer files across then you might find this hub useful.

The extra steps involved to get this device up and running on each platform was a step too far for me. But using the HB4009 as a hub extender was by far the most useful thing about it on a legacy PC with only one USB port.

The HB4009 is a really easy way to move your files around -- without the cloud. But would I use this if I had to transfer files from one device to another? Probably not. I would tend to use a cloud storage system - if I was online -- or a USB stick if not.