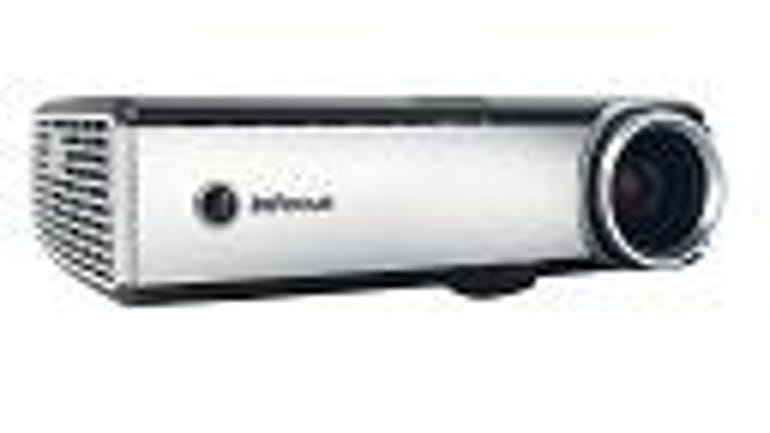 All use a DLP chip to achieve full-colour projections at a native resolution of 1,024 by 768 pixels, although they will accept standard PAL and NTSC signals as well as HD resolutions up to 1080i.

With a contrast ratio of 1000:1, image quality is pleasantly high for a business projector, where ratios of 400:1 are still commonplace. This will give your multimedia presentations extra impact and clarity.

From the almost Mac-like start-up chime to the seductive body design, you can tell that a lot of effort has gone into this product’s look and feel.

The casing is made of a sturdy yet lightweight plastic, finished in matte black and silver with gentle curves that lend it a subtle yet appreciable level of style. Both sides of the case are left almost open to the air, protected only by thin, widely-spaced grilles that allow a full view of the internal workings of the device.

On one side is a pair of fans which keep the unit cool, but cause around 35dbA of noise when in operation.

In common with many lower-cost projectors, the height adjustment is via a single front-mounted foot which is engaged via a release button at the front of the unit. This allows for a quick setup, while one of the two rear feet is fitted with a screw thread to allow some left to right tilt adjustments.

The top of the unit houses twelve large control buttons and an illuminated LED status display. Because you have auto-setup, keystone, source and preset selector controls at your fingertips, you’ll be able to get the projector set up quickly without having to use the remote control to navigate the menu system.

The supplied remote control is very simple, with only five buttons, including power. It’s not illuminated and has no built-in pointing device, but is very easy to operate by feel alone.

The menu system itself is perhaps the least usable part of the system, so it’s just as well you won’t need to use it often. It has a reasonably logical layout, but it uses small text and isn’t as user-friendly as many we’ve seen.

Several display presets are offered, although the differences between them will be hard for many to distinguish. The one exception is 'Presentation' mode, which gives a significant boost in brightness, contrast and readability but at the expense of quite a lot of colour fidelity. In this mode we measured around three times the usual brightness and well over double the contrast ratio when compared to the default settings, but you really wouldn’t want to use this setting when viewing photographs or video as colour can become dirty, and paler colours can disappear altogether.

The IN36 offers a wide selection of connection ports, including VGA, VGA pass-though, composite video and component video as well as mono audio and serial RS-232.

As is the case on many projectors from InFocus, digital video input is via the seldom-used DVI-M1 connector. This port supports both digital and analogue sources plus control data, but a special cable or adapter is required for connection to a PC. A DVI-M1 to VGA/USB cable is provided, but if you want to use a digital connection you’ll need to pay extra for the cable.

Since this is primarily a presentation device, colour performance in general isn’t as good as you’d get from multimedia projectors. However, brightness, contrast and readability are all excellent. Also, at this price, you don’t get any fancy extras like auto-focus, auto-keystone or motorised zoom and elevation controls. However, it's one of the one of the best-looking and most compact projectors in its class with more than enough brightness to present in larger rooms without the need to dim the lights.