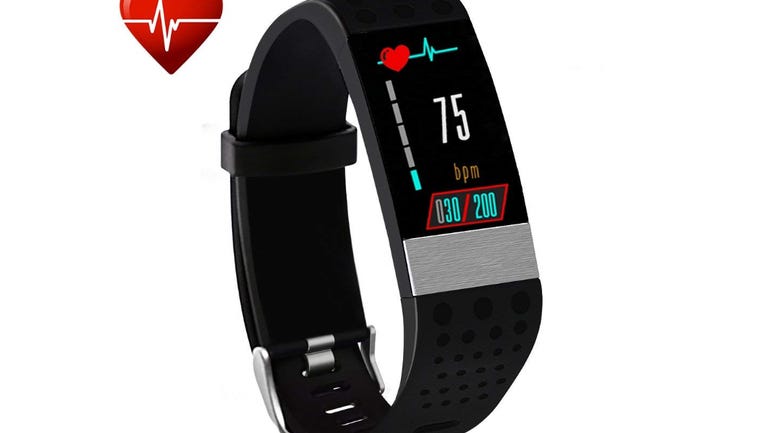 The Kasmer fitness tracker is a looker: Not too clunky, a slightly curved screen, and a well-built bracelet strap. It looks like any generic fitness tracker on the market. It has a full-colour screen and looks nice on my wrist. But it does not have the functionality I want.

It seems to have an identity problem -- perhaps because it is white labelled and sold through several different vendors. On Amazon, and on the back of the box, the product is called Kasmer, but the App Store app is called IXFit, and the Bluetooth pairing shows I7Plus. For simplicity, I am going to refer to this as the Kasmer.

Unlike the Mgcool band 3 or Star 9 fitness band, it has a colour screen and a metal touch-activated band. The tracker is not too big for small wrists, and the strap is comfortable. The screen, whilst not as bright as other trackers, is readable on dull days and when inside.

There are several screens that show the home screen with time, date, battery, Bluetooth status, and a step counter (long pressing will record workout time, heartbeat, distance, and calories). One screen shows distance travelled and incline, another screen shows heart beat, either instantaneous, or measured over time, and yet another screen to show blood pressure. Plus, a screen that looks like an animated Microsoft Windows logo gets you into the configuration screen.

The Kasmer tracker is IP67 rated, so there is not an issue if you get sweaty or take a shower wearing the tracker.

The device charges by removing one of the straps to expose the male USB connection. You insert the USB connector into a DC charger to charge the device, which is supposed to take three hours. This connection is really loose and wobbles in the USB port.

If you do not know which side of your USB female port has the metal contact, it is easy to plug the tracker in upside down. Even when the tracker is inserted correctly, it took over five hours to charge. The app also does not show an accurate level of charge, jumping from 5 percent to 20 percent in increments up to 100 percent. It is difficult to see when the tracker is fully charged.

The app looks good, with screens showing steps taken, heart rate, sleep, and a configuration screen to set your profile, add a call, and social media push messages. It also has a smart alarm clock that will beep to wake you up, and there is a remote camera function. It is well written, and the English language is good. So far, all seems really useful for me.

The device is easy to pair with Bluetooth, and when connected to the app, sets the time and date to match your mobile device. You can configure your height and weight and your validated blood pressure to create a baseline.

I have several issues with this tracker. If I record my heart rate from the tracker, it does not sync to the app. Only heart rate monitoring initiated from the app is stored as a historical record.

Blood pressure is not synchronised from either the app to the tracker or from the tracker to the app. I felt that the app heart rate record was lacking in functionality, and the step tracker was unrealistic. It recorded my steps as 16,995 with distance 7.31 miles when all I had done was some gardening and a 1.5 mile dog walk that day.

My other step tracker usually calculates a step count of 6,500 steps for a similar day. The heart-rate history was useless, as I measured heart rate from the tracker -- not the app.

The sleep function seemed to be fairly accurate, showing that my deep sleep times are dreadful. I'm a light sleeper, easily disturbed. It also showed accurately my waking times.

Read also: Why Fitbit could make a good Google acquisition

Although I configured message push notification across all social platforms, I had no notifications -- even though these were all enabled on my Android phone.

I had high hopes for the Kasmer. It is a nice-looking fitness device, and with some more investment in the app and sync functionality, I think it has potential.

If you use the code: 288VY57F you can get a 35-percent discount through Amazon, but I think I will wait until the app improves its features and gives me a historical record of heart rate, blood pressure, and an accurate record of my steps.

The Star 9 fitness band has all the basic functions to record your health activities, but it is not engaging -- nor very accurate.

Outside of the Apple Watch for iOS users, the Fitbit Versa is the smartwatch to beat right now. It's comfortable, stylish, and has excellent battery life.

Fitbit Ionic: Excellent activity tracker, but it's not a very smart watch

Fitbit's latest GPS sport watch may be the most capable Fitbit ever, but a month of testing reveals some areas for improvement. Matt Miller offers tips for new and prospective Ionic owners.

The Gear Fit 2 Pro is an impressive wearable device, but it's hardly a major departure from the previous, more affordable, model.