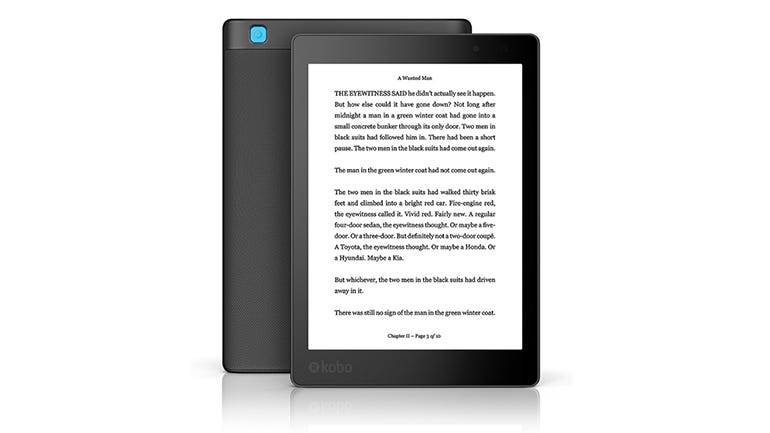 Although it might seem that there's only one maker of e-readers in town, Amazon does have competition. Kobo is probably its biggest rival, and the company has an extensive portfolio that includes several e-readers, e-reading apps, an online book store and a high-street retail partnership for UK hardware sales with WHSmith and Argos.

The Aura ONE's 7.8-inch screen seems refreshingly large for me -- I'm used to living with the 6-inch screens of Kindles -- and I found it very comfortable to read on the larger screen. The E Ink Carta display has a resolution of 1,872 by 1,404 pixels, or 300ppi -- the same pixel density as on the Kindle Oasis and other newer models.

Screen refreshes are nice and quick in general. But every so often the device does a full screen refresh. This is jarring to the point of real irritation, and it can't be escaped. The screen can be set to refresh at intervals of between one and six pages, but you can't turn it off completely.

While the screen might be a good size for reading, after using a Kindle Oasis regularly for some time I found the Aura ONE's dimensions -- 138.5mm wide by 195.1mm deep by 6.9mm thick -- a little unwieldy. The Oasis, at 122mm by 143mm by 3.4-8.5mm (including cover), is considerably easier to grab in the hand. Weight-wise there's almost no difference: the Aura ONE weighs 230g while the Oasis comes in at 240g with its cover. For me, the Kindle has the edge on hardware usability.

Kobo is keen to let us know that the Aura ONE is waterproof -- a feature of its previous e-readers. In particular, it should survive up to 60 minutes in 2 metres of water (an IPX8 rating), which should more than handle an accidental dunking in the bath.

The power button is on the back of the casing, but everything else is managed by touch. There are plenty of typefaces and sizes offering 11 fonts and over 50 styles in all. There's even the ability to fiddle with line spacing and margins to get everything just so. One market where the larger screen will win plaudits is those who need bigger text and like the idea of fewer screen refreshes than are required on the Kindle range.

Stats provide information on how much of a chapter has been read, how much time to go to the end, how much of a book has been read and how long it will take to complete. You can tap-and-hold a word for a definition, highlight a section, add a note, or do a search for the word online via Wikipedia or Google: there's also a web browser, although it's a beta feature and rather clunky.

The Aura ONE has a screen lighting system it calls ComfortLight PRO, which can use an ambient light sensor or be managed by hand. Generally, it's better for us to have less blue light at nighttime and more during the day. So if you tell the Aura ONE when 'bedtime' is, it will reconfigure the backlight accordingly to use less blue light. Alternatively, you can adjust the setting manually.

As well as purchasing e-books from the Kobo portal, you can connect via wi-fi (802.11b/g/n) with OverDrive, the service that many UK public libraries use to facilitate e-book lending, and transfer e-books manually to a PC via a USB connection. Plenty of file formats are supported: EPUB, EPUB3, PDF, MOBI, JPEG, GIF, PNG, BMP, TIFF, TXT, HTML, RTF, CBZ and CBR. This is a wi-fi only device -- in contrast to Amazon's products, there's no built-in mobile data functionality.

Kobo says the Aura ONE's 8GB of storage is enough for 6,000 e-books, while the battery is rated as good for a month's operation (although this will depend on the usage level). The Kindle Oasis has just 4GB of storage, but the same battery life rating as the Aura ONE.

Kobo's Aura ONE is a functional e-reader with good font management and screen backlighting, but its jarring screen refresh system could use some attention. Perhaps Amazon might look at adding waterproofing and blue light control to its range of Kindles, as these are areas where Kobo is ahead of the game.