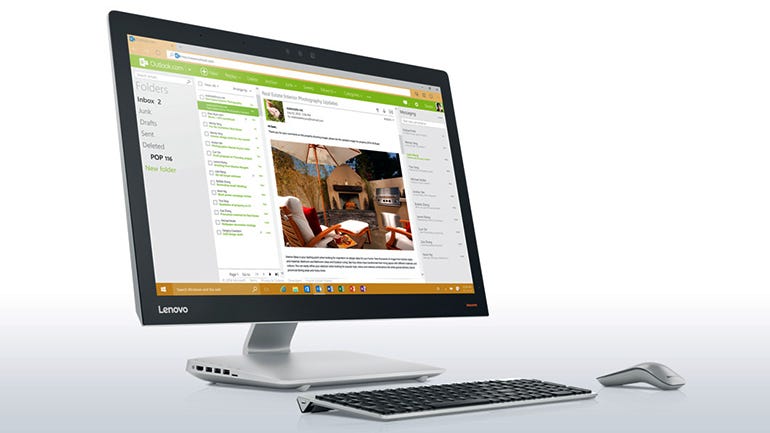 Microsoft made headlines -- and cleverly managed to steal some of Apple's thunder -- when it unveiled the eye-catching 28-inch Surface Studio recently. You could argue, though, that Lenovo got there first with its IdeaCentre AIO 910.

Announced in the summer with very little fanfare, the 27-inch IdeaCentre AIO 910 has an adjustable stand similar to that of the Surface Studio, which allows you to lower the touch-sensitive screen down to desk level and then tilt it right back like a digital drawing board. And while it may not have innovative accessories such as the Surface Dial, the IdeaCentre does include an Intel RealSense camera, which has potential for technologies such as face- and gesture-recognition (although RealSense technology has been sadly under-used by most manufacturers thus far).

In the UK, Lenovo currently only sells the entry-level version of the IdeaCentre AIO 910, which costs £1,000 (inc. VAT, or £833.33 ex. VAT, or $1,149.99 in the US). As that price suggests, this model has a relatively modest specification, the most obvious limitation being the 27-inch screen's 1,920-by-1,080-pixel (81.6ppi) resolution. To be fair, the screen is bright, clear and colourful, and it will work well for presentations, in showrooms or with point-of-sale applications that also make use of the touch controls. That model obviously won't be able to compete with the 4K and 5K displays offered by some of its rivals for high-end graphics and video work, but there is a 4K model already on sale in the US for around $1,600, which should also reach the UK soon, so it might well be worth waiting to see how that compares with the $3,000 Surface Studio.

Even this entry-level model still provides an attractively designed desktop PC that's versatile enough to handle a variety of tasks. Along with the 27-inch touchscreen, the IdeaCentre includes a Core i5-6400T processor running at 2.2GHz (2.8GHz with TurboBoost), 8GB of RAM, a 1TB hard drive, and discrete Nvidia GeForce 940M GPU with 2GB of dedicated video RAM. That's quite a good specification for a system in this price range -- certainly better value than the entry-level 21.5-inch iMac from Apple -- and you could also save about £100 if you prefer to opt for a conventional display that doesn't include touch functionality.

Admittedly, the IdeaCentre's GeekBench 4 scores of 3336 and 8883 for single- and multi-core performance repectively aren't going to break any records, but the IdeaCentre is more than adequate for running Microsoft Office and other business applications. The GeForce 940M graphics card also comes to the rescue here, managing a very respectable 60 frames per second (fps) when running the Cinebench R15 OpenGL test, so it'll certainly be able to handle HD video-editing and presentations work if required. The only real disappointment is the sluggish 1TB (5,400rpm) hard drive, which delivers write and read speeds of just 113.5MB/s and 116.7MB/s under the ATTO disk benchmarks. You notice it most, though, when you first turn the IdeaCentre on, as the machine takes a leisurely 30 seconds to boot into the Windows desktop, followed by another 20 seconds of cursor spinning before it finally hits cruising speed.

You could just go and make a cup of tea while the IdeaCentre is booting first thing in the morning, but Lenovo does come up with a neat trick to help out here. The IdeaCentre's hard drive is housed in the base of that flexible stand, so you just need to remove a single screw to open up the drive bay and pop in a replacement to improve performance. It's a shame, though, that you can't upgrade the RAM just as easily.

We like the fact that the four USB 3.0 ports, Ethernet and HDMI interfaces are all housed in the base of the stand too, making them very easy to reach -- a really smart idea that the Apple iMac and some other AIO systems would do well to imitate. And one last clever touch here is the fact that the HDMI port can switch between input and output modes simply by pressing a button next to the port itself. This allows you to use the 27-inch screen as an external monitor for a laptop or set-top box -- even when the IdeaCentre itself has been powered down to save energy.

The modest resolution and performance of this entry-level version of the IdeaCentre AIO 910 certainly leave room for improvement, and we look forward to seeing the top-of-the-range 4K model when it arrives in the UK. But even in its current form, the clever design and versatile features included in the IdeaCentre AIO 910 make it an attractive and competitively priced option for anyone who needs a large-screen all-in-one desktop PC.