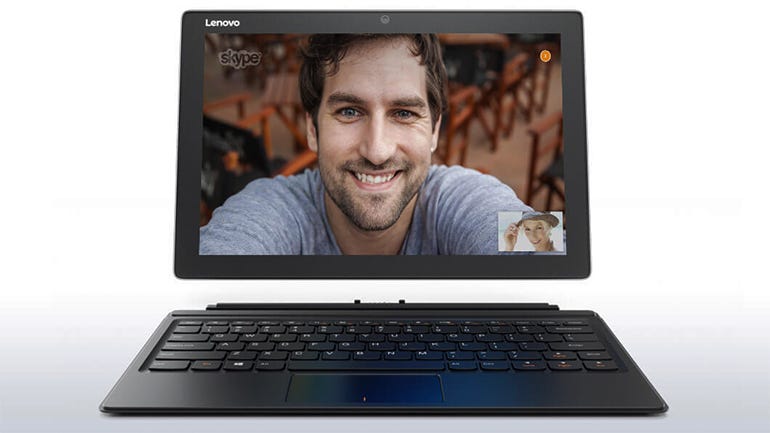 Lenovo's Miix series sits in its Ideapad line, and so might not be a professional's first port of call when looking for a laptop. But these two-in-one laptop/tablet hybrids come in three sizes, and may well be worth checking out. The 12.2-inch Miix 510 is the mid-range offering, flanked by the 10-inch Miix 310 and the high-end 12-inch Miix 700.

If imitation is the greatest form of flattery then Lenovo is flattering Microsoft's Surface devices with the Miix 510, whose design is very reminiscent of the Surface Pro 4. The specifications of the two devices don't match, and nor do the prices -- Lenovo comes in lower on both fronts.

Lenovo has brought its signature watchband hinges to the tablet's kickstand. Two of them sit on each side of the stand, which occupies the bottom half of the back of the device. The hinges are made from 280 individual pieces of stainless steel, and are used to set the kickstand at -- almost -- any angle required.

The hinges top out at 150 degrees, so they don't rotate enough to let the tablet quite sit flat on a desk. But they are solid, and hold the tablet securely at any angle up to that maximum point.

The kickstand locks away tightly when the tablet is used separately from the keyboard, or when the Miix 510 is closed down, but it's easy to free up thanks to large nicks in the tablet's short edges. One-handed setup isn't possible, but the system is as ergonomic as they come.

The tablet's entire backplate and sides are made from aluminium, lending it a solid, well-protected feel. It's easily scratched, though: without even trying I managed to spoil its smooth, freshly minted looks. If you want to keep this device looking pristine, you'll need to use the provided soft case.

As a two-in-one hybrid, the Miix 510 tablet is, of course, designed to be used freestanding, with all the computing and connectivity housed within it. Volume controls, the power button, and an audio jack are on the right, while USB-C and USB 3.0 ports, and the power jack, are on the left. There's a slot under the kickstand for either a MicroSD card or a SIM card depending on the configuration chosen.

At the back there's a five-megapixel camera, while the front-facing camera is a two-megapixel unit. The entire top edge is covered by ventilation slots. The fan on my review sample kicked in fairly often, but it's quiet and only really disturbed when I was working in total silence. Fan noise should easily be masked by noise from a radio playing in the house or office, or ambient café sounds, for example.

Even when simply streaming a YouTube video, the back of the tablet section got quite warm -- with or without the fan running to help with cooling.

There are speaker grilles on the left and right short edges, and sound quality is reasonable but not outstanding. The Dolby Audio app has settings for Movie, Game, Music, and Voice modes as well as a personalisation option. None of them made a great deal of difference to the overall quality, which is quite trebly and not best suited to intense movie watching or music listening. That said, the speakers are perfectly OK for video calling without a headset.

The 12.2-inch, 1,920-by-1,200-resolution touchscreen is surrounded by a sizeable 17mm bezel. This does help avoid accidental screen taps when working in tablet mode, but when compared to a device like Lenovo's own Yoga 910 or Dell's XPS 13 two-in-one (both admittedly premium machines that lack detachable screens) the value of smaller bezels becomes immediately apparent. Quite simply, they allow a much larger display to be crammed into a small chassis.

The IPS screen itself is sharp and bright, with good colour, and is comfortable to work with. However, it's very reflective and while viewing angles are good, that reflectivity causes problems with screen sharing if there's a light source like a window anywhere in the vicinity.

The keyboard attaches to the tablet via magnets that lock it at the right position immediately and are strong enough to keep both sections together without fear of slipping. There is absolutely no fiddling necessary to start working in laptop mode.

The keys themselves are well made and robust, with that distinctive Lenovo curved-belly design. The main keys are large and well spaced, though the Fn row is only half height and the Enter key is a little squished. There's quite a lot of travel on the keys and a slight flexing in the board that might trouble heavy-handed typists. There was nothing here, though, that prevented me touch typing at my usual speed.

The touchpad is relatively small, but responsive enough to sweeps, presses, and gesture controls.

Anyone thinking of carrying the Miix 510 around or holding the tablet for long periods will want to know that on its own the tablet weighs 900g and with the keyboard added in the total weight rises to 1.25kg. There are some (admittedly not many) fully-fledged one-piece laptops that can compete with this.

The Miix 510 comes with a Lenovo Active Pen with 2,048 levels of pressure sensitivity. It's a well-designed stylus that's a comfortable size to hold and use. Now that Windows 10 includes Windows Ink Workspace, with its Sketch Pad, Screen Sketch and handwritten Sticky Notes support, there's plenty of built-in opportunity to use the Active Pen even without additional apps.

The Active Pen comes with a holder that slots into the single USB 3.0 port on the chassis, effectively rendering it useless for attaching peripherals. Surely Lenovo could have thought of a better method. There's also a holder loop for the Active Pen on the soft case, although this sits on the outside of the case, and the pen can easily be dislodged. Again, Lenovo could have put more thought into this.

The processor in my review sample was an Intel Core i5-7200U, but off-the-shelf models currently available in the UK don't offer that processor. There are two configurations, both with sixth-generation Core CPUs:

Lenovo claims up to eight hours of battery life for the Miix 510. This may be achievable, but users will have to be very frugal to get there. To give one example from my testing: I set the screen to stay on constantly -- as it would be if I were working solidly with no breaks -- and set to 40 percent brightness. I then used web apps, did some video streaming, and did a range of generally low-level work tasks that did not push the system particularly hard. The battery went from 100 percent to 17 percent in five hours under these conditions.

The Lenovo Miix 510 has some attractive plus points. The kickstand is very solid, the connection between the tablet and keyboard sections is robust, and the keyboard itself is well made. The fact that the Active Pen is bundled rather than an optional extra is welcome, although the inability to store it on the system without disabling the single USB 3.0 port is problematic.

However, there's a lot of heat output through the backplate, and the fan may prove too noisy for those who prefer a quiet environment.

The big problem with the Lenovo Miix 51 is its disappointing battery life. That could prove a deal-breaker for many.