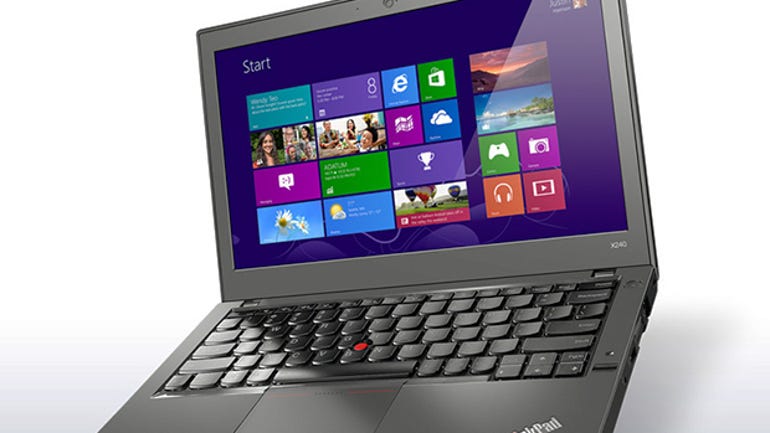 Lenovo knows plenty about designing notebooks for business users, and the ThinkPad X240 brings the popular ThinkPad X2x0 ultrabook series right up to date. There are some impressive features in the ThinkPad X240, including a touchscreen option and a choice of screen resolutions. There's also a two-battery solution that Lenovo claims can deliver up to 17 hours of battery life.

The ThinkPad X240 is a 12.5-inch ultrabook with a 30.5cm-by-20.8cm footprint that boasts some impressive features. It's a little chunky at 2.03cm thick, and Lenovo has not been able to employ a tapering design because of its two-battery configuration (of which more later). The chassis is not entirely a block, though, as there's a very slight thinning at the front edge.

The ThinkPad X240 is designed to take the kinds of knocks regularly encountered by business traveller. Its roll-cage design, carbon-fibre lid and magnesium underside make it feel very solid — without overly compromising the weight, which starts at 1.36kg. You'll have to carry more weight if you opt for the longest-lasting battery configuration, though.

The overall design is typical Lenovo. The soft-touch finish to the lid and tiny status light on the 'i' of the ThinkPad logo are instantly recognisable. Open up the notebook and the same can be said for the familiar-looking spill-resistant keyboard.

The keys on a ThinkPad always seems to be larger than those in other notebooks of a similar size, and that's down to careful design. The slightly curved lower edge of each key adds a tiny amount of surface area, and keys are ever so slightly concave. Both of these factors help to boost typing accuracy. Infrequently used keys are slightly thinner, allowing more space to be allocated to commonly used keys.

The punctuation keys on the right side are narrower than the regular keys, while the Enter key is double height but not double width. The Fn keys are half-height with a rectangular design, their shortcut functions indicated by large, easily-visible icons. Useful non-standard function keys add the ability to call up the application switcher and then move through applications with repeated presses, and give instant access to Windows Explorer.

There's a keyboard backlight with two brightness settings that you can activate using the Fn key and space bar. The on/off button and a fingerprint sensor are both embedded in the chassis to the right of the keyboard.

Some people might find the relatively slight key travel takes a little getting used to, and there's barely any audible click when keys are pressed. However, confident touch-typists should find the X240's keyboard a pleasure to use.

The trackpad is large and dominates the wrist rest. Its integrated buttons feel firm under the fingers. Interestingly the whole trackpad depresses wherever you press it, with right- and left-click sensitivity in the bottom quarter.

A second set of mouse buttons sit at the top of the trackpad, marked with red horizontal lines; these serve a red pointing stick that sits in its usual location between the G H and B keys. There's a scroll function built into the trackpad, which also supports Windows 8 gestures.

The screen measures 12.5 inches across the diagonal and is easily accommodated within the lid section, with a bezel measuring at least 1cm all around. The IPS panel delivers an exceptionally bright and clear display, with fabulous viewing angles: our review unit had the standard non-touch 1,366-by-768 pixel display, but you can specify 1,920 by 1,080 and also select a touch option.

Our ThinkPad X240 review unit ran on a 1.6–2.6GHz Intel Core i5-4200U processor with 4GB of 1,600MHz DDR3 RAM. Other models listed at Lenovo's UK website at the time of writing run on the less powerful 1.7GHz Core i3-4010U. Graphics are handled by the integrated Intel HD Graphics 4400 GPU and there's no discrete GPU option.

The storage configurations include both SSD (up to 256GB) and hard drives (up to 1TB). Our review model had a 500GB hard drive spinning at 7,200rpm, plus a 24GB Toshiba SSD ExpressCache to facilitate fast OS boot and improved application performance.

Lenovo does not overburden its notebooks with third party apps, although Norton Internet Security is provided and ready to be activated, along with installers for Evernote and Skype. You also get a range of Lenovo tools and utilities such as SugarSync cloud storage and a good power manager.

Wireless options include and single- or dual-band wi-fi (we had dual-band 802.11a/b/g/n/ac) and Bluetooth 4.0, along with WiDi (Wireless Display). Some models include integrated wireless broadband (Ericsson N5321 HSPA+), which can also be added to any configuration for an extra £50, and NFC (Near-Field Communications). Our review unit lacked both the HSPA+ module and NFC.

A 720p webcam sits above the screen, flanked by dual noise-cancelling microphones for better audio quality when videoconferencing. Ports and connectors are somewhat sparse: there just two USB 3.0 ports, one on each edge, plus a Mini-DisplayPort and and a VGA port on the left, along with the power input and a smartcard reader. The right edge carries a headphone/microphone combo jack, an SD card slot and the Ethernet (RJ-45) jack. If you have specified it, the mobile broadband SIM card slot is here too.

A quick note on that VGA port. It's nice to see this legacy technology built into such a modern notebook: business travellers will like it because it's still widely used in many offices, and can be accommodated here without a dongle. VGA support is one advantage of having a relatively deep chassis — many ultrabooks simply can't support the depth required.

We mentioned earlier that the ThinkPad X240 has dual battery options that can deliver up to 17 hours of life. There's a three-cell 23.5Wh battery built into the chassis at the front, which is inaccessible. Lenovo's Power Manager app identifies it as the built-in battery, and it's good for up to around 4 hours of life.

At the back of the chassis, in the usual location, there's a removable battery that can be either a 3-cell 23.5Wh unit or a choice of 47Wh or (cylindrical) 72Wh 6-cell units. Lenovo's Power Bridge technology allows you to hotswap the removable rear battery without powering down.

The ThinkPad X240's Windows Experience Index of 5.1 (out of 7.9) is determined by the lowest-scoring subsystem, which is for Graphics (desktop performance for Windows Aero). The remaining scores were 6.9 for Processor (Calculations per second), 6.4 for Gaming Graphics (3D business and gaming graphics performance) and 5.9 for both Memory (RAM Memory operations per second) and Primary hard disk (Disk data transfer rate).

To put the X240's WEI score in context, we ran Maxon's demanding Cinebench R15 benchmark, which has CPU and OpenGL components, and compared the results with those from Microsoft's Surface Pro 2, which is based on the same Core i5-4200U/HD Graphics 4400/4GB RAM platform. Not surprisingly, the results were very similar:

Both the ThinkPad X240 and Surface Pro 2 are well equipped to handle mainstream business applications and moderately demanding graphics workloads, including light gaming. As far as disk performance is concerned, the ThinkPad X240's 7,200rpm 500GB hard drive delivers 124.8MB/s writes and 172.1MB/s reads under the Atto Disk Benchmark — respectable for a hard disk, but a long way short of SSD speed.

Even with two 3-cell batteries with a combined rating of 47Wh, the ThinkPad X240 comfortably got us through a working day from a full charge where that day included at least two hours of web use. Our battery life estimates suggest that, with a mix of workloads and middling screen brightness, you should typically get around 6 hours of life from this configuration. With the 47Wh 6-cell option (a total of 70.5Wh with the fixed 23.5Wh front battery), this is expected to rise to around 8h, topping out at around 11h with the 72Wh 6-cell rear battery (a total of 95.5Wh). Lower screen brightness settings and less demanding workloads will boost these already-impressive battery life figures.

Sound output is loud enough for delivering multimedia presentations direct from the notebook to small groups, although it does verge on the tinny at the highest volumes.

The Lenovo ThinkPad X240 impresses on every front. The configuration options are plentiful with touchscreen, HDD/SSD, mobile broadband and different Windows versions all in the mix. We like the legacy VGA port, the usable keyboard, the tried-and-trusted design and the solid build quality.

The twin battery configuration with hotswapping will please mobile professionals who need to be assured of a day's work away from mains power. Overall, this is an excellent business ultrabook.