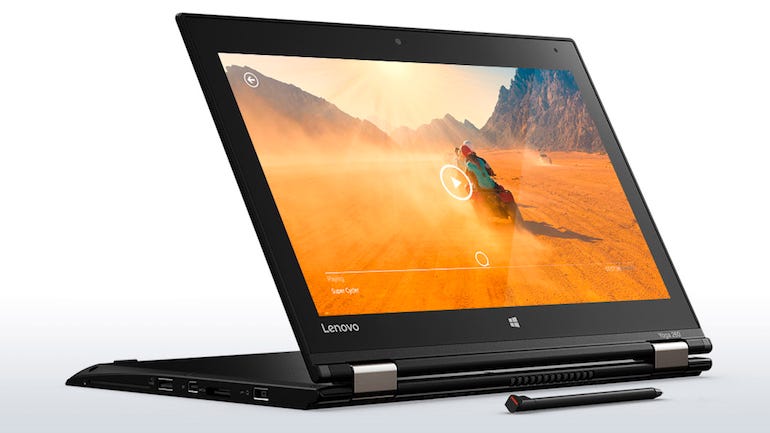 The Lenovo's new ThinkPad Yoga 260 convertible ultraportable has the classic Yoga characteristic of a rotating screen for multi-mode usage. It retains the tough ThinkPad chassis design that appeals to those who need to carry their laptop regularly. Throw in a stylus, some neat handwriting-recognition software and half a terabyte of storage in the top-end configuration, and Lenovo just might have come up with a superb small-format computer.

The ThinkPad Yoga 260's 12.5-inch screen is crammed into a thin, compact chassis measuring 31cm wide by 22cm deep by 1.7cm thick that will pop easily into a small rucksack.

The Yoga 260's 1.3kg weight is easily bettered -- Lenovo's larger 13.3-inch Yoga 900 weighs the same, for example. However the ThinkPad Yoga 260 is protected by a tough chassis and many people will likely carry it without a protective sleeve. There's a little more flex in the lid than we'd like, but the fact that this notebook meets the MIL-STD-810G ruggedness standard inspires confidence.

The design is typical ThinkPad, with the logo and its characteristic red LED dot on the 'i' that pulses if the machine is sleeping rather than turned off.

Inside, the Lenovo keyboard uses keys with a distinctive rounded belly that makes them easier to hit accurately. However, the Yoga 260's relatively small size means that the main alphanumeric keys are on the small side, and some keys are rather squeezed. The Fn keys are rectangular and about half-height, allowing space for 16 keys providing access to 30 different features.

Slightly narrow AltGr, PrtSc and Ctrl keys sit to the right of the space bar, and the cursor block is also smaller than the main alpha keys. The compromise that took the most getting used to on our review unit was the small quartet immediately left of the double-height enter key comprising the square and curly bracket combo keys and the @/' and ~/# pairings.

This detail may be very important to stubby-fingered typists, although we didn't have a significant usability problem. The keys themselves are very comfortable under the fingers, with plenty of travel and reassuring responsiveness.

When you swivel the screen right round to use the ThinkPad Yoga 260 in tablet mode, the whole keyboard retracts until the keys are flush with the surround. They won't depress, and are protected from accidental damage while you hold the whole laptop in one or two hands. We wish all convertible laptops performed this trick, and that Lenovo had found a locking solution to protect the trackpad and buttons too.

The screen isn't quite so impressive. Because this is a convertible there's a large bezel -- including the frame of the laptop's lid, it amounts to about 15mm on the short edges and 25mm on the long edges. This makes the 12.5-inch screen look a little lost -- although the tradeoff is that your thumbs have plenty to grip onto in tablet mode, so you avoid accidentally tapping the touchscreen.

The swivel mechanism relies on two solid hinges that hold the screen precisely where you leave it. If you're in laptop mode and have gone well past a right-angle, the base is heavy enough that the whole thing doesn't threaten to topple backwards when you use the touchscreen.

The IPS panel is quite reflective, and attracts finger grease, which make it less pleasant to use than some. Viewing angles are excellent, however.

Lenovo equips the Yoga 260 with a stylus -- the ThinkPad Pen Pro -- that sits in a housing on the right edge. This is good: styli need to be housed on-device if you're to stand any chance of not losing them. Even better, the pen's battery charges while docked, so it's always ready to use.

Lenovo's WRITEit software lets you enter handwritten input into text fields. This is as useful for writing web search terms as it is for working with forms-based data-capture tools, and we found the handwriting recognition to be fast and accurate. If you do a lot of tablet-based data collection and input, WRITEit could be a real boon.

As noted above, there are three preconfigured models of this notebook on Lenovo's UK website, all of which use Intel 6th-generation (Skylake) processors. We were sent the mid-range Core i5-based model to review. Here are the key differences between the three models:

If you want the benefits of Windows 10 Pro and half a terabyte of storage in a preconfigured model, you'll need the most expensive option. Alternatively, you can customise the £889 model with these options, and also specify up to 16GB of RAM, adding NFC and a smartcard reader too, if you wish.

You can't specify more than 512GB of storage, or a bigger battery than the standard, non-removable, 4-cell unit.

As far as connections are concerned, there's a pair of USB 3.0 ports, a Mini-DisplayPort, a full-sized HDMI port and a proprietary Lenovo OneLink+ port for connecting a docking station. There's a microSD card slot for storage expansion. Physical volume buttons on the right edge are handy when you're working in tablet mode; this is also where you'll find the power button.

There is a 720p webcam above the screen and an integrated fingerprint reader on the wrist-rest area. The right edge also houses a SIM card slot, but there's no means to take advantage of that in any configuration option. Presumably it's present for bespoke configurations to fill bulk orders.

The 4-cell battery, which Lenovo rates as good for up to 10 hours' life, is one of the of the ThinkPad Yoga 260's more disappointing features. In everyday usage during testing, we found that it got through a working day involving mainstream document creation/editing, email and web browsing tasks. But if you make significant use of streaming media, you may well need a power boost during the day.

The Lenovo ThinkPad Yoga 260 is a compact and attractive convertible laptop. It's sturdily built, includes a very functional stylus that's stored on the device, and is available with the latest Core i3, i5 and i7 processors.

That said, it's not perfect: we'd have liked the option for a higher-capacity battery, and for the SIM card slot to be supported, for example. Even so, if you're in the market for a convertible ultraportable, Lenovo's ThinkPad Yoga Pro 260 should definitely be on your shortlist.