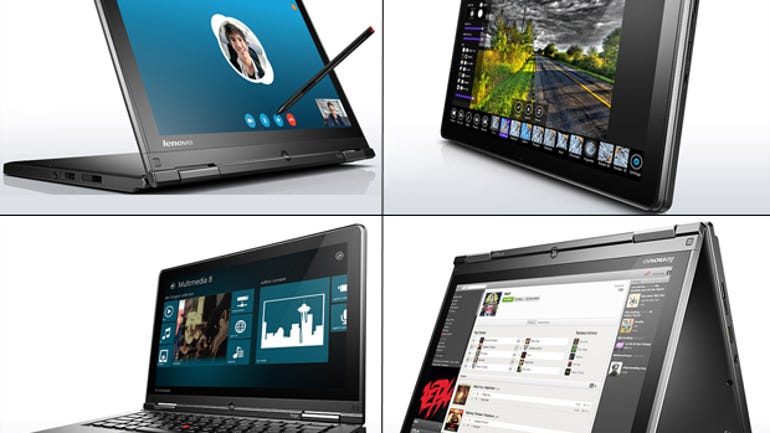 Lenovo's consumer-focused Yoga notebooks and tablets have been around for a while. The notebooks emphasise 'multimodal' use, which basically means that the screen can swivel to give you alternate viewing and working modes. The Yoga concept has now made its way to the ThinkPad range in the shape of the ThinkPad Yoga. With a range of smart features on offer, including pen-based input in the top-end model, Lenovo appears to have come up with a winner.

The ThinkPad Yoga is a solid, extremely well-built notebook with a tough exterior and a magnesium alloy frame. The lid is more flexible than we'd like (but less flexible than many), while the base is barely flexible at all. There's a weight premium to be paid for all this system's features though, as it weighs in at 1.57kg (3.46lb).

Lenovo pushes the 'multimodal' concept by claiming no fewer than four usage modes. 'Laptop' speaks for itself. 'Tent' involves you swivelling the screen way past 180 degrees to stand the ThinkPad Yoga up in an 'A' configuration with the screen facing outwards. 'Stand' has the same effect of facing the screen outwards to the audience, but this time the keyboard sits face down on the desk. 'Tablet', of course, involves flipping the screen through a full 360 degrees and laying it flush to the back of device. You can then hold the whole unit in the crook of an arm, or leave it flat on a desk or on your lap, using only the screen as your working surface.

When you're working in tablet mode, the keyboard ends up facing outwards and can be vulnerable, as well as making an uneven surface to hold onto. Lenovo's "Lift 'n' Lock" solution is smart and efficient, though: as you swivel the screen past 180 degrees, the keyboard surround rises up and the keys themselves lock in position. By the time you're in tablet mode you couldn't press a key if you wanted to, and the flat surface that's presented means the whole area is protected.

Lenovo caters for those who do a lot of work in tablet mode by providing two of its four preconfigured ThinkPad Yoga models with a digitizer stylus. This fits securely in a housing on the front right of the notebook; in a neat touch, Lenovo has also given the stylus a red tip that's visible when it's in situ.

The other potential issue with working in tablet mode — having swift access to the Windows 8 Start and desktop screens — is dealt with by putting a Windows button beneath the screen. All of which leaves us with just one tablet-mode issue: that 1.57kg of weight becomes noticeable if you need to hold the ThinkPad Yoga in the crook of an arm for very long.

The keyboard itself is up to Lenovo's usual high standard. The island-style keys have a slight outward curve along their bottom edge, making them marginally larger than standard and lending a distinctive look. The keys feel great under the fingers, and you should have no trouble reaching your maximum touch-typing speed.

Lenovo's distinctive red pointing stick sits between the G, H and B keys and mouse buttons are embedded into both the top and bottom of the trackpad, all of which depresses a reasonable distance. Unfortunately it doesn't lock out like the keyboard, so when you pick the ThinkPad Yoga up to use in tablet mode it's easy to put what might be undue pressure on the trackpad.

The ThinkPad Yoga's IPS touchscreen is larger than normal for a standalone tablet at 12.5 inches across the diagonal. The lower-end models have a resolution of 1,366 by 768 pixels, but our review sample — which at £1,149.99 (inc. VAT; £958.32 ex. VAT) was the most expensive in the range — came with a full-HD resolution of 1,920 by 1,080 pixels, plus a Gorilla Glass finish to help protect it against scratches. The screen's matte surface doesn't completely cut out reflections, but it's possible to work comfortably in a good variety of lighting conditions.

Touch sensitivity is very good, as is stylus responsiveness. Viewing angles are excellent in both the vertical and horizontal planes, making the ThinkPad Yoga a suitable platform for delivering presentations to small groups.

This is a Haswell-based notebook with Core i3 and i5 options available preconfigured; you can also select a Core i7 processor if required. Our top-end (preconfigured) review sample had a 1.6-2.6GHz Core i5-4200U with 8GB of RAM. The entry-level Core i3 model has 4GB of RAM.

There are plenty of storage options, with up to 1TB available. Our review had a 500GB hard drive, but the upgrade to 1TB would add just £32 to the price. All of the HDD choices spin at a relatively sedate 5,400rpm. You can also opt for faster, lower-power SSD, with up to 500GB available. The default configuration includes a 16GB mSATA SSD cache to help boost performance.

NFC is not supported as standard, but you can add it for no extra charge. Perhaps Lenovo is trying to evaluate demand for NFC in notebooks, as offering it for free seems a little odd.

Gigabit Ethernet connectivity is available, but one of our few gripes about this notebook is that there's no on-board RJ-45 slot. You need to use a dongle or stump up for the OneLink dock which, for the better part of £100, adds RJ-45 plus video, USB and audio ports to a charging brick.

Overall, connectivity options are not great. There are just two USB 3.0 ports, one on each side of the chassis, only one of which is powered. There's also a Mini-HDMI port and a 4-in-1 media card reader on the right, plus a headset/microphone combo jack and the power connector on the left.

Finally, there's a 720p camera sitting above the screen for your video conferences.

The ThinkPad Yoga runs Windows 8.1 Professional, and the Windows Experience Index (WEI) benchmark is no longer readily available through the control panel. However it can be found and run, and as in previous incarnations of Windows delivers component scores (subscores, out of 7.9) and an overall rating corresponding to the lowest subscore. The numbers are as follows:

As usual, the CPU and memory subsystems lead the way, with the (integrated) graphics being the potential bottleneck. The GPU will only be an actual bottleneck if you expect to run graphically demanding workloads on this system, though. For mainstream business usage, it should be just fine.

Lenovo quotes up to 8 hours' life for the ThinkPad Yoga's 47Wh lithium-polymer battery, which — in true ultrabook fashion — is not removable. In our tests, we found it perfectly capable of keeping us going for a day's work away from mains power on fairly light use with some idle periods during the day.

The ThinkPad Yoga's multiple screen orientations make it suitable for delivering presentations or other data to small audiences. Its sound output has enough bass and undistorted volume to handle this use case.

There are only two things we dislike about the ThinkPad Yoga. It's heavy, which will be particularly noticeable if you need to carry it a lot and/or work standing up with the notebook in tablet mode. It's also short of on-board connectors — an Ethernet port being the most glaring omission.

Otherwise it's difficult to fault. The simplicity of switching to the various multimodal configurations is particularly praiseworthy, and the chassis feels sturdy enough to accommodate them for the product's lifetime.