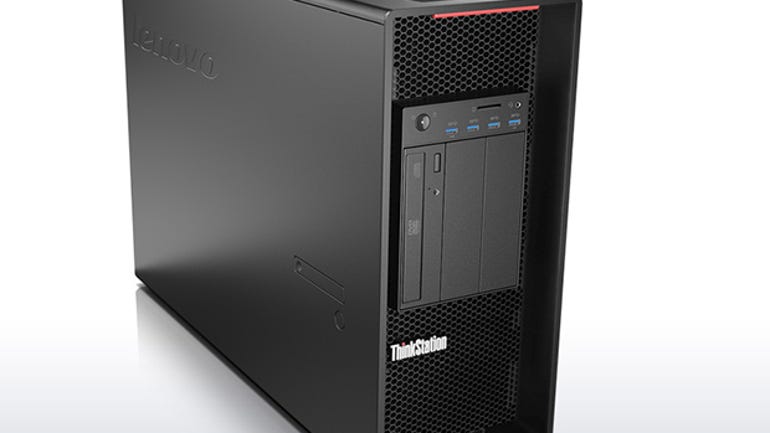 Part of Lenovo's first major reworking of the IBM ThinkStation family, the top of the range ThinkStation P900 Workstation incorporates the latest Haswell-based Xeon E5-2600 v3 processors and high-performance DDR4 memory. The end result? A real powerhouse of a machine, ideally suited to professional users running a range of demanding applications from CAD/CAM and 3D modelling to medical imaging and number-crunching data analytics, with a number of extra Lenovo extras to help it really stand out from the workstation crowd. The ThinkStation P900 Workstation starts at £1,685 (ex. VAT), although our review configuration cost considerably more -- £8,442.50 (ex. VAT).

Like a lot of workstations, the ThinkStation P900 comes in a large and very industrial-looking black casing, designed to sit under or next to the operator's desk. Open it up, however, and what you see is quite different from the insides of most other workstations. In fact it's more like peering under the bonnet of a modern car, with all the works hidden away from view under plastic mouldings. It's also one of the most modular workstations we've come across, with just about everything that might possibly need to be serviced clearly marked with a red tab (or 'touch point' in Lenovo-speak).

Press or pull at these tabs and out pop the associated modules -- from the massive 1,300W power supply, to cooling fans and baffles plus all the disk drives and quick-release catches used to secure plug-in adapters. You can even swap the motherboard without the need for tools, making the ThinkStation P900 one the easiest workstations to upgrade or service on the market.

On the downside there's only one power supply, but maybe we've just got used to redundancy on servers and workstation buyers won't be concerned. Moreover, it's one of the quietest workstations we've ever tried, with carefully designed airflow baffles and just three large-diameter fans, all helping to keep the noise down to a comforting hum -- unusual for a workstation at the high end of the performance spectrum.

A great deal inside

Some care is needed, however, as what you choose here can have a big impact on both performance and price. The review system, for example, came with a pair of workstation-specific E5-2687W v3 processors (note the W on the model number) contributing almost £4,500 to the price all by themselves.

For that sum, however, you do get a pair of very fast (3.1-3.5GHz) chips and blistering performance from a total of 20 cores (or 40 processing threads, if you prefer) spread across the two sockets.

Our review unit also came with 128GB of the latest DDR4 RAM, clocked at 2,133MHz, and upgradeable to a massive 1,024GB (yes, that's 1TB of RAM!) for seriously memory-hungry applications. Add to that an Nvidia Quadro K5200 graphics card and the review system was able to fly through the benchmarks we threw at it, and do so with ease.

On Cinebench R15, for example, it turned in a render score of just over 182 frames per second (FPS) with a combined processing rating of 3,063. Both results are significantly higher than those for the Dell Precision Tower 7810 we tested late last year (fitted with the same Quadro K5200 plus slightly slower 2.3-3GHz E5-2650 v3 processors), making the ThinkStation P900 the fastest workstation we've examined to date.

A total of 14 storage devices can be fitted inside the P900 chassis with specially designed carriers to take a mix of 3.5-inch and 2.5-inch drives that plug straight into the backplane, doing away with a lot of messy wiring.

Further storage can be accommodated in external bays at the front of the chassis, which can also take so-called Flex modules. These can, for example, add an IEEE 1394 port, an eSATA interface or a 29-in-1 card reader. These are cabled direct to associated Flex connectors on the motherboard rather than take up PCIe slots with add-in adapters, although we couldn't quite get our head around the value or need for this option.

A RAID controller is another option, to protect against hard disk failure, while the choice of disks is largely up to you. The review system, however, came with just one 4TB magnetic disk to hold data, plus a 512GB M.2 SSD drive for the OS paired with a standard 512GB SSD for caching.

Other standard features include two Gigabit Ethernet ports for LAN attachment and 12 USB ports. These are liberally distributed around the chassis with four front-mounted USB 3.0 connectors plus four more USB 3.0 and four USB 2.0 ports at the back. Any of the usual suspects can be attached to these, including an Android phone which, using an app, can be employed to gather and analyse diagnostics direct from the workstation hardware.

Eight PCIe expansion slots are also to be found inside the ThinkStation P900 chassis, in a variety of flavours, to further enhance the workstation's capabilities. Extra graphics cards and monitors can be added, for example, or GPU accelerator cards to boost processing performance.

Lenovo's new ThinkStation P900 is a very accomplished and capable workstation that's well up to handling whatever task you care to throw at it. We'd buy one, and we recommend that anyone looking for a high-end professional workstation should add it to their list too.