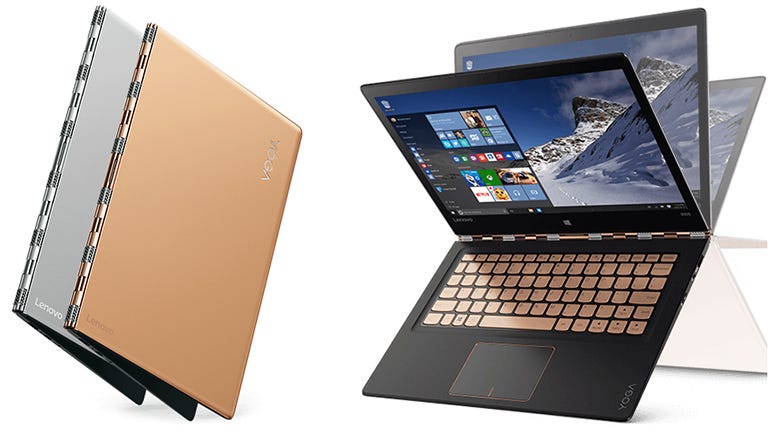 Last year the Lenovo Yoga 900 caught our attention as a high-quality convertible 13.3-inch ultrabook with an innovative 'watchband' hinge mechanism. The 12-inch Yoga 900s retains the watchband hinge and is generally very similar to its predecessor (including starting at the same £999.99 inc. VAT price), but is a smaller, slimmer and even lighter take on the ultrabook format.

The Yoga 900s has a carbon-fibre chassis, which helps to make it a tough and durable laptop. There is some flex in the lid section, but that's to be expected when the whole computer measures just 12.8mm at its thickest point, with the lid comprising around 5mm of that. Lenovo claims the Yoga 900s to be "the thinnest convertible laptop on Planet Earth" (as of November last year, at any rate).

The watchband hinge is a defining feature of this ultrabook. As on previous models, this very visual piece of engineering -- comprising 813 individual components -- allows the screen to rotate the screen through 360 degrees, supporting four modes (see above): standard laptop mode; a 'stand' mode with the screen facing outwards and the keyboard laying face down; an A-shaped 'tent' mode; and tablet mode with the screen rotated the full 360 degrees.

This degree of flexibility may appeal, but it's worth noting that the keyboard doesn't lock when the screen is rotated, making it rather vulnerable to rough handling or accidental knocks. That's not unusual, but we've seen examples where the keyboard does lock, and prefer the protection this offers.

As with the Yoga 900, we're sceptical of Lenovo's claim for its Auto Lock system: the hinge is supposedly configured to make it easy to open and close the laptop one-handed. Closing works fine with one hand, but we found that two hands were needed to open the shell.

The Yoga S comes in two colour schemes: Champagne Gold and -- as on our review unit -- Silver. The silver keys picked out against a dark grey surround look a little tacky to us, but obviously this is a matter of taste.

What's certain is that the keyboard must fit into a relatively small chassis, which may make typing a little awkward for those with larger hands. The Enter key and top row of shortcut keys are particularly small, for example. Oddly, the four arrow keys -- which are often reduced in size on laptop keyboards -- are a little larger than average on the Yoga 900s.

The biggest potential issue as far as typing goes, though, is that the keys themselves don't depress very far. We weren't especially troubled by this, but some users may find the keys unresponsive.

The trackpad is perfectly effective, though we found we were more prone to accidentally hit it on this smaller-format device than when using larger laptops. It's easily disabled with a function key if necessary.

The 12-inch IPS touchscreen on the Yoga 900s is quite reflective, and its 2,560-by-1,440-pixel resolution (245ppi) is lower than its 13.3-inch predecessor's 3,200 by 1,800 (276ppi). It's a bit tricky having two document windows open side by side on the smaller screen, but that's a perennial issue with sub-13.3-inch laptops. The Yoga 900s also supports Lenovo's Active Pen stylus, but we weren't able to test this as it wasn't supplied with our review sample.

Because the Yoga 900s is so light, we tended to use tablet mode more, especially for viewing video. Consequently, we were more forgiving of the relatively large screen bezel, which is required so that you don't keep activating the touchscreen accidentally when holding the device in tablet mode.

We found the Yoga 900's audio subsystem rather better than average, but for its successor the word 'average' will suffice.

Ports and connectors are relatively minimal, but do include a full-size USB 3.0 port and a USB Type-C port. The power input also doubles up to provide USB 2.0 connectivity. The only other connector is a 3.5mm headset jack.

Lenovo claims that the 4-cell battery in the Yoga 900s will deliver up to 10.5 hours of video playback from a full charge. Using it for mainstream document creation/editing, web browsing and media consumption, we found that a typical five-hour stint reduced the battery from 96 percent to 40 percent. On that basis, most users should get a day's work out of the Yoga 900s with a bit of battery power to spare.

Lenovo's Yoga 900s offers good battery life, the clever watchband hinge and sub-1kg weight that makes working in tablet mode a practical choice. But there are irritations too -- notably the keyboard, which is a bit too light-touch for our taste.

By adding the 12-inch Core M-based Yoga 900s to its convertible ultrabook stable, Lenovo offers a clear choice: if you value portability and battery life and can live with a lower spec, go with the Yoga 900s; if you value Core i5/i7 CPU power, SSD storage up to 512GB and higher screen resolution, and don't mind lugging a bit more bulk and weight, choose the Yoga 900.