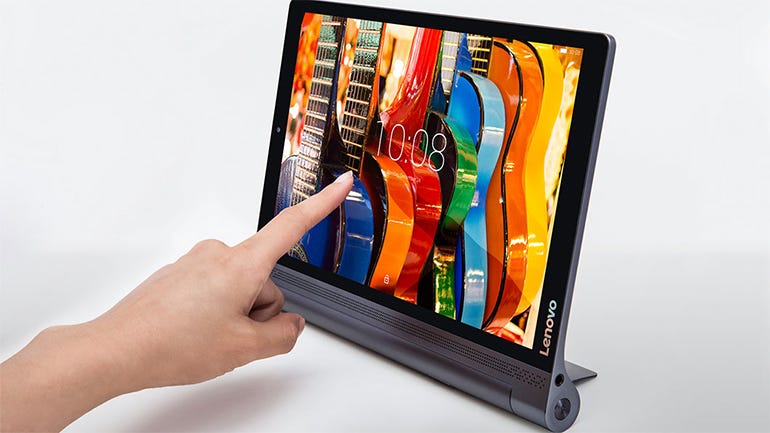 The continued slow-down in tablet sales and proliferation of Android tablets has created a challenging market for tablet vendors. To gain traction, it helps if an Android tablet has at least one novel or unusual feature.

Lenovo's Yoga Tab 3 Pro has a 10.1-inch display and fits into a new Tab 3 range that also includes 8in. and 10in. non-Pro versions. All three models come in both wi-fi-only and wi-fi-plus-LTE configurations. The Yoga Tab 3 Pro, reviewed here, is the only one with a built-in pico-projector that can deliver a 70-inch display, according to Lenovo. It also has an integrated JBL sound bar and Dolby Atmos technology for improved audio quality.

UK and US pricing has yet to be finalised, but the wi-fi-only model costs €349, while the wi-fi-plus-LTE configuration comes in at €599.

The Yoga Tab 3 Pro is beautifully made. Lenovo doesn't do things by halves in the Yoga range, and the Yoga Tab 3 Pro ticks the boxes in terms of both attractive looks and robustness. There's a fair amount of metal in the chassis, while much of the back has a faux leather finish that's soft to the touch and helps with grip. This might succumb to scratches and stains over time, though. The solid build makes for a weight of 665g.

Visual appearance is rather different to the norm thanks to a tube that sits along one long edge. It's a very similar design to last year's Yoga Tablet 2 Pro, and it performs the same functions.

The tube inevitably means the tablet sits on a desk with one long edge slightly raised. The tilt of just over 10mm makes it easier to view content, especially in landscape mode, and we found it made typing a bit more comfortable than usual too. There is, though, a definite 'right way up' for this tablet when it's sitting on your desk, which is something you don't usually need to think about.

The tube provides hinge system for a small kickstand that's vital to making the most of the Yoga Tab 3 Pro. The stand is anchored to the back of the casing when not in use, and you pop it free by pressing a large central button.

You can use the stand to prop up the back of the tablet on a desk, a configuration Lenovo calls 'tilt' mode. When set flat on a table, the kickstand will hold the tablet at angles almost up to 90 degrees -- this is Lenovo's 'stand' mode. The flexibility means you can easily find a good angle for viewing content. But if you want to prod the touchscreen when it's resting on its stand, beware: even a feather-light tap could topple the tablet backwards when it approaches an upright angle.

Lenovo also suggests you might want to use 'hang' mode, where the large hole that's left in the hinge when popped away from its anchoring button is dropped onto a wall hook.

The Yoga Tab 3 Pro's integrated pico-projector can't be used when you're working in 'stand' mode as it's flush to your desk, but it has a free line of sight to a projecting surface in all other modes.

Lenovo says the Yoga Tab 3 Pro can project images up to 70 inches across -- a considerable increase on the Yoga Tablet 2 Pro's 50 inches. We found its performance to be very impressive. Its 50-lumen brightness makes it viable to use in dimly-lit rooms during the daytime, although in a brightly lit office it will likely suffer from washed-out colours. An app lets you select pre-saved content, and is very easily bypassed.

The projector is easily switched on and off by holding down a button in one end of the tube that houses the stand hinges (the other end accommodates the power button) or tapping the icon in Android's pull-down shortcuts tab. A quick tap of the same hardware button calls up the focusing control. It's all pretty simple to get to grips with, which gives real utility both at work and at home.

Lenovo has included four front-facing JBL speakers and Dolby Atmos, which is aimed at giving a flowing, three-dimensional sound experience. The tablet also supports Dolby Digital Plus, which is streamed alongside Netflix HD content. Sound quality is very good, although we couldn't try Netflix as it wasn't bundled.

The Yoga Tab 3 Pro runs on a quad-core Intel Atom x5-Z8500 running at 1.44-2.24GHz, supported by 2GB of RAM. Screen-tap responses weren't lightning fast, but media streamed smoothly and in general we had no major complaints. Wireless connectivity is via 802.11ac wi-fi and Bluetooth 4.0, with GPS and the aforementioned optional LTE mobile broadband. There's a 13-megapixel rear camera and a front-facing 5-megapixel camera.

Our review unit had 32GB of internal eMMC storage (although the UK online product page currently lists 16GB), with 21GB available for use. Storage expansion is available via a MicroSD card slot.

In addition to the software associated with the pico-projector, Lenovo throws in a few extras to augment what you get with Android 5.1. These include: Lenovo eFrame, which provides automated picture viewing with music; Lenovo Sketchpad, which lets you doodle on top of whatever the screen is showing and save screenshots (potentially useful with the projector in a business context); a file browser; Lenovo SYNCit for cloud backup of contacts, SMS and call logs; and Evernote. Netflix should also be preinstalled, but wasn't on our review sample.

There's also the Smart Side Bar. This is something of a Lenovo staple, and if enabled in the device settings can be called up by a sweep inwards from outside the right short edge. It provides a menu of shortcuts to apps and settings.

Smart Window 2, which allows multiple app windows to be opened at the same time, should also be a free download for anyone who buys this tablet, but wasn't provided on our review device.

The button configuration is unconventional. As already noted, the power button and an on/off button for the projector sit at opposite ends of the tube that supports the stand. The projector button is marked as such, but there's no tactile difference between the buttons and we constantly got them confused. The Micro-USB charging slot and volume rocker are on one short edge, with the headset jack on the other.

A covered slot under the hinge accommodates the MicroSD and Micro-SIM slots (the latter only if you have chosen the LTE model, of course).

The tube is also used to provide additional battery capacity, which amounts to a generous 10,200mAh overall. According to Lenovo, this delivers up to 18 hours of life from a full charge. We used the Yoga Tab 3 Pro over a weekend for a range of tasks, and didn't need to recharge it once. Lenovo is so bullish about battery life that it provides a USB On The Go powerbank for charging other devices. We didn't get this with our review sample, so couldn't test it.

At the time of writing there's no option with a bundled keyboard -- the only accessory on offer is a protective sleeve. This is arguably a missed opportunity if Lenovo wants to attract professional users.

The projector is undoubtedly the star of the Yoga Tab 3 Pro show, and it should prove useful both at work and at home. It's easy to operate, and is complemented by good battery life and an above-average audio subsystem.

Other plus points include a mobile broadband option and a high-quality 299ppi screen. It may not be a huge step up from the Yoga Tablet 2 Pro, but the Toga Tab 3 Pro is a significant improvement.