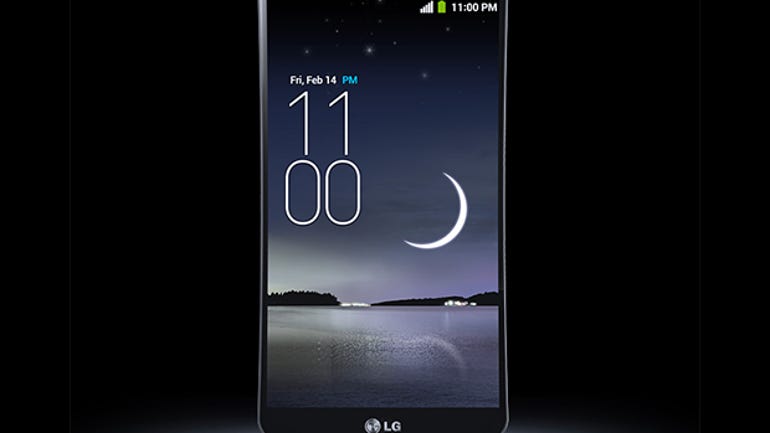 LG breaks new ground with the G Flex, a handset with a curved form factor and a backplate that can magically mend itself if it gets scratched. This 6-inch 'phablet' certainly stands out thanks to its innovative design, but it's not without its disappointments: at almost the same price as Samsung's Galaxy NotePRO 12.2 tablet and more expensive than almost every other smartphone, the G Flex should be closer to perfection than it is.

Most of the pre-launch talk about the LG G Flex concerned its design, and although there's more on offer here (there are some interesting aspects to how LG handles Android, for example), design certainly takes centre stage.

That's because the LG G Flex is curved. You won't be dropping this handset into your back pocket, even if the pocket is large enough to accommodate the phablet's 81.6 by 160.5 by 79.9mm dimensions. It simply feels oddly awkward in a way that flat handsets don't.

You can, in fact, bend the G Flex away from its curved shape to a more conventional flat design. But this isn't something you'll be doing in order to pocket it: we found that it required two hands and a fair bit of pressure to get the handset flat — and as soon as we relieved the pressure, it popped back into its preferred curved form.

Why build a curved handset? LG says a phone that follows the curve of your face inevitably leads to improved voice quality by placing the microphone close to your mouth. However, people we called on the G Flex did not gush with positive comments about how good we sounded.

Another reason LG gives for the curvature of the G Flex is that it makes movie watching and games playing more enjoyable. The viewing advantage of curved screens may hold for larger devices like TVs, but we're not sure it translates to a 6-inch phablet. We didn't notice any great improvement in the enjoyment of either movies or games.

Nor does the LG G Flex's shape make it more or less comfortable to hold than other similarly sized phones. LG has copied the design convention it adopted in its excellent LG G2 of putting the power button and volume rockers on the back. They sit in a vertical configuration beneath the 13-megapixel camera's lens and flash. There's an infrared zapper here too, incidentally.

With the 5.2-inch LG G2, we found this system awkward initially, but did get used to it. On the much larger frame of the 6-inch LG G Flex it works very well. Once we purged the idea of side-mounted buttons from our muscle memory, prodding the rear buttons with a forefinger became second nature. The location works equally well for right-and left handed people.

The volume rockers have small silver nubbins that make them easy to find when the handset is in a bag or pocket — something you'll appreciate if you use your phone for listening to music a lot. If the LG G Flex is sitting on a desk, you reactivate its screen with a double tap rather than picking it up and reaching for the back button. We found this an efficient and responsive system with the G2, but less so here as taps had to be fairly firm to register.

With the buttons located on the back, the only role for the edges of this handset in terms of connectivity is to house the MicroUSB and headphone slots. Both are on the bottom edge.

The back of the LG G Flex is made from a shiny, not particularly grippy, material featuring a membrane layer that slowly bounces back if depressed. LG calls this a 'self-healing back cover', which, up to a point, seems to be true: we lightly scratched the surface with keys and the scratch did indeed disappear within a couple of hours — although look hard with the phone side-on and you can still see traces.

We tested further by being a bit rougher with the key-scratching, and must have permeated the membrane layer: this second scratch looks distinctly permanent.

The screen technology here is a new one: P-OLED. The P stands for 'Plastic substrate' and its use is a key factor in it the screen's flexibility. Although the use of a new technology is laudable, there is definite fuzziness to text; not only that, but whites, such as the background on web pages, can take a blueish tinge if you're viewing at an angle. We expect crisper, sharper images from a top-end handset.

The LG G Flex is an LTE handset that accommodates a MicroSIM. You can't get the back off, so the SIM lives in a slot on the left edge.

The SoC is Qualcomm's Snapdragon 800 MSM8974, which includes a quad-core CPU running at 2.26GHz. This is complemented by a healthy 2GB of RAM. Wi-fi is bang up to date, supporting dual-band (2.4/5GHz) 802.11a/b/g/n/ac, Wi-Fi Direct, DLNA and the ability to act as a hotspot. Bluetooth 4.0 is present, along with NFC and the aforementioned infrared zapper. The 13-megapixel rear camera is accompanied by a 2.1-megapixel front-facing camera.

The MicroUSB port supports USB On the Go (OTG) and USB Host, so you could add external data devices such as the Kingston DataTraveller MicroDuo . We attached ours and it was instantly recognised.

LG does not offer MicroSD card support, so unless you use a USB OTG device, you're stuck with the 23.7GB of free internal storage from the 32GB that's installed. This is always irritating on a handset that purports to be top of the range.

The Android version is 4.2.2 (Jelly Bean), which will disappoint those who like their high-end handsets to have the very latest OS version (4.4 KitKat in Android's case). LG's Android skinning is far from light touch but on the whole it meets with our approval. We won't discuss everything LG has done, but a few favourites deserve a mention.

The notifications bar offers a feature called QSlide, which allows you to pop apps up on top of whatever you're doing. You can make these items more or less transparent using a slider. Dual Windows lets you run two apps at once. Not all apps are compatible with these features, but they are good attempts to maximise the screen area.

There's a clever popup that appears when you attach devices. Attaching our Kingston DataTraveller MicroDuo, for example, called up relevant apps, including a file explorer, video and music players, and the gallery. When we attached headphones we were offered music and video players, the YouTube app and the phone dialler.

We like the fact that you can left- or right-align the dial pad and keyboard to assist with one-handed operation, and simply swipe the front touch buttons to get them to all rush to one or other side of the screen for much easier access. You can also reconfigure the front touch buttons into your preferred order and add a fourth to launch LG's Quick Memo app or pull down the notification panel. You can even hide the buttons in selected apps to give them access to the entire screen.

Smart On settings use the front camera to pause video when you look away and keep the screen on when you're looking at it, overriding any display timeout you may have configured.

The final tweak we will mention is Slide Aside, which lets you swipe leftwards on the screen to park up to three running apps off-screen, and then pull them in as needed. Although a neat idea, it's our least favourite Android tweak in terms of execution. LG could rethink this into a system that's more ergonomic to use on a device of this size.

In addition to the interface tweaks LG adds a number of apps to Android. Quick Memo and Notebook are our favourites. Both are obviously note-takers, the former including the ability to grab a screenshot and scrawl on it before sending it off to an email recipient, the latter offering more sophisticated note-making features.

The G Flex has a 3,500mAh battery — a curved lithium-polymer unit. In our anecdotal experience the battery lasts longer than average, and you may even be able to go two days between charges with a light usage pattern. We found it to be an extremely fast charger too, so it should be feasible to top up the battery quickly during the day should the charge level become a concern.

LG may have hit the headlines with the G Flex's curved shape, but there's more to this phablet than a curved chassis. The moderate screen resolution and lack of storage expansion are disappointing, but the way LG is working on enhancing Android shows great potential.

Having said that, LG's UI tweaks are in many cases already found in its G2 handset and will no doubt be found in future products. Overall the G Flex, although interesting, is simply way too expensive.