Google recently launched Android Wear 2.0, an operating system for its smart watches. The entire OS has been refined and revamped.

To help with the launch of the new OS, Google and LG collaborated and came up with two Android Wear devices: The $250 LG Watch Style and $350 LG Watch Sport.

The approach is similar to the Nexus program, where Google would work with a phone maker and release a Nexus phone alongside the launch of the latest and greatest version of Android. Only now Google is making its own phones under the Pixel brand.

For the past 10 days I've been using the LG Watch Sport, the bigger, better-equipped of the two new Android Wear 2.0 watches available right now.

It's hard to gauge just how big the Watch Sport is when looking at photos. Comparing it to Samsung's Gear S3 makes it look as if the two devices are nearly the same size, with the Watch Sport being only slightly thicker. In person the watch is big. Huge, even.

Surely LG had to increase the size of the Watch Sport to make room for all of the sensors, wireless radios, and larger battery packed inside it.

A few days after the initial shock, however, any issues with the size of the watch were all but forgotten. It's big, yes, and it's an adjustment when you first put on the Watch Sport, but it's not something I found myself constantly thinking about.

On the right side of the watch are three buttons. Two are shortcut buttons dedicated to launching apps or functions of your choosing with a press. The middle button rotates for scrolling on various screens. The buttons are firm and responsive.

The watchband on the Watch Sport can't be swapped out for a different band, meaning you're stuck with the look of the watch you purchase.

Overall, the Watch Sport isn't a bad looking watch, but it's not nearly as classy looking as the Gear S3 or Apple Watch.

The LG Watch Sport is the first watch I used with built-in LTE connectivity. I activated the Watch Sport on AT&T as soon as I received it, thinking the experience would completely change the way I view carrying my phone with me at all times. (There's also a Verizon compatible model.)

I was wrong. In fact, I found almost no real use for an LTE connection on the watch. At least not enough use to justify paying $10 per month.

It'd be nice if there was a way for the watch to recognize it's currently connected via Bluetooth to my phone and not alert me twice for every text message I receive.

Battery life on the LG Watch Sport is horrible. There's no other way to say it. Each day over the course of my testing, I would take the watch off the charger around 6:30 am. Every single night, by 8 pm, the watch would be completely out of battery and end up on the charger.

Fourteen hours of battery life for a smart watch is very disappointing. If you were to go out after work, odds are you would have a dead watch on your wrist, incapable of showing you the time, let alone providing alerts and counting your steps -- unless, of course, you were to take your charger to work with you and recharge towards the end of your work day. But who wants to do that?

I had cellular connectivity enabled every day, save for one day where I disabled it, throughout my testing. The day where I used the watch with its cellular functionality disabled didn't provide better battery life.

In comparison, I can get through two full days of use out of the Apple Watch Series 2 and over two days of use from the Gear S3.

Outside of battery life, the Watch Sport was fast and responsive when using apps or scrolling through the Play Store. I can't recall an instance of the watch slowing down or struggling to complete a task.

Google originally announced Android Wear 2.0 in May of 2016, with a release timeframe of later that same year, sometime in the fall. Ultimately Google delayed the release of its wearable OS until mid-February.

With the new OS, Google added a dedicated Play Store, complete with stand-alone apps that no longer require the watch to be connected to a phone. There's also a new keyboard that's far too small to actually type on, plus a handwriting feature that makes it easy to scribble quick responses to a message. Paying with the watch through Android Pay is now possible, as long as the watch is equipped with NFC.

Google Assistant, the company's virtual personal assistant is now just a button press away. Google also redesigned how notifications look, and the way apps are arranged in Android Wear 2.0.

With a few extra months worth of polish, Android Wear 2.0 should look and feel like a finished product. In practice, it feels more like one of the beta developer previews Google released while working on the update.

Some times Google Assistant will launch and work without issue. Other times, an error message would show up stating the Watch Sport didn't have any sort of data connection, despite having a connection to my phone and Wi-Fi network.

Another annoyance is the inability to use the rotating dial to scroll on every screen. Adding a dial as a scroll mechanism, similar to the Digital Crown on the Apple Watch or rotating bezel on the Samsung Gear S3, makes a ton of sense. Using swipes or gestures on the tiny screens isn't always the best method to accomplish a task.

For example, in the Android Pay app you cannot scroll down using the dial. You have to swipe up on the display in order to view more information. Conversely, when viewing the list of apps installed on the watch you can use the rotating dial to scroll up or down.

An inconsistent experience only confuses and frustrates users.

The LG Watch Sport just didn't live up to my expectations. After Google's Pixel smartphone launch, the company set the expectation of refined hardware, with a user experience to match.

Neither the hardware nor the software on the LG Watch Sport live up to that expectation.

Going into my time with the LG Watch Sport, I considered the Samsung Gear S3 the best smartwatch available for Android users. That opinion remains unchanged. 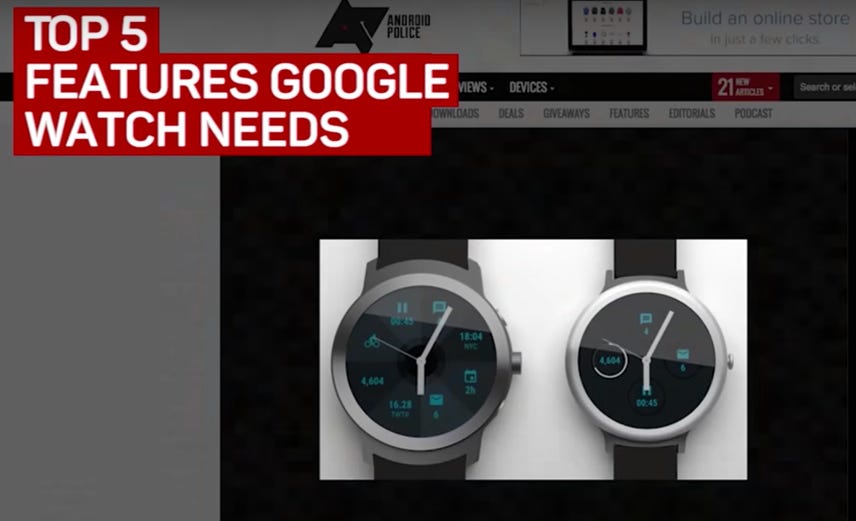