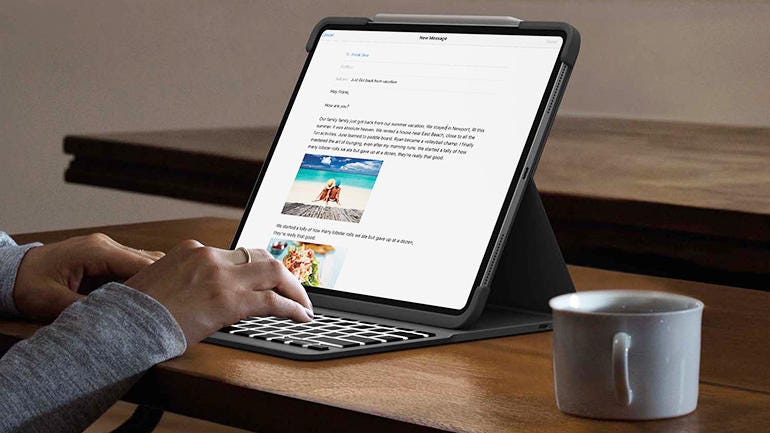 Apple's iPad Pro has proved to be one of the more popular additions to the iPad range in recent years, despite its typically high prices. And, as always, Apple followed up with an equally expensive range of accessories, including the Apple Pencil -- now in its 2nd generation, priced at £119 ($129) -- and the Smart Keyboard Folio that weighs in at a hefty £179 ($179) for the 11-inch model, or £199 ($199) for the 12.9-inch.

Unsurprisingly, third-party manufacturers have leapt in with a number of more affordable alternatives, including Logitech with its popular Create keyboard, which was one of the first third-party accessories to adopt Apple's Smart Connector.

The Create is a little bulky though, and weighs in at 725g, so Logitech has now come up with the Slim Folio Pro, which is a slimmer, lighter alternative for the third-generation 12.9-inch iPad Pro, and new 11-inch iPad Pro that were launched last October.

The design of the keyboard shows few signs of compromise, though. Both versions measure just 22.5mm (0.9 inches) thick -- with the iPad inside -- while the weights are 552g (1.22lbs) for the 11-inch model, and 707g (1.56lbs) for the 12.9-inch. The moulded rubber case feels pleasantly soft and flexible, but is sturdy enough to protect the iPad when you're out and about. Logitech pays good attention to detail, too, maintaining a 1mm gap between the iPad screen and the keyboard when the case is closed, in order to avoid scratching the screen. There's a large magnetic clasp that holds the case shut, but also includes a small pocket for the Apple Pencil that holds the stylus in the right position for wireless charging on the side of the iPad.

When you open the case and stand the screen upright for typing, a contact sensor automatically turns the keyboard on, activating the Bluetooth connection and keyboard backlight. However, lowering the screen down into 'Sketch' mode, deactivates the keyboard again in order to save power.

The 12.9-inch keyboard that we tested feels firm and comfortable when typing. The keys click firmly into place as you type each character, and the Slim Folio Pro feels more responsive than other slimline keyboards that we've tested. The keyboard also has an adjustable backlight, which can be controlled using the top row of Function keys, while other keys control media playback, volume, or take you to the Home or Lock screen.

The only noticeable compromise in the design of the Slim Folio Pro is that it has abandoned the Smart Connector, which provides both connectivity and power for the Create keyboard, and opted for a Bluetooth connection instead. Bluetooth pairing is quite straightforward, but it means that the Slim Folio Pro needs its own rechargeable battery, which according to Logitech should last for three months if used for around two hours per day.

The battery charges via a USB-C port, though, so you can charge it from the USB-C port on the latest iPad Pro models while it's in use. Trailing the USB-C cable around the back of the keyboard isn't the most elegant charging solution, admittedly, but you shouldn't need to do it very often, and in all other respects the Slim Folio Pro provides a well designed and affordable alternative to Apple's own range of accessories.