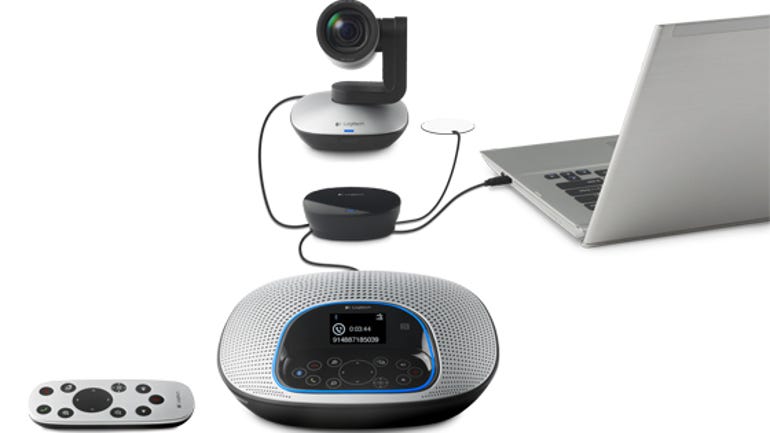 Video conferencing is an increasingly mainstream business activity, no longer restricted to high-level executive meetings in expensive telepresence suites. The trouble is, according to Logitech, that most regular meeting rooms are ill-equipped to handle video, usually just providing a speakerphone. This leaves many meeting participants no option but to huddle around a laptop equipped with a relatively low-end webcam.

The CC3000e ConferenceCam comprises a Bluetooth and NFC-enabled speakerphone, a full-HD pan-tilt-zoom camera, a dockable remote control and a powered USB hub with an under-table mounting kit.

The speakerphone has a 24cm-square footprint and stands 6.8cm tall, weighing 810g. It houses a pair of omnidirectional full-duplex mics, with echo and noise cancellation, allowing users to have natural-feeling conversations with remote participants from within 6m (20 feet) of the unit. The touch control panel lets you start and end calls, displays call-related information, and provides volume and camera controls — which are replicated on the 10-foot-range remote that docks neatly into the speakerphone.

The speakerphone is Bluetooth-enabled, allowing you to conduct audio conferences via your smartphone — and if your phone supports NFC, pairing is simplicity itself. An LED surrounding the speakerphone's fascia glows solid blue in an active call, blinks when a call is being received or is put on hold, and shows solid red when a call is muted.

The 590g camera can be mounted on a flat surface, a wall or on a tripod via its standard mounting thread. It's a full-HD 1080p/30fps unit with onboard UVC 1.5 and H264 SVC support for improved bandwidth control. It has a 90-degree field of view, and can be panned, tilted and zoomed (10x lossless) from the speakerphone control panel or the remote (you can also do this for a remote CC3000e unit in another location if you're using Microsoft Lync).

Usefully, you can set a default position for the camera on wake-up, and activate this at any time via the Camera Home key.

Logitech has maximised layout flexibility by connecting everything via a small (9.5cm by 7.4cm by 3.4cm, 50g) powered USB 2.0 hub. You get 5-metre (16-foot) Mini-DIN cables for attaching the camera and the speakerphone, and a 3m (10ft) USB 2.0 cable for connecting to the PC or Mac that's hosting the video conference. If you want to keep the hub and wiring out of the way, you can use the provided mounting kit to attach it to the underside of a desk or table.

The CC3000e is officially compatible with a range of UC platforms, including Microsoft's Lync and Skype, Cisco's WebEx and Jabber, Vidyo and the Logitech-owned LifeSize ClearSea.

We found the ConferenceCam CC3000e components simple to set up and use. For the most part it's straightforward plug and play, although you'll need to tell your video conferencing software to use the CC3000e's camera and microphone rather than your laptop's. Although the kit may often stay in one place, it certainly wouldn't be too much hassle to bundle it into a box and take it to another room.

During the test period we mainly used the ConferenceCam CC3000e with Google Hangouts over ZDNet's office internet connection (which delivers around 30Mbps) to meet with US-based colleagues, and found video and audio quality to be excellent. The video picture is clear and sharp, if a little over-saturated, while the camera pans, tilts and zooms reasonably smoothly. Audio is particularly impressive: the combination of full-duplex noise-cancelling mics and a good internet connection makes conversation with remote participants very natural. The speakerphone delivers impressive volume, too: you'll have no problem hearing what's going on, even towards the back of a decent-sized room.

Although it's no impulse buy at £699 (inc. VAT; £582.50 ex. VAT) or $999.99, we think Logitech's ConferenceCam CC3000e is very good value. With the addition of a computer to host the video conferencing software and a decent-sized monitor (or a projector), you can transform a humble meeting room into a convincing low-end telepresence venue.