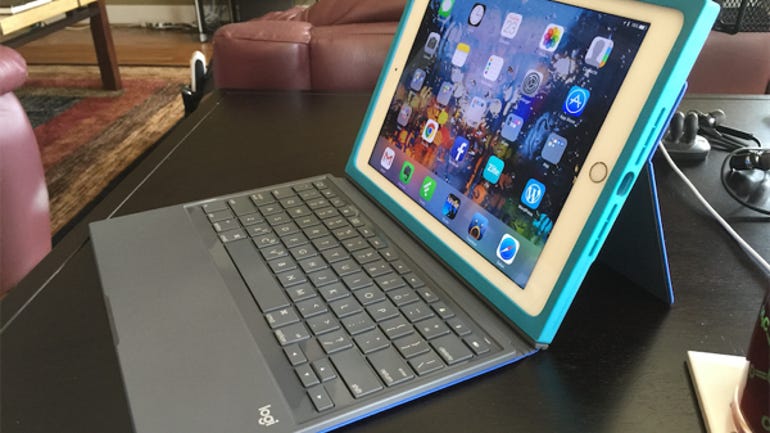 The three iPad cases with Logitech's Logi brand are distinctive due to the square corners and optional bright colors. They are designed to protect the iPad Air 2 from drops up to six feet. The three cases have different features with the most productive being the detachable keyboard. This is the model we are reviewing.

The Logi BLOK Protective Keyboard Case consists of the square case for the iPad Air 2 and a detachable keyboard. The latter attaches to the iPad case with magnets which make it easy to detach the tablet to use without the keyboard.

The case has a kickstand behind the iPad that supports varying the viewing angle from 20 degrees to 70 degrees. The unusual square corners are reinforced to provide extra protection for the most vulnerable area of the iPad when dropped. I didn't test this with my expensive iPad Air 2.

There are cutouts in the case to provide access to all controls and ports of the iPad, with the exception of the volume and power buttons. These are pressed on the marked spots on the case to operate. The case is slightly thicker than competing keyboard cases, but this is a reasonable trade-off for the extra protection those cases lack. Logitech was able to add this protection while keeping the case relatively thin (0.87 inches ) and light (1.4 lbs). Those figures include the case and the keyboard.

Inserting the iPad Air 2 into the Logi BLOK Protective Keyboard Case is very difficult, even when following the instructions. It took me over five minutes, and more than once I felt I was going to damage the iPad. Getting it out of the case is just as hard so plan on leaving it in for the duration. This is a sore spot in an otherwise good case design.

The thin keyboard unit attaches to the BLOK case with a magnetic strip running the width of the keyboard. This is much like the keyboards for the Surface tablets, although the keyboard on the BLOK pairs over Bluetooth.

The key layout is typical for iPad keyboards and all keys are where you expect them. The keys have just the right resistance when pressed and good key travel. This is one of the best iPad keyboards I've used, and that covers most major models. Typing on the BLOK feels as good as on most laptops and better than many. I really like using this keyboard.

The keyboard houses the batteries for the keyboard which Logitech claims has a battery life of four years. Uniquely, rather than use a sealed internal battery Logitech uses two user-replaceable coin batteries. These are the readily available CR2032 3v batteries. There is a little tray that slides out to give access to the batteries.

The Logi BLOK Protective Keyboard Case from Logitech is a relatively lightweight case that offers a fair amount of protection for the iPad Air 2 for drops up to six feet. The kickstand that props up the iPad is adjustable and makes for a sturdy arrangement when using the case as a laptop.

The keyboard is outstanding and one of the best for the iPad that I've used. The unusual coin batteries that power the BLOK are rated for a life of four years and are replaceable by the user.

The iPad Air 2 in the case can be easily detached from the keyboard to use as a tablet. It's a little heavy but not unbearably so; the weight is a fair trade-off for the protection it provides. Since the kickstand is on the back of the case it can be used without the keyboard which can be handy for watching video.

Logitech has created an iPad Air 2 case that bridges the gap between heavy ruggedized cases and those without much protection. The Logi BLOK Protective Keyboard Case is a joy to use and is available from Logitech for $129.99.