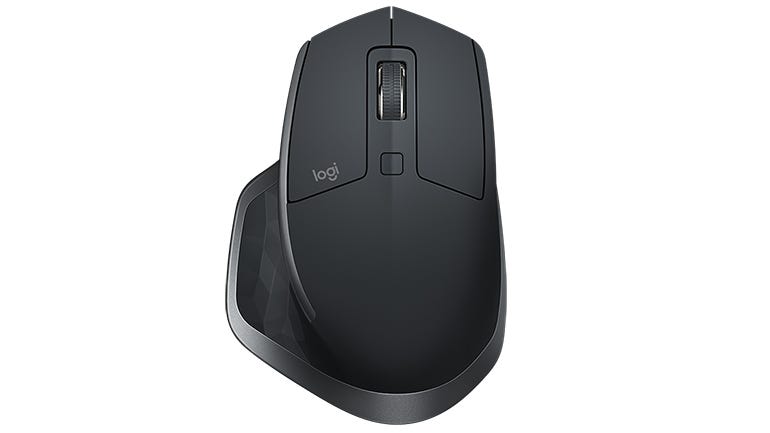 We don't often get over-excited by the arrival of a mere mouse, but Logitech's new MX Master 2S includes the company's updated Options software, which looks as though it could be genuinely useful for many business users -- or, indeed, anyone who owns more than one computer.

The hardware design of the MX Master 2S is fairly conventional, and very similar to that of Logitech's earlier MX Master -- which, oddly, is still on sale at the same price as the 2S model. It's a wireless mouse, available in a variety of colours, and can use either Bluetooth or Logitech's proprietary wireless USB adapter to pair with your computer(s). There are the usual two buttons and scroll-wheel on top, with a thumb rest protruding from the bottom-left edge, which also acts as a clickable button (and makes the mouse resolutely right-handed, unfortunately). There's a side-to-side scrolling wheel on the left side of the mouse as well, although it doesn't leave much room for the Back/Forward navigation buttons, which I found a little too small for my manly thumbs. It's more precise than its predecessor, boasting a maximum sensor resolution of 4000dpi -- not for gaming, but for use with the latest high-res 4K and 5K displays -- and the internal battery should last for about 70 days between charges.

The MX Master 2S costs £89.99 ($99.99 in the US), which is a lot of money for a mouse. There's also a smaller model, called the MX Anywhere 2S, which is designed for laptops, priced at £79.99 ($79.99). However, Logitech's Options software managed to spring some interesting surprises when the company gave us a demo recently. You can pair the mouse with up to three computers when using Bluetooth or the USB adapter, but if your computers are on the same wi-fi network then a new option, called Flow, becomes available. This allows you to seamlessly switch between computers, and even to transfer data and files between them.

I use an iMac as my main office computer, but also have a Dell laptop that I use for testing Windows products. With Flow activated, I can move the mouse cursor to the edge of the iMac's screen and then the cursor simply hops across to the screen of the Dell laptop and takes control there. Even better is the ability to copy and paste text and graphics between documents on the two computers, and even transfer files using the right-click Copy/Paste commands. Logitech is a bit vague about which types of files you can transfer, but my initial tests allowed me to transfer a number of Word documents, PDF files and PNG screenshots with no trouble at all. It's a bit like Apple's AirDrop feature in OS X -- but better, because (a) it works, and (b) it also works across platforms.

Logitech's documentation isn't great, and left me searching for FAQs on its website in order to set it up with my two computers. Even so, the ability to quickly transfer files and other information between two or three computers will be a real time-saver for anyone who uses more than one system at work, and will help this premium-priced mouse to earn its keep.