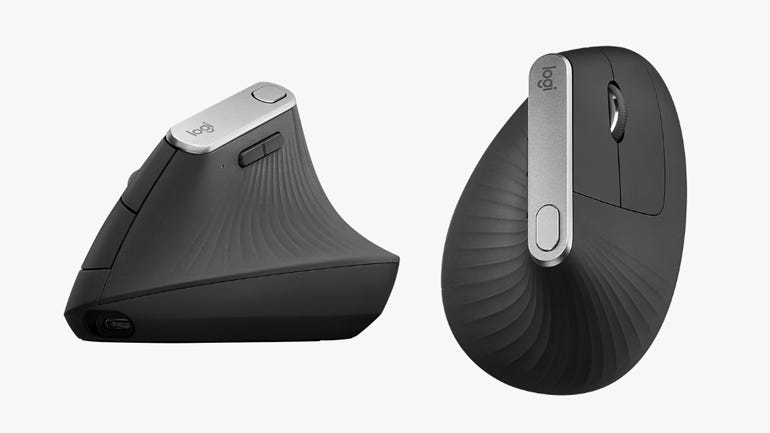 When it's possible to buy a mouse for less than £10, the idea of parting with £92.99 (inc. VAT, or $99.99) might cause anyone to think twice. But that's the price of the Logitech MX Vertical, an 'advanced ergonomic mouse' with an unusual design that's intended, says Logitech, to reduce muscle strain, decrease wrist pressure and even improve posture.

The MX Vertical certainly doesn't look like a traditional mouse. It looks more like an iron with a slight curve in it. Or one of those stress balls that's been compressed in a palm. And that's the whole point. It's designed so that the hand curves around it rather than rests on it, resulting in a more natural and relaxed grip.

The mouse can be tethered with a USB cable, or connected wirelessly via Bluetooth or the provided USB Logitech unifying receiver that will connect up to six devices at once. The supplied cable -- or any with a USB-C connector at the device end -- will be needed from time to time to charge the mouse, whose internal battery will keep it going for up to four months, and which can absorb three hours of life from a one-minute charge.

The MX Vertical will pair with up to three different devices, with a button on its underside to switch channels. It took seconds to pair with my laptop.

That wrap-around grip -- or as Logitech likes to refer to it, the 'handshake' grip -- puts first and second fingers on the two mouse buttons, which are extremely large and depress easily with the slightest amount of pressure. Between them is a scroll wheel. Meanwhile the thumb sits neatly on a pair of back and forwards buttons. There is a further button on the sloping top of the mouse. All of this is based around right-handed use. Lefties are out in the cold here -- unless Logitech decides to produce a version that's sculpted for left-handed use.

The grip puts the hand at a 57-degree angle, which reduces forearm strain, wrist pressure and muscular activity -- right up into the shoulder, says Logitech. I haven't been using the mouse for long enough to notice any real difference, but I must note that it feels remarkably comfortable. I've got pretty small hands, but I also let someone with larger hands have a go, and they were of the same opinion too.

This is all good, but both I and my large-handed colleague found that whenever we tried to thumb the back and forward buttons our forefingers wanted to press inwards to provide purchase for the thumb -- which caused a click. Over time I did 'unlearn' this behaviour, but it was irritating for a while.

That small button on the top of the mouse can be used to change the speed of cursor movement -- downloading the Logitech Options app makes this relatively easy and also allows other settings to be made, including changing the function of this button to act, for example, as a music pause/play toggle. Logitech Options also allows the forward and back thumb buttons to do all manner of things, from launching apps to zooming to copy-and-paste functions.

The 4,000dpi sensor makes for smooth movement and means it's not necessary to move the mouse around a great deal to propel the cursor. The MX Vertical doesn't require a great deal of desktop space.

The problem with reviewing this kind of equipment is that the value emerges with long-term use, as any ergonomic benefits gradually make their presence felt. What I can say for now is that the grip feels comfortable, my arm definitely felt relaxed while working, and I did get over the double-pressing issue when using the thumb buttons fairly quickly. I'm keen to try other vertical mice now, and I do hope Logitech decides to support lefties.

Mouse and stylus roundup: Microsoft Surface Precision Mouse, Azio Atom and Adonit Droid
Is it worth still using a mouse in a world of touchpads and touch screens? It's time to go back to the future.

Penclic Mouse B3, first take: Getting a grip on repetitive strain
This mouse with a pen-like attachment aims to deliver an ergonomic cursor-navigation experience.

Hands-on: Logitech MX Ergo wireless trackball mouse
I've been waiting a long time for a new trackball from Logitech. Finally, my patience has been rewarded with the release of the MX Ergo Wireless Trackball.

Why the Logitech MX Master 2S mouse is a perfect complement to Macs (TechRepublic)
Third-party Mac peripherals must deliver reliable function and compelling features in order to compete with devices from Apple and others. Erik Eckel says Logitech's MX Master 2S mouse excels at both.

Best Computer Accessories for 2018 (CNET)
Our editors hand-picked these products based on our tests and reviews.