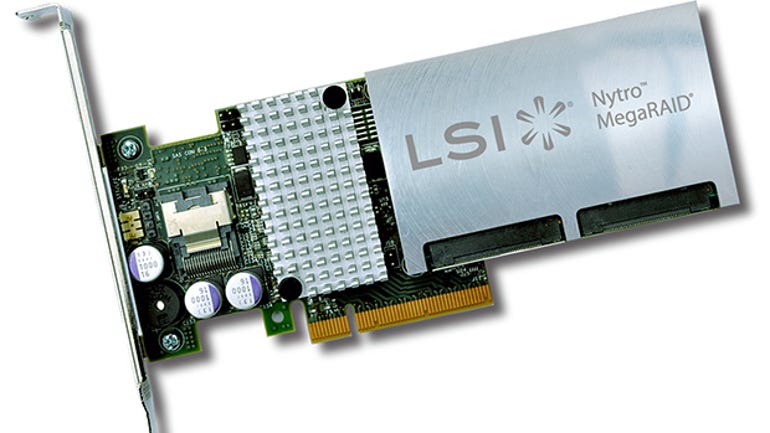 With all the talk of NAS, SANs and software-defined storage virtualization, it's easy to forget that many servers still rely on directly attached hard disks to fulfill their storage needs. Moreover, direct-attached storage (DAS) can be a real limiting factor when it comes to application performance — an issue the Nytro MegaRAID range from RAID specialist LSI is designed to address.

One way of boosting the performance of direct-attached storage is to get rid of slow magnetic disks and replace them with faster solid-state drives (SSDs). Despite the rapid commoditisation of flash and SSD technology, this approach can still be expensive — especially where large arrays are involved. The Nytro MegaRAID gets around this by using its on-board flash drives to temporarily cache the most frequently used — or 'hot' — data, transparently speeding up access to this information and reducing latency to boost application performance.

The LSI adapter can also help shorten RAID rebuild times when recovering an array after a disk failure. Moreover, with the latest firmware it's possible to combine caching with conventional volumes hosted by the on-board flash memory, which can be used to boot the host system as well as store indexes and other files that would benefit from being in fast flash storage.

It's all on the card

Designed to fit in an x8 lane PCIe slot, the Nytro is an enterprise-class HBA capable of transferring up to 6Gbps over each of those lanes with versions available to handle either internal or externally attached storage. A mini-SAS connector is used in each case which, with suitable cables, enables four disks to be cabled directly to the card, although that's not the limit. Indeed, using SAS expanders, it's possible to attach up to 128 disks to each Nytro MegaRAID and, according to LSI, have them all benefit from the caching it provides.

As an HBA, the Nytro is much like any other MegaRAID card, offering support for RAID levels 0,1,5 and 6 plus mirrored RAID 10, 50 and 60 arrays with the usual on-board RAID cache, optional battery backup and support for online RAID level migration. Up to 64 logical drives can be handled by the card with LUN support for up to 64TB and SafeStore encryption yet another option.

Where the Nytro differs, however, is in the availability of two on-board flash memory modules that can be used both for hot-data caching and as general high-speed storage. These live underneath a large heatsink with a choice of either 200GB or 800GB of enterprise MLC (eMLC) flash memory allocated across the two modules, managed by a SandForce controller (now also an LSI product). We reviewed the 800GB Nytro MegaRAID 8120-4i, which costs £3,255 (ex. VAT).

For extra redundancy the two flash modules can be configured as RAID 1 (a mirrored pair), although this does halve the available capacity. It's also worth noting that capacity upgrades are not possible, making it important to choose the right configuration upfront, for which LSI has a free utility called the Nytro Predictor Tool. Using this tool, customers can identify frequently accessed 'hot' data on their servers, predict the likely acceleration using the Nytro adapter and arrive at the best configuration.

Installation is very quick, especially if you're replacing an existing MegaRAID HBA, with the card supplied ready-configured to provide basic caching as soon as the host is booted. Also, there's no need to learn new skills as management is carried out via the same CLI and graphical tools employed by other MegaRAID adapters.

The only gotcha waiting to trip the unwary is the high heat output of the Nytro MegaRAID card, calling for plenty of cooling power in the host server. An airflow of at least 300 linear feet per minute (LFPM) is required, with 500 LFPM recommended for optimal operation.

For our tests we installed our 800GB Nytro MegaRAID 8120-4 in a host server and cabled it to four 15,000rpm SAS disks configured as a RAID 5 array. We then ran the Iometer storage benchmark to test throughput with the on-board cache first disabled and then turned on.

With the Nytro cache disabled and with a predominantly random write workload, Iometer peaked at just over 275 I/O operations per second (IOPS) writing data to our array. Average response time was just under 28 milliseconds. Enabling the cache and rerunning the test resulted in a gradual improvement as the cache store was populated, Iometer eventually recording a much more impressive 11,682 IOPS with an average response time of 0.57 milliseconds (graph, left).

Switching to a predominantly read workload resulted in an equally impressive boost in performance and similar drop in latency (graph, right). We were also impressed by just how easy it all was — certainly a lot less hassle than switching from magnetic to SSD storage with no reformatting or resizing required. And although we tested using a Windows server, the adapter comes with drivers for use with leading Linux platforms such as Red Hat Enterprise Linux as well as VMware hypervisors.

We also checked out the new external volume option, using this to boot the server from the Nytro adapter — potentially freeing up additional drive bays for application and data storage.

Finally, while we were looking at the Nytro MegaRAID, LSI announced the imminent release of an even more scalable implementation with more SAS ports and double the onboard flash. Aimed at companies looking to maximise their investment in high-end cloud and multi-tenanted web server platforms, the new implementation is due for release in April, adding yet another string to the Nytro MegaRAID bow.