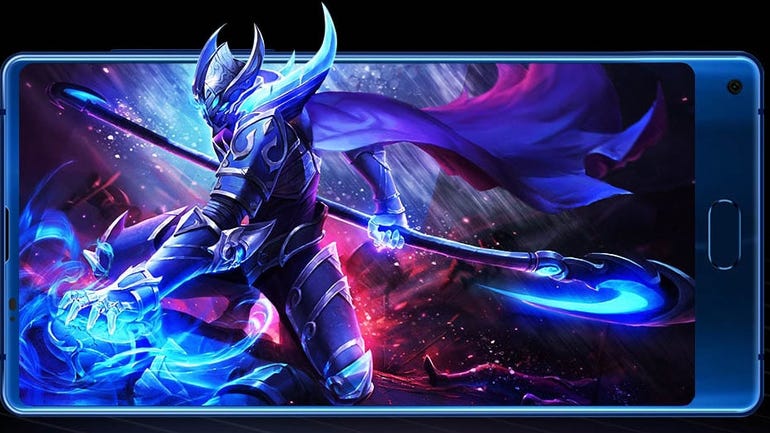 The Android 7.0 Alpha X phablet has a CNC-machined slim metal frame, a bezel-less display, with an 89.6 percent screen-to-body ratio, larger than the Maze Alpha. It has a 6.0 inch capacitive display with a 2160 x 1080 pixel resolution LG screen, 18:9 aspect ratio, and 508 PPI.

There is some space for an LED notification light, squeezed into the edge of the phone. The LED is red when the device is charging, green when fully charged, and blue when there is an app notification.

The back of the phone is high gloss Corning Gorilla Glass 5 -- but t has some sort of coating on that reduces fingerprint marks -- believe me, I tried to get my fingerprints to mark it.

Maze could protect the phone by adding a soft cover in the package. I felt that dropping the phone would smash the corner and crack the rear glass.

There is a tempered glass screen protector. However, other phones, such as the Meizu Pro 7, Elephone S8, Ulefone T1, and the Doogee Mix already include protective cases.

The rear cameras are 16/13 megapixel, with a Sony IMX258 sensor and there is an 8-megapixel front camera with Sony IMX 219 sensor. Like the Maze Alpha you need to turn the phone upside down to get the best selfie, as the camera is at the bottom of the screen.

The phone has two SIMs slots -- one can be used for an expansion SD card up to 256GB. There is an audio jack and a USB C port.

I prefer large-screen phablets and found that, for under $300, the Alpha X adequately performed all the tasks I needed it to for a few days on the road. With the extra screen real-estate, I did not need to start up my PC at all.

The operating system is the same as the Maze Alpha -- again, there are no OEM features to report. This standard Android Nougat build gives the phone a familiar feel. The fingerprint recognition works well and the soft navigation buttons give even more screen real-estate.

Like the Maze Alpha, the Alpha X upgrade is a nice looking workhorse of a phablet with a lovely display and nice camera. It performs well and looks slick. It is certainly worth its price tag.

Maze Alpha hands-on: A bezel-less workhorse with a 6-inch screen

The Maze Alpha is an affordable, bezel-less 6GB phone with a large 6-inch screen.

The Doogee BL7000 is an affordable, solid smartphone with a great camera and an extra long battery life.