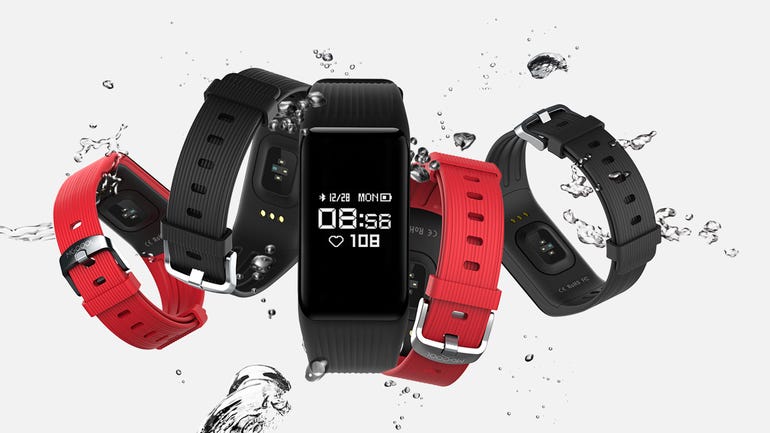 I liked the look of the Mgcool Band 3 as soon as I took it out of the box. Currently offered at under $15, I was impressed with the high build quality of the hardware for such a cheap fitness device.

The face has curved bezels and no buttons at all -- unlike the Microsoft Band 2 and Samsung GearFit 2. It looks sleek, curved, and stylish.

The Band 3 has a removable silicone strap and comes in a red or black option. The washable strap easily removes and holds the tracker snug when it is worn on the wrist.

Activating the functions is as simple as touching the lower part of the screen -- or configuring the device to activate when you raise your arm.

A long press on the screen activates configuration mode which enables you to change the time screen to one of three options; full, simple, and analogue clock displays.

The device will vibrate if you receive a message when the Band 3 is connected to your phone by Bluetooth.

It will receive messages from Facebook, Twitter, WhatsApp, WeChat, QQ or Line and SMS messages. I only received text messages on the device, which buzzed and displayed the SMS immediately on screen.

I did not receive any other messages -- but this could have been due to settings on my Android device. If you have configured the band to buzz after a period of inactivity, it will buzz and display a chair icon. It will also buzz a few times just before the battery runs out on the device.

Battery life is excellent. During the three weeks I wore the device, I only had to charge the Band 3 twice.

I was frustrated that the Band 3 only had one level of display. I could not click, or press to get any second level screen, nor scroll to get historical details on the tracker. The device shows a point in time only -- the rest can be gleaned from the app.

In bright light the white display was difficult to see -- and in the dark, the light was incredibly bright -- bright enough to wake you if you inadvertently touch the device whilst sleeping.

I also was annoyed by the fact that I kept inadvertently leaning on the screen -- sending it into clock display configuration mode every time I crossed my arms or leaned forward on the desk. Eventually I placed the device on my other arm to lessen the issue.

The user guide is reasonably well written -- but not very detailed. For example the guide tells you to 'click the OLED touch button' -- but the image does not indicate where this is (it is at the bottom of the screen)

To pair the tracker with the app, you need to download the WearFit 2.0 app from the app store or Play store and connect it to your tracker using Bluetooth.

The device did not appear in the Bluetooth pairing list. It was a while until I realized that I had to connect the app to the 'K1' device -- not WearFit 2.0. This must be carried out on the WearFit 2.0 app only.

The app looks like it has some nice features -- but the English explanations are dreadful. Mgcool must hire a native English speaker to look at the wording of the app screens and correct the text and grammar to make it readable.

English spelling, grammar, and punctuation is awful on the app. For example, one of the screens in the sleep section details sober times alongside light, and deep sleep periods.

Health tips advice begins "For age, physical difference, each people lowest sleep need (MSR) is different." (I added spaces between each of the words).

Health tips advise "dont drinl (yes, that is the actual spelling) strong tea, especially during sleep" The app is peppered with confusing text, and meaningless sentences.

When the app initiates, there is a 'Measure' hyperlink in the top right hand corner of the UI. This disappears from the UI after the app has connected with the hardware.

If you can get to the link quickly enough, there is an underlying screen which has icons to measure both blood pressure and blood oxygen -- really useful features. However -- neither of these icons produce any measurements.

All in all, I did find the tracker was useful for monitoring my sleep patterns, my heart rate, and for tracking my steps.

Distance traveled as shown on the device and the app did not match my tracker on my phone, and I found the measurement of my fatigue was unnecessary -- I know when I am tired. Do not expect too much from the app until several of the features have been ironed out.

However, if you want a nice looking ultra basic heart and step monitor that costs much less than $50, and looks good on your wrist -- then try the Mgcool Band 3. You will not have wasted your money.