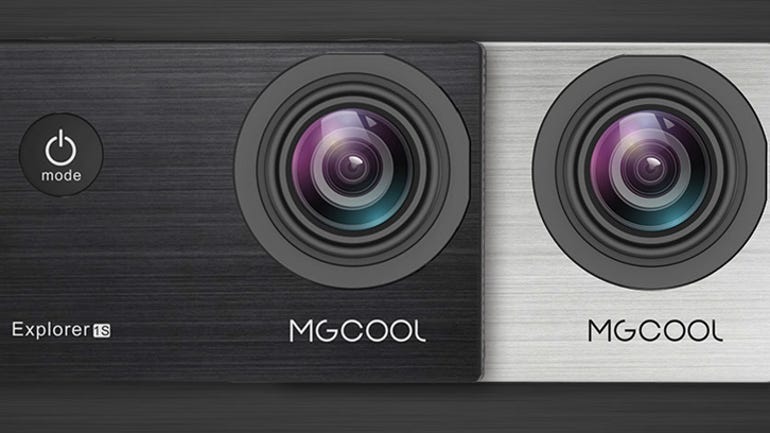 The Mgcool Explorer 1S action camera has a lot to offer from a low-cost camera. It is a tiny action camera with a 2-inch LTPS screen, and a resolution of 320 x 240 pixels.

Inside the device there is a Novatek NT96660 CPU, a Sony IMX179 sensor, and Wi-Fi with a range of up to 10m (33 feet). You can connect it to an app on your smartphone and remotely control the camera.

This enables you to use it as a remote monitoring device to record video of hidden objects and obstacles.

The camera itself delivers multiple resolutions: 4k/24fps, 2k/30fps, 1080p/60fps, or 30fps. Photo image resolution is 16 megapixel. It also has two 1,050mAh batteries, which will record about 100 minutes of video per battery.

The camera will also record MP4 format videos when it is charging. This fish-eye lens delivers an ultra-wide angle view that's adjustable from 70 to 170 degrees.

It also has an IP68-rated waterproof housing that the manufacturers claim is waterproof to 100 feet. The side of the camera housing has an HDMI output, a micro USB port, and a TF card slot. There are also zoom buttons.

You will need to fit a TF card. The camera will not function without it. You can insert a TF card with up to 64GB in storage.

The camera will shoot photos, saved as JPEG, with either a single shot, panoramic, bursts, drama shots, or you can use the self timer. You can also set loops of up to 5 minutes.

Other video features include slow motion, and time-lapse shooting. Usefully, the camera also has a motion detection mode. It will start recording when it detects moving objects.

I tried the camera in several modes, video, burst image and slow-motion. I also tried the motion detection feature.

I found that on dull days, the light quality of the video was not too good. Images were a little grainy and photo quality was not spectacular. In bright light conditions, however, the output was excellent, crisp, and clear.

The sound was good with the camera out of its casing, but muffled in the case. The motion detector did not pick up small animals such as birds or bats in low light, but it started recording when a human walked into its field of view.

I did not go scuba diving during the test, so I could not take it down to 100 feet to test its underwater capabilities.

Whilst it does not have all the features in a GoPro Hero camera, the Explorer-Pro is a fraction of the cost and a very acceptable alternative to the more expensive camera.

I found that the Mgcool Explorer 1S did most of the things I wanted it do during the test, and it only came up short in low-light environments. At a cost of under $70, for its features, this little gem is an absolute bargain.

Hands on with the Destek V4 VR Headset: Great quality for an affordable price

The Destek V4 VR headset brings you a superb VR experience with good quality hardware at a really low price.

To keep all of your devices charged up to the max when you are out on the road, try these multi-port car chargers.

You can now build a voice product that integrates Amazon Alexa Voice Service and Google Assistant on your Raspberry Pi.