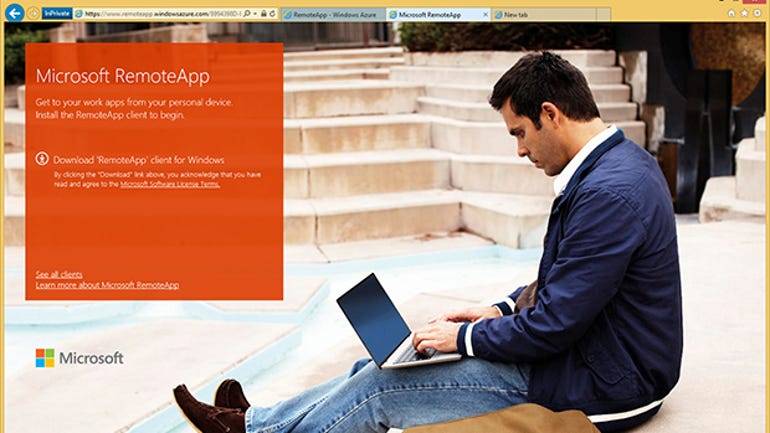 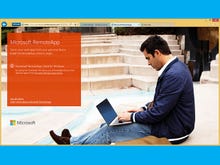 ZDNet had some hands-on time with Azure RemoteApp at a recent Azure press event in Redmond, setting up a server image and publishing a selection of Office apps.

Microsoft has never made it easy to offer desktop-as-a-service. The licensing requirements alone are complex and hard to understand, and then there's the process of setting up and deploying remote desktop servers running a desktop experience on Windows Server. Microsoft's preferred solution has been its Windows Server-based session virtualisation technologies, which deliver apps rather than desktops. But that, too, isn't easy to run in the cloud. All that's about to change with the launch of Azure RemoteApp, a set of tools for managing and deploying session virtualisation servers on Azure's infrastructure-as-a-service (IaaS) platform.

Azure RemoteApp simplifies the process of publishing and sharing apps, eliminating the need for complex infrastructure or even more complex software configuration. All that's required is an appropriate server image, preloaded with the apps you want to share. You then add the image to a Azure RemoteApp instance, and specify the users who will get access to its apps. Users simply need an updated version of Microsoft's Remote Desktop tool and either an Azure Active Directory or a Microsoft Account. Apps are delivered using Microsoft's RDP and RemoteFX protocols.

The service that launches this week is a free beta, with significant limitations. There's only one server image available (a Windows Server 2012 R2 image with Microsoft Office), so you won't be able to add your own images to the collection and can't use Azure to host older Windows operating systems. You will be able to add your own applications to the image soon after launch, though. Users will get 50GB of storage for data, but you can only have 20 users per tenant.

Microsoft has told us that it's launching an early beta in order to get as much feedback as possible, so the RemoteApp team can see how users work with the service and what they want from it. This feedback will allow them to iterate quickly.

We had some hands-on time with Azure RemoteApp at a recent Azure press event in Redmond, setting up a server image and publishing a selection of Office apps.

You'll need an Azure subscription to get started with the RemoteApp beta, which is free for a limited number of trial users. Once a server has been deployed and configured, users will log in through Azure AD, and then be presented with a download link for the Remote Desktop client. Once that's downloaded they can see the published apps and launch them on their desktop or mobile devices. Published apps are visible through the client, or if you're using a Windows 8 machine, in the Windows Start screen.

Setting up a RemoteApp instance is straightforward. Log into the Azure Portal, and choose RemoteApp. You'll be presented with a list of your existing servers, and given the option of creating new ones. If you're creating a new server, you can choose to create a standalone server or one with a VPN connection back to your datacentre.

Next you'll need to give your server a name, choose the appropriate image from an Azure Gallery (initially you'll be using Windows Server 2012 R2 with Office 2013 Professional Plus), and the region where you want the server to be hosted. It's a good idea to keep servers as close as possible to your users, so you can set up several servers in several different regions. Once you've made all your choices, Azure will set up and deploy your server. This shouldn't take too long — we were ready to go in under ten minutes.

Once your server is ready you'll be able to configure the available apps, and set up your users. Adding new users is as simple as typing in their email address, which needs to be associated with a Azure Active Directory or a Microsoft Account. You can then select the programs that will be delivered to that user from a list of available apps on your image.

Your users can now log into the site. We used a Windows 8.1 desktop PC, logging on via the Azure Remote App user portal. This downloaded a click-to-run desktop client, although you have the option of downloading the appropriate client for other platforms, including Android, iOS and OS X. Once you've downloaded and installed a client, you login with the appropriate account. You'll be shown an invitation from the server administrator and, once this is accepted, a list of the available apps. You can have access to apps from more than one invitation.

The end user experience is just like using a local app. There's some latency, so be careful to publish your servers in an Azure zone near your users. As we were using a pre-beta internal deployment we couldn't test just how scalable the service is, but Microsoft representatives indicated that it took advantage of the existing Azure IaaS infrastructure and services.

We only had access to Windows 8 test clients, but Microsoft demonstrated an updated version of its iOS Remote Desktop client. RemoteApps are accessed from a drop-down menu at the top of the iOS app's screen, letting you quickly switch apps. There's no need for a full Windows desktop here: what you're getting is the standard Windows app window scaled appropriately for your device. Azure RemoteApp will require new versions of the iOS and Android Remote Desktop clients, and a Windows Phone 8.1 client will be available later this summer. Pricing and full specifications of the final service have yet to be announced.

Our test system was a pure-cloud deployment, but Microsoft is giving IT departments the option of using a hybrid deployment model, where published apps get access to services and data running in an on-premises datacentre over a VPN connection to Azure. You'll be able to use this to deliver line-of-business and custom apps as RemoteApps, as well as keeping key data in your servers — an approach that will allow you to stay compliant with regulations.

Azure RemoteApp is an interesting approach to providing desktop-as-a-service. Instead of delivering a complete desktop experience, it just delivers the apps you need, keeping data in the Azure cloud. You can switch from machine to machine without losing your data, and even from operating system to operating system. Microsoft is clearly aware that users will want to use the devices they own, and is delivering a service that lets IT departments take advantage of that, while still keeping data and apps in a managed cloud environment.