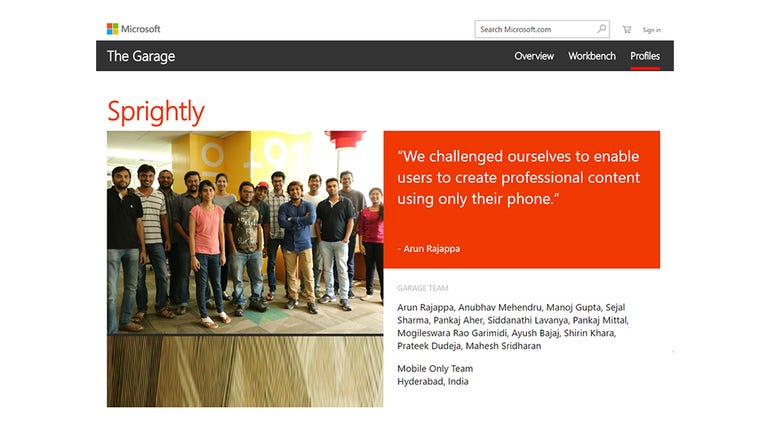 These days, businesses need more than paper flyers or even websites. They need engaging content that they can share on social media -- something more than a web page and less than an app, like a mini catalogue. Microsoft's Sprightly calls these 'collages'. Enough businesses are looking for these tools that Adobe has come out with its Spark Post app, and there are startups like Canva, Over and Word Swag with apps to make it easy to design flyers, coupons and catalogues in an app rather than going to a designer.

Sprightly comes from the Microsoft Garage, which means it's an experimental, prototype app that might or might not turn into a full product, or even a feature on Office 365. The team in Hyderabad that built it was thinking about small businesses owned by someone who only has a smartphone, not a PC -- so it's mobile only, with no web version (unlike Spark and Canva, and even the Office 365 Sway tool, which also does automatic page layout).

The original Android app was followed by an iOS version (sized for the iPhone, but you can run it on iPad too), and the Sprightly team has been putting out regular betas for both systems with new features, which have been rolled up into recent updates for Android and iOS. (The product team even has a Google+ page for updates and announcements.)

The latest version adds to the list of what you can design with Sprightly. You can now create video magazines as well as flyers, catalogues, price lists, e-cards, and discount coupons, although they're more of an animated image sequence than an actual video. You pick up to ten images (from your photo collection on the phone, or you can snap a new image, and the app counts down how many you've selected so far). Then you give them each a short title and caption, which the app suggests can be a product code or discount details, and fill in the title and contact slide at the beginning and end. From that, Sprightly creates an animation that pages through the images like a slideshow.

You can pick from two templates for the video on Android -- one looks like a stack of polaroid photos, while the other zooms into a circle from each photo in turn (on iOS you get another template that slides and flips between the images, two per page). You can also add a watermark -- your company name or URL, for example -- or pick the background music (or turn it off). And when you place a photo, you can pinch to zoom, rotate, tweak brightness and contrast, or apply a handful of filters. What you can't do is make your own template or choose the font (which makes sense for an app that does the design for you). More annoyingly, we couldn't find a way to change the order of the images, so if you don't add them to the template in the order you want, you have to remove and re-add them.

That's easier than it would otherwise be, because photos you use are added to Sprightly's collection, so you can easily find them. Photos retain any title you've used in a template to make them easier to find in list view than the usual cryptic image file names, and you can see how many times you've used an image. Similarly, once you've filled in your contact details on one design, they'll automatically appear on any other designs where the template has contact fields (not all do). Microsoft has also fixed the problem in earlier versions where there were only enough characters for a US phone number, but not a UK one. But even with all those things to make deleting and replacing content easier, we'd still like to be able to change the order in which images are placed in the template.

The other design types -- catalogues, price lists, e-cards, flyers and coupons -- have far more templates (and new templates are added regularly), but you can't tweak them either. You get a warning if you put in too much text -- the template won't stop you having the last word, but it won't let you switch a heading to be centred instead of left justified if you think that would look better, and you can't change the colour of the background. Sprightly doesn't have Sway's clever options for pulling a palette out of your image colours, or letting you mark what part of the image you care about (although zooming and dragging the photo to fit the image space is easy, and if the space for the image is a circle, the outline you drag it to fill is a circle too).

The coupon and card templates only let you use one image, while the flyers, catalogues and price lists let you choose up to four, ten or 12 images, with the pictures automatically laid out on the page to fit. If you choose three images for a template that can fit four, the images will be larger and spaced out more. Flyers can only be a single page, but the multi-page price lists and catalogues arrange photos over multiple pages. Price lists always put multiple items on a page; some catalogue templates put one item per page, while others mix pages with one image and pages with multiple pictures. Again, you can't choose easily what goes where, but it's very quick to flip through the templates and see what suits your pictures, and to fill in the text, knowing it will all look good together.

Once your design is finished you can share it. So far, the options are just uploading to WhatsApp or Facebook, or emailing as a PDF on Android, plus whatever sharing tools your phone has itself. For iOS, you get your current sharing services: if you make a flyer, for example, you can save it as an image or print it, as well as putting it on iCloud or sharing via your social media apps; video magazines can be saved as a video file locally as well as shared.

If you need to create a catalogue of products or you want to put a coupon on social media and have it look professionally designed, but you only have your phone to work with, Sprightly is great for that, and it's steadily getting more features. But if you itch to pick your own colours and fonts, or you need something that integrates into a tracking system so you know who you've sent flyers and discounts to, or you just want to get images that are correctly sized for Instagram and other social networks where the image size and scale really matters, you might want to look at Adobe Spark -- at least until we know whether Sprightly will stay as an experiment or grow up into a real product. Either way, it's easy enough to use that you can have a good-looking business communication in five minutes -- and sometimes that's exactly what you need.