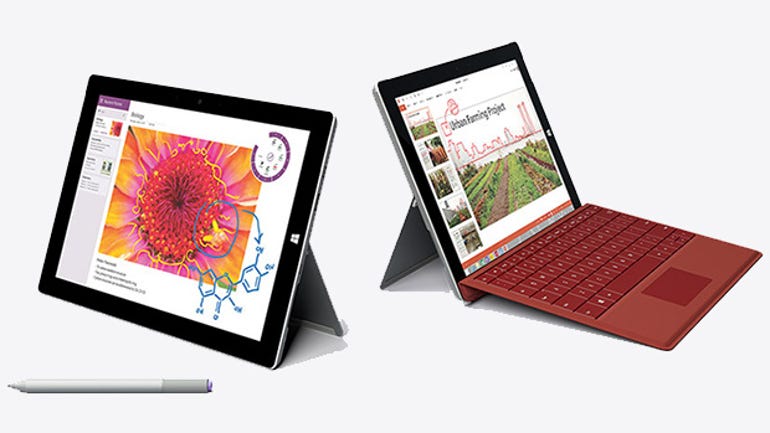 Microsoft markets the Surface 3 -- which is aimed at students, parents, and mobile professionals (at whom a forthcoming LTE mobile broadband option is targeted) -- as a tablet that 'works like a laptop when you need it', whereas the Surface Pro 3 is 'the tablet that can replace your laptop'. As ever with Surface tablets, the headline entry-level price of £419 (inc. VAT) does not match the marketing message: to 'work like a laptop', you'll need to spend another £109.99 (inc. VAT) on an optional Type Cover keyboard. Here are the key pricing details for the Surface 3 and its Pro 3 big brother:

Speaking of travel, mobile professionals will be pleased to note that charging is now via a Micro-USB port rather than the proprietary, and rather fiddly, magnetic connector of old (although, to be fair, the Surface Pro 3's implementation was an improvement). The supplied cable's Micro-USB connector incorporates an LED to show that it's plugged in, which is fine, although it would be better if it dimmed or turned off when the tablet is 100 percent charged as the light can be somewhat distracting, especially in low light. The 13W AC adapter has a single USB port.

Each iteration of the Surface has seen Microsoft tinker with the design of the kickstand, culminating in the very effective multi-position version in the Surface Pro 3. Presumably to save costs, the Surface 3 doesn't go that far, settling on a three-position unit designed for movie-watching, typing with the add-on keyboard and drawing or typing on-screen. This is a good compromise.

We noted that the Surface 3 is the thinnest Microsoft tablet to date, and that's largely down to its use of Intel's latest low-power Atom x7-Z8700 processor. This quad-core CPU not only delivers decent performance (see below), but also has an SDP (Scenario Design Power) of just 2W. That allows Microsoft to dispense with a fan, and the fan intake/vent, that featured on the Core i3/5/7-powered Surface Pro 3. According to Microsoft, the device could have been made even thinner than 87mm, but another design requirement -- the need to retain a full-size USB 3.0 port -- ruled that out.

The Surface 3's 10.8-inch ClearType touchscreen has a resolution of 1,920 by 1,280 pixels, giving a pixel density of 207ppi, which is comparable to the 12-inch Surface Pro 3's 216ppi (from 2,160 by 1,440 pixels). Like its bigger brother, the Surface 3 has a 3:2 aspect ratio and delivers excellent image quality and viewing angles, the only drawback (for some) being a glossy surface that can make for distracting reflections in brightly-lit offices or outdoors.

Many people like to use an external monitor for an enhanced work or entertainment experience, and you can do this either via the Surface 3's Mini-DisplayPort or by taking advantage of its Miracast support and linking wirelessly to a similarly compliant monitor (you may need a dongle such as Microsoft's Wireless Display Adapter for this). Be aware, though, that the Surface 3 only supports one external monitor in addition to the internal screen, with resolutions up to 3,840 by 2,160 at a 30Hz refresh rate or 2,560 by 1,600 at 60Hz. If you need more than one external monitor, you should be looking at the Surface Pro 3 (see Microsoft's support website for more details).

As noted earlier, if you want to use the Surface 3 in laptop mode, you'll have to fork out another £109.99 (inc. VAT) for the snap-on Type Cover keyboard. This has the same double hinge mechanism as seen in the Surface Pro 3, allowing the keyboard to lie flat or sit up at a more convenient typing angle while also occupying a slightly smaller footprint. We found the Surface 3 Type Cover, which is backlit, to be a good typing platform, with a decent action on the well-sized contiguous keys. The trackpad, with integrated left and right buttons, also performs well.

One irritating Windows 8.1 behaviour when the Surface 3 is in laptop mode is the way, by default, the on-screen keyboard keeps popping up, obscuring half the screen, every time you touch the screen to scroll through a document or reposition the cursor, for example. We got rid of this by running 'services.msc' and disabling the Touch Keyboard and Handwriting Panel Service, but it shouldn't be beyond the wit of Windows to detect when the Type Cover is attached and ask whether you'd like to temporarily disable the on-screen keyboard.

If you've used the Surface Pro 3, you'll know the quality of the N-trig-based stylus (at least for general-purpose pen-input tasks, as some artists have reported a jitter issue when drawing slow diagonal lines). Unfortunately the Surface Pen is a £44.99 (inc. VAT) option for the Surface 3, whereas it was included when you bought the Surface Pro 3. Otherwise, the functionality is the same, including a natural-feeling tip, 256 pressure levels, palm-rejection, single-click the top button to wake the tablet and fire up OneNote, double-click to capture a screenshot, plus right-click and eraser buttons.

If you're planning to do more serious work on the Surface 3, at home or at work, you'll need to consider another option -- the Surface 3 Docking Station. For £164.99 (inc. VAT) you'll get a 311mm by 140mm by 95mm, 880g unit with two USB 3.0 ports, two USB 2.0 ports, a Gigabit Ethernet (RJ-45) port, Mini-DisplayPort video-out, an audio in/out combo jack, a power input and a place to stow the optional Surface Pen (absent from the tablet itself).

The Surface 3 is the first tablet to be powered by Intel's new 14nm quad-core Atom x7-Z8700 processor, which runs at 1.6GHz (and up to 2.4GHz with Turbo Boost) and includes integrated Intel HD Graphics. The two currently available models come with either 2GB of RAM and 64GB of Samsung eMMC storage or 4GB and 128GB; our review unit had the higher configuration. Additional storage is available via a Micro-SD card slot located under the kickstand, on the right-hand side (in landscape orientation) or via OneDrive cloud storage.

The OS is Windows 8.1 (with a free upgrade to Windows 10 later this year) and the software bundle includes a one-year subscription to Office 365 Personal (worth £59.99 a year, or £5.99 a month). This gives you access to full locally installed versions of Word, Excel, PowerPoint, OneNote, Outlook, Publisher and Access. The Office 365 Personal subscription also boosts your OneDrive storage complement from the default 15GB to 1TB.

Out of the box, your network connection will be wireless, courtesy of a Marvell 802.11a/b/g/n/ac wi-fi module, which also supports Bluetooth 4.0 LE. If you need a wired Ethernet connection, you'll either have to buy a USB-to-Ethernet adapter (Microsoft's Surface Ethernet Adapter costs £31.49 inc. VAT) or go for the full £164.99 (inc. VAT) Surface 3 Docking Station. Mobile professionals will be interested to note that LTE mobile broadband will be available as an option in due course, although no firm release date has been announced yet. The mobile broadband module will also add GPS (plus A-GPS and GLONASS) support.

We've already noted the various ports and slots, all of which are on the right-hand side. Starting at the top, there's a Mini-DisplayPort, a full-size USB 3.0 port, a Micro-USB charging port, a Micro-SD card slot (tucked beneath the kickstand) and a headset jack. The top edge houses a volume rocker and the power button, while the bottom edge carries the magnetic connector for the Type Cover.

Intel's Atom range of low-power processors has generally been seen as good for battery life but somewhat lacking in performance. The new 14nm quad-core x5/x7 range (codenamed Cherry Trail) is expected to redress that balance, and the Surface 3 is the first product to showcase it in the shape of the x7-Z8700.

The Atom x7's performance is certainly improved, but, as the GeekBench 3 test shows, it cannot compare to the Core i5 and Core i7 processors in the Surface Pro 3:

Microsoft's Windows Experience Index (WEI) assesses performance across the range of subsystems, from which it can be seen that the biggest Surface 3/Surface Pro 3 discrepancies are in disk and graphics performance:

In use, so long as you're doing mainstream tasks like web browsing, email, video watching, and light document creation/editing, the Surface 3's performance is fine. Just don't expect it to shine at power-user workloads that require serious disk and graphics horsepower.

The good news with the Surface 3 is that battery life is an improvement on the Surface Pro 3. Even though the Surface 3 has a 28Wh battery compared to the 42Wh unit in the Pro 3, we estimated a 10.6 percent improvement in battery life for the former, thanks to its low-power Atom CPU and smaller 10.8-inch screen. For both tablets, battery life estimates were generated by measuring average power consumption under a variety of screen brightness and workload conditions, dividing the resulting wattages into the battery capacity (Wh/W=h). Using this method, we got battery life estimates ranging between 12 hours (idling/low screen brightness) and 3 hours (demanding load/max screen brightness). What you get in practice will fall somewhere between these points, depending on your usage pattern. Microsoft claims 'up to' 10 hours of video playback.

If you liked the cut of the Surface Pro 3's jib but balked at the price (which starts at £639 inc. VAT and can reach a dizzy £1,824 with a top-end tablet plus Type Cover and Docking Station), then the Surface 3 (£419 to £819 with top-end tablet, Type Cover, Surface Pen and Docking Station) will be a tempting alternative. You'll compromise on performance, but this shouldn't be a problem unless your expectations are unrealistic, and the reward is better battery life.

It goes without saying that you'll need to be comfortable in the Windows/Office ecosystem, happy with the typing experience on the Type Cover and get along with touchscreens. You don't get the stylus as standard, but if you do shell out the extra £44.99, you'll find it extremely capable -- especially if you're a OneNote user.

Overall, the Surface 3 can indeed 'work like a laptop when you need it' -- so long as you stick to mainstream workloads and remember that a keyboard is an extra-cost option.