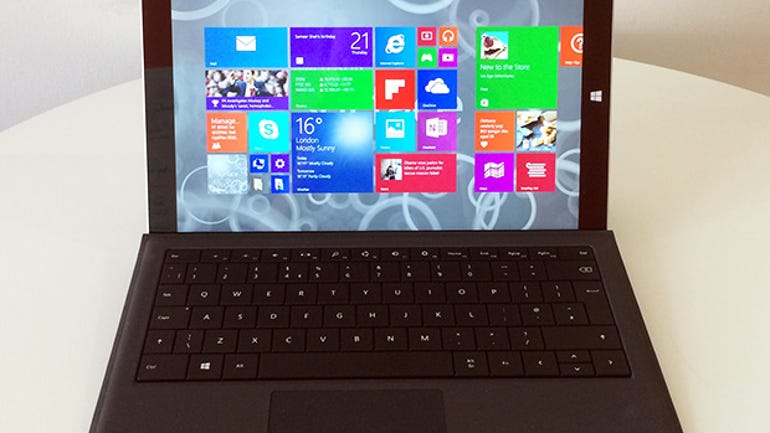 Since its debut in 2012, Microsoft's Surface family of Windows tablet/laptop hybrids has generated plenty of coverage and opinion, but only moderate sales . Reviews of the x86-based Surface Pro devices running Windows 8.x have generally commented favourably on their design, build quality and performance, with criticism focusing on some ergonomic shortcomings, battery life (particularly in the first-generation Surface Pro ) and premium pricing (especially when accessories like add-on keyboards and docking stations are factored in).

With the third-generation Surface Pro 3, announced in May and available in the UK on 28 August, Microsoft has delivered a larger (but slimmer) 12-inch tablet with, among other improvements, a multi-angle kickstand, a better Type Cover keyboard and a new digitiser/stylus combo with nifty OneNote integration. It's still a premium-priced device though — especially in UK and elsewhere outside the US, where there's a significant markup .

This time around, Microsoft is marketing the Surface Pro 3 as "the tablet that can replace your laptop" (which implies that you need the optional Type Cover) and putting out advertisements that explicitly compare it to an actual laptop — Apple's (13-inch) MacBook Air.

Such exercises are interesting, and good debating fodder. However, when it comes down to an actual purchase decision, there are other factors to consider. For example, are you committed to, or biased towards, a particular OS platform — either through personal choice or because of the IT environment at your workplace? Do you value the flexibility of a hybrid touchscreen tablet/laptop, or are you happier with a more traditional touchpad-and-keyboard-driven clamshell device? Speeds, feeds and prices are all important, of course, but it's your preferred OS platform and style of computing that's likely to tip the balance one way or another.

As far as image quality is concerned, the Surface Pro 3's IPS screen, like its predecessors', is excellent: it displays bright, vibrant colours and sharp text with good viewing angles. The screen surface is glossy, so outdoor viewing may be somewhat problematical.

Another marked improvement in the Surface Pro 3's design is its multi-angle kickstand, which finally reaches the destination towards which the first- and second-generation models were stumbling with their respective (and restrictive) single- and dual-position kickstands. The new hinge is sturdy, opens from 22 to 150 degrees and makes it much more comfortable to use the Surface Pro 3 in laptop mode — both on a flat surface and on your lap.

Talking of laptop mode, that obviously requires a keyboard — which unfortunately remains a £109.99 (inc. VAT) option, despite Microsoft's MacBook Air-focused marketing campaign. There's only one add-on keyboard for the Surface Pro 3 — the Type Cover with backlit notebook-style keys. The Surface Pro 3's magnetic docking port will accept older Touch Covers with their membrane-style keys, but of course these (and previous-generation Type Covers) are designed for a 10.6-inch screen rather than a 12-inch display.

As well as an improved clickable multitouch touchpad with two-finger scrolling and pinch-zoom, the new Surface Pro 3 Type Cover has a double hinge and an extra magnetic strip that supports a more comfortable raised typing position (see image above). This does have the drawback of ruling out Windows 8.1 gestures involving the lower bezel, so you'll have to swipe down from the top bezel instead. Another consequence of the new keyboard attachment mechanism is that the Windows touch-button has had to move from the bottom bezel to the right-hand bezel, where it's more easily activated accidentally.

Like previous models, the Surface Pro 3 feels very solidly built, its smart light-grey magnesium alloy chassis incorporating a fan grille running along the top and halfway down the sides. Teardown analyses confirm the tablet's sturdy construction, but also criticise it for being hard to get into, using too many different-sized screws and having a glued-down battery. Repair experts iFixit gave the Surface Pro 3 a 'dismal' one out 10 for repairability. Our advice is simple: don't try to open up your Surface Pro 3.

As far as ports and connectors are concerned, there's a single USB 3.0 port on the right side, beneath a Mini-DisplayPort. Also on the right side is a (thankfully) updated magnetic power input connector — the previous design was annoyingly fiddly to engage. The power button is on the top, at the left-hand end, while the left side has the volume rocker. There are stereo speaker slits in the left and right bezels, about a centimetre from the top, while the top bezel houses a five-megapixel camera, an ambient light sensor and a microphone — a trio that's repeated at the back. The MicroSD card slot is also at the back, beneath the kickstand on the right side. Many Surface Pro users, and photographers in particular, would appreciate a full-size SD card slot.

The Surface Pen is another point of difference between the second- and third-generation Surface Pros. The Surface Pro 2 had a Wacom EMR digitiser and a passive stylus that recognised 1,204 pressure levels, while the latest model replaces this with a thinner N-trig digitiser and an active Bluetooth pen (requiring an AAAA battery and two coin cells) that recognises 256 pressure levels. The two-button Surface Pen looks and feels like an actual pen, and we found it satisfying to use both for note-taking in OneNote and painting (albeit ineptly) in the bundled Fresh Paint app.

Talking of OneNote, there's some clever integration with the Surface Pen: a click of the pen's top button wakes the tablet from sleep and fires up OneNote ready for note-taking; and if you're browsing the web, for example, and want to take a clipping, a double-click of the button takes a screenshot and automatically loads it into a OneNote page for annotation. Note that if you want to convert handwritten notes to text, you'll have to download the (free) desktop application from onenote.com— the bundled Windows Store OneNote app doesn't support this.

We criticised previous Surface Pros for having nowhere to stow the stylus when the magnetic power input is in use, and Microsoft has done something about it — up to a point — with the Surface Pro 3. When you buy the optional Type Cover, you get a small packet containing a colour-matched Pen Loop, which is a fabric loop with an adhesive attachment designed to fix to the underside of the add-on keyboard. The thinking, presumably, is that you can attach the loop exactly where you want it — left or right side, for example. The trouble is, on our review sample at least, that the adhesive wasn't strong enough; it also takes a bit of shoving to get the pen in and out of the loop. Result: the whole thing can easily come adrift, as it did in our travel bag on its first journey.

Furthermore, the Pen Loop seems more of an afterthought than the elegantly designed solution you're entitled to expect on a premium-priced device. The chance of mislaying your (very useful) stylus remains as high as it was before, unfortunately. For the moment, we advise that you clip it to the groove in the Type Cover keyboard or keep it safely in a jacket or coat pocket.

The Surface Pro 3 runs on fourth-generation Intel Core i3, i5 or i7 processors, our review unit being powered by the dual-core 1.9/2.9GHz Core i5-4300U with 4GB of (non-expandable) RAM. This chip has a maximum TDP (Thermal Design Power) of 15W — the same thermal envelope as the 1.6/2.6GHz Core i5-4200U used in last year's Surface Pro 2. The integrated HD Graphics 4400 GPU is the same as in the previous model.

Storage on our review unit was a 128GB Samsung mSATA SSD; other models are available with 64GB, 256GB and 512GB of SSD storage. If you need more capacity, there's the MicroSD card slot under the kickstand, on the right-hand side.

Soon after the Surface Pro shipped in the US in June, reports emerged of connectivity problems with 802.11ac wi-fi , prompting a number of firmware upgrades from Microsoft. These are still coming — the latest system firmware update on our review system is dated 19 August. We didn't notice any wi-fi connectivity glitches during the review period, but it's worth keeping an eye on the relevant Microsoft forum.

If you want a wired network connection, you'll need to buy the optional £34.99 (inc. VAT) Surface Ethernet Adapter, which will take the tablet's only USB 3.0 port out of the running for any other duty. It's either that or the full £164.99 (inc. VAT) Docking Station option.

There's a pleasing lack of software 'bloat' on the Surface Pro 3, which, apart from OneNote and Fresh Paint (to show off the stylus functionality), has the standard Windows 8.1 Pro complement of apps.

Microsoft's Windows Experience Index (WEI) gives a useful summary of a system's performance, broken down by subsystem. Under Windows 8.1 Pro, the WEI scores are out of 9.9:

Overall, this is decent level of all-round performance, with — as you'd expect — the integrated graphics, and particularly 3D graphics, proving the weakest subsystem. The SSD and Core i5 CPU are the stars of the show.

Microsoft claims nine hours of web browsing from the Surface Pro 3's 42Wh battery. In our tests, which involved taking power consumption measurements under different workload and screen brightness conditions, we estimated that you can expect around 6.6 hours' life with middling screen brightness and a mixture of idle time and challenging workloads. That's an improvement on the 5.4 hours we estimated by similar methods for the Surface Pro 2. However, if you're hitting the system continuously with heavy workloads, don't expect battery life to exceed around 2.5 hours.

During testing we noticed that the Surface Pro 3 gets warm in the top-right section when running serious workloads, whereupon the system's single fan audibly kicks in. One run of the Cinebench R15 CPU test, for example, is enough to warm up the device and set the fan running. This happens more often than it did with the Surface Pro 3's thicker-chassis predecessors, which each had two fans.

As a hybrid tablet/laptop, the Surface Pro 3 is, generally, very impressive. The design changes Microsoft has implemented are largely successful — a bigger 3:2 aspect-ratio screen, a thinner and lighter chassis, useful stylus/OS integration, an improved add-on keyboard and touchpad. Performance and battery life are both acceptable.

So what's to complain about? As far as the hardware is concerned, there are a few niggles: the too-easily-activated Windows touch-button in the right-hand bezel; the risible Pen Loop and lack of any other 'home' for the Surface Pen; the single USB 3.0 port; the lack of a full-size SD card slot; a tendency to run warm under load, with consequent fan noise.

The Surface Pro 3's premium pricing could be an issue for many potential buyers, and the fact that the Type Cover remains a £109.99 (inc. VAT) optional extra is particularly egregious. Given that Microsoft touts the Surface Pro 3 as "the tablet that can replace your laptop", the standard bundle really should include the key component that facilitates this claim.

It won't be for everyone, though. Fans of other operating systems, of clamshell laptops with 'proper' keyboards, of low-end prices, and anyone who can't get on with Windows 8.1's schizophrenic 'Modern'/desktop user experience will need to look elsewhere.