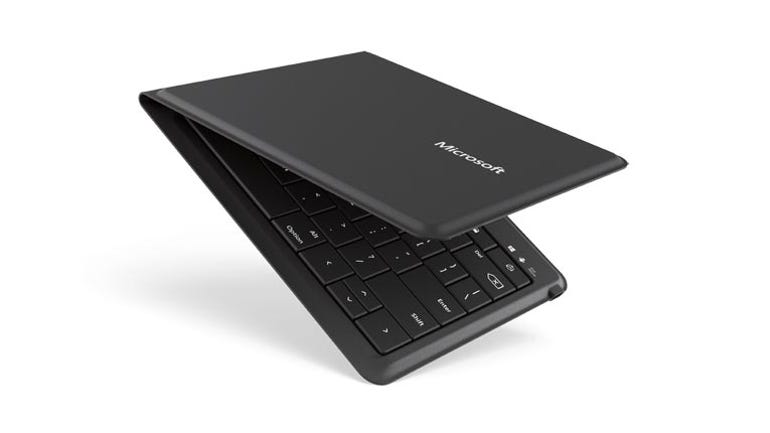 Microsoft has been making good keyboards for a long time, and that experience shows in its mobile versions. The Universal Mobile Keyboard impressed me enough to open my wallet and it is my favorite to use with the iPad Air 2.

The Universal Foldable Keyboard is another mobile option by Microsoft. It folds in half for storage, ready to open for typing in an instant. It is only 5mm thick and will fit in the slimmest pocket on a gear bag. Magnets hold it closed to prevent it from opening in the bag.

Opening and closing the keyboard turns it on and off, respectively. There is a tiny white LED on the upper left side that indicates when it is turned on and paired, which can be done with any Android, Windows, and iOS device that supports Bluetooth. It can be paired with two different devices, and allows switching between the two. The two keys next to the Esc key toggle between them.

The Universal Foldable Keyboard is spill-resistant even though it has "real" keys. They have decent travel and are full size, so rapid touch typing is supported. The keys have a slight rubbery feel and are comfortable to use for extended periods.

Closed, the device is so thin that it looks like a wallet. Handing it to someone who hasn't seen it before results in confusion. They open it and then smile as it's hard to believe a full keyboard is in such a small form.

Once they start typing on it they have one of two reactions. Non-touch typists tend to like it. Those of us in the touch typist camp have a totally different reaction, one of frustration due to two design choices Microsoft made so it would be so portable.

Microsoft chose to put the fold vertically down the middle of the keyboard. This results in a space of almost an inch at the fold and this is the hardest thing to adjust to. Some of the keys near the fold are varying sizes, no doubt to help compensate for the fold; both the gap and the odd sized keys result in quite a few typos. This is the biggest problem with the keyboard, and it's even worse after using it and going back to a regular one.

The top row of keys consists of an Esc key, the two Bluetooth pairing keys, and device control keys including media controls. The upper right key toggles these controls to work properly with iOS, Android, and Windows devices.

The Microsoft Universal Foldable Keyboard is well constructed and with the exception of the noted key design choices is otherwise a good model. It is very portable and the big keys are a nice touch.

It charges via the included microUSB cable and should run three months on a charge.

Bottom line: The Universal Foldable Keyboard is a good idea that falls short in the design with the large gap running down the middle and the odd key sizes on both sides of the gap. This mars an otherwise decent mobile keyboard solution.

In this writer's view Microsoft's other mobile solution, the Universal Mobile Keyboard (see gallery below) is a better option, and is $20 cheaper.

The Microsoft Universal Foldable Keyboard will be available July 14 for $99.95 from Microsoft.