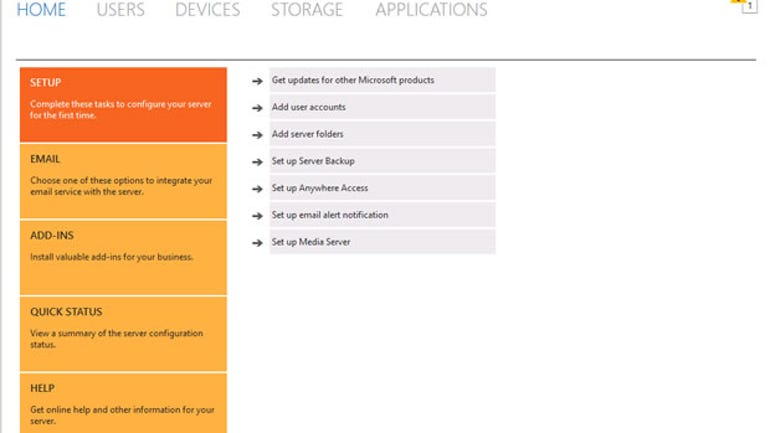 The Windows 8 wave of products is resulting in some significant changes in Microsoft's portfolio. One significant departure is the venerable Small Business Server, made obsolete by licensing changes in the Windows Server product range, and by the 2011 arrival of the company's cloud-based Office 365 . Even so, there's still a need for a small-business server platform — to host applications, and to manage directory services. For despite all the hype, it's still impossible to do everything in the cloud.

That's where Windows Server 2012 Essentials comes in. Building on the current Windows Small Business Server 2011 Essentials , the new server mixes business and consumer features, while providing a gateway to both Microsoft's and third-party cloud services via cloud directory federation. Microsoft's recent changes to its cloud licensing schemes for resellers should allow them to build small-business packages around Essentials and Office 365, offering the combination as a managed service.

You don't need a hefty server to run Windows Server 2012 Essentials, either. The base system requirements are a single 1.3GHz processor, 2GB of RAM and 90GB of disk space (we'd recommend that you use one drive for the OS and set up a Storage Space-based array for user and company data).

Getting started
Microsoft has done a lot to simplify the server experience in Windows Server 2012 Essentials. Installation is easy, with minimal user intervention. All you need is an administrator account and an initial user account, and you're ready to begin. Then it's a quick click from the Metro Start screen to desktop and the Dashboard. The built-in Dashboard is the heart of Essentials, with tools for managing your server and your users. It's also where you'll finish setting up your server, with seven simple steps to finalise the built-in updater, set up user accounts and manage the shared folders for an office. User accounts can be given different levels of access to the shared folders, with the default being read-only.

It's now easier to ensure that user files are kept backed up, thanks to Essentials' support for one of Windows 8's new features — File History. User PCs running Windows 8 will be automatically configured to store file history information on the server — so you'll need to be sure you have enough disk space set aside for users' file snapshots. The process is transparent, so it's a useful tool for system administrators trying to keep user data secure.

Windows Server 2012 Essentials still uses the LaunchPad client to handle full device backups, to simplify access to shared resources and for remote access to a server (as well as giving administrators access to diagnostic information from PCs). Microsoft has said that is developing a Windows 8 Metro application to support additional remote access scenarios, along with a Windows Phone client.

Connecting to the cloud
Email drives the modern business, and even though Essentials doesn't come with a mail server, it's designed to be the heart of any email system, as it gives you a simple way of managing an Active Directory. You can quickly connect to an Office 365 account (using a simple wizard that handles domain federation) or to an Exchange Server running elsewhere in your network. You can add as many servers as you like to an Essentials-managed network — just make sure that the Windows Server 2012 Essentials system is the only Active Directory server in the network.

The Dashboard isn't the only way to manage Windows Server 2012 Essentials: although it's not visible from the Metro Start screen or from the desktop, Microsoft has included the full Windows Server Manager. With support for many of Windows Server's more complex features (and for managing more than one server), the Metro-designed Server Manager is a powerful tool that turns Essentials into the heart of a Windows network and gives small businesses the tools they need to grow their server with their business. Like all Microsoft's current server products, there's also support for PowerShell, so you can use Server Manager to create management scripts that can be used to control your server from desktop PCs.

Essentially resilient
There are more Windows Server 2012 features in Essentials than just the Server Manager. Perhaps the most useful is support for Microsoft's new Storage Spaces technology. Storage Spaces uses server virtualisation techniques to build thin-provisioned storage pools that can be used to replicate the Drive Extender features of Windows Home Server, with an easy-to-manage storage pool that stores data redundantly. Of course redundant storage is no replacement for a backup strategy, but it goes some way to delivering a resilient single server solution for a small office. Microsoft has built-in backup tools that work with external disks, and with its own Online Backup Service (available as a server add-in for Essentials). Both server and client backups now support bare-metal restores, making it easier to get users back online after a hardware failure.

Growing a network has always been issue for Microsoft's small-business servers, and migrating from one to a full-blown Windows Server network used to be challenging (especially when dealing with Active Directory). That all changes with Windows Server 2012 Essentials, and when you reach its 25-user limit, you can just do an in-place upgrade to Windows Server 2012 Standard. The majority of the Essentials features continue to be supported (up to a limit of 75 users), giving you time to migrate to alternatives and to design and build a larger Windows network.

You might not expect to find consumer features in a small-business server, but Windows Server 2012 Essentials has another role to play, as a successor to Microsoft's range of Home Servers. That's why it includes a media server — so you can use it to store music, photos and videos, and then make them available as a shared media library for use with desktop music players, as well as with network-connected music appliances. Those consumer features also include full access to the Windows Store, so you can install and run Metro-style applications on a Windows Server 2012 Essentials system.

Conclusion
Windows Small Business Server 2011 Essentials was something of a damp squib, but there's a lot to like in its successor. The advent of Office 365 made sense for Microsoft to rationalise its server product line, and replacing Small Business Server with an updated and improved version of Windows Server Essentials was the logical thing to do. Microsoft has given it more features, with support for Windows Server 2012 functionality like Storage Spaces. Improved backup tools also make it easier to make Windows Server 2012 Essentials the heart of a small-business network. Some may lament the end of the bundled server products that were part of the Small Business Server package, but Office 365 fills that niche neatly — without requiring additional hardware. The result is a small file-and-print server, with integrated systems management and backup tools that's ideal for a small business or a home office.

Unfortunately it's also a change that will affect the business models of many small software consultancies, which will need to consider how they can capitalise on a simplified server linked to the cloud (and the new Office 365 reseller plans). That's a big change to digest quickly, and it's the biggest stumbling block facing Windows Server 2012 Essentials. Microsoft will need to get its partners on board if its latest entry-level server isn't to go the way of its predecessors.