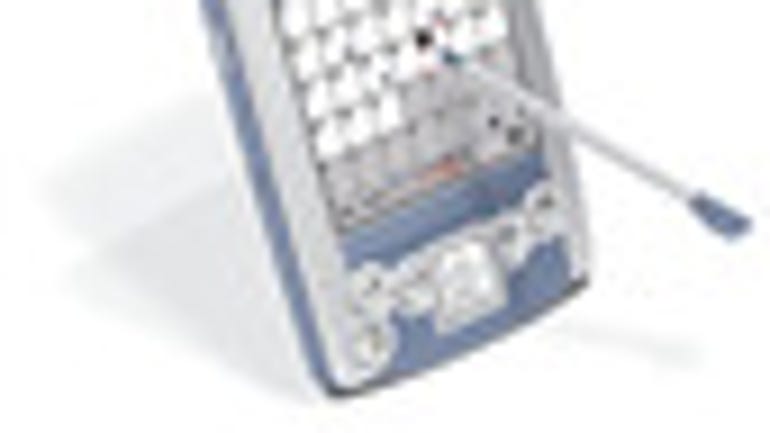 NEC has released its second Pocket PC handheld in the shape of the MobilePro 300E. With so many devices on the market today, it is increasingly important that each one differentiates itself from the others, and there are four key ways in which this can happen: styling, software bundle, expansion opportunities and overall value for money. The MobilePro 300E doesn’t stand out in any of these respects, making it a sound but relatively unexciting product.

The MobilePro 300E's blue and silver casing is relatively safe in design terms, but different enough from the competition, and should have broad appeal. The placement of buttons and expansion options show that attention has been paid to ergonomics -- a scroll wheel sits on the left edge of the casing, with stereo headphone, infrared and microphone ports, the on-off switch and an SD card slot at the top.

Application shortcut buttons are located in the traditional position below the display, along with a four way navigation lozenge and a speaker. It’s a bit of a squeeze getting all these elements in, but last time around NEC combined directional movement and speaker, with the result that volume could be reduced if you were using the navigation button at the same time.

There is an AC power jack on the right edge of the case, which means you don’t have to carry the huge docking cradle around in order to charge the device while on the move. The reason the cradle is so large is twofold. First, it has a slot behind the main housing for charging an extra Li-ion battery. This means you can swap out the internal cell, which NEC says will last for around eight hours, with a replacement if required -- an excellent move. The cradle also accommodates the MobilePro 300E plus a Rocketeer -- an optional IPAQ-style expansion system that provides either a PC Card or a CompactFlash slot. Not such an excellent move.

Limiting on-device expansion to SD cards is one of the main drawbacks with the MobilePro 300E. CompactFlash is a superb medium, and SD still has a way to go before it can compete. We prefer handhelds that accommodate both formats, as these provide potential for wireless network access and memory expansion simultaneously without having to buy additional kit, and without increasing the overall size and weight of the device. The exclusion of on-board CompactFlash has been made, presumably, to reduce the cost and minimise the overall size and weight. It’s a compromise that will suit some users but not others.

Without a Rocketeer expansion unit, the MobilePro 300E’s dimensions and weight are certainly impressive: 146 grams is, if anything, a bit too light -- in the hand, this device feels more like a low cost, low-spec 'electronic organiser' than the £400 handheld computer that it is. Its size, at 12.5cm by 7.68cm by 1.48cm, is also on the small side for a Pocket PC handheld.

The remaining specifications are pretty standard: 64MB of RAM; 32MB of flash ROM; an Intel 206MHz StrongARM processor; a clear and sharp 320 by 240-pixel, 65,536-colour front-lit display. Where NEC does let things slide is in its software bundle, which merely runs to AOL Instant Messenger, MGI’s PhotoSuite for Pocket PC, a game (iGolf) and the excellent Acrobat Reader for Pocket PC -– on top of the standard Pocket PC 2002 application suite of course.

NEC, incidentally, has a close relative in Packard Bell, its consumer brand, and the Mobile Pro 300E is also available as the Packard Bell PocketGear 2060.

NEC’s MobilePro 300E is not the best specified Pocket PC device available, but nor is it the most expensive at £399 (inc. VAT). It functions well, and there are plenty of expansion options, although many of them will come at a price. It's good value if you intend to use it out of the box, but look closely at other devices if you require CompactFlash storage, wireless networking or PC Card expansion.