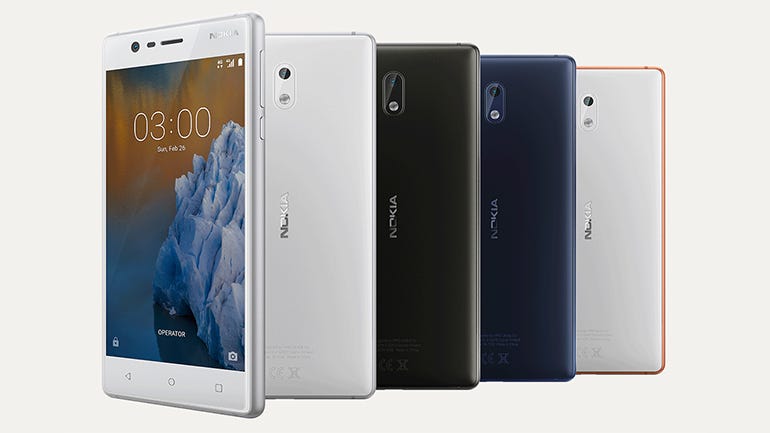 Nokia has had its share of knockbacks in recent times, but the company has not given up on handsets. Its phone brand is now owned by HMD, a Finnish company, but you'd never know. Visit Nokia's website and its Phones, Health (courtesy of the Withings acquisition), Virtual Reality, and Networks streams all sit together as a piece.

The first new Nokia handset to launch was the revamped Nokia 3310, which we reviewed back in May. This runs on a somewhat quirky operating system designed for its small, non-touch, screen.

There's no such compromise with the Nokia 3, or with the better featured and more expensive Nokia 5 and Nokia 6: these far more conventional handsets are aimed at taking a slice of the Android market.

Build quality is impressive. The matte finish polycarbonate back is reminiscent of Nokia's Windows Phone handsets, and is nicely grippy. There's an internal aluminium frame for added robustness, and I wasn't able to bend or bow this phone in my hands.

My white version looks very smart, although there's nothing groundbreaking here: the silver, rounded edges are standard fare, but the overall impression is of a phone that costs more than it actually does. If you're looking for something more distinctive there's a white version with copper-coloured edges as well as all-blue and all-black options.

Under the surface, the budget nature of this handset becomes clear. It runs Android 7 (Nougat) and benefits from a lack of unnecessary extra software. Nokia says it will provide regular updates, so if you're seeking a budget phone that stays up-to-date with Android, you may be tempted.

The chipset is a 1.3GHz quad-core MediaTek MT6737 supported by 2GB of RAM, which is pretty basic fare. I managed fine with everyday web browsing, email, texting and a bit of app use. But I'm not a heavy mobile gamer -- anyone who is will need a much beefier handset.

Storage will also be a problem for some people. There is 16GB on board, of which 6.7GB is occupied out of the box, so it's helpful that a MicroSD card slot is available, on the left edge of the chassis, which can add up to 128GB more.

Then there's the 5-inch screen, which is a Gorilla Glass-protected IPS LCD. The ambient light sensor sets the brightness a bit low for my taste, although the maximum 450-nit level is fine. However, the issue for many will be the screen's resolution: 1,280 by 720 pixels, or 294ppi, is bordering on unacceptable these days. I found streaming video, in particular, was a little unrewarding.

Sound output through the single speaker is rather disappointing too. It has a fair amount of volume, but is very short on bass tones. Moreover, because the speaker is located on the bottom of the handset it was often covered when I held the handset in landscape mode, reducing volume to a muffled whisper.

Nokia has managed to squeeze NFC into the specification, which is a nice touch for an entry-level handset. I also think it's a plus that the battery charges via old-fashioned Micro-USB, as budget-limited buyers may be less likely to want to upgrade to USB-C. The cameras are nothing to write home about: both are moderate-resolution 8 megapixel units, and the rear camera's LED flash doesn't do a great deal to improve low-light shots.

The non-removable 2,630mAh battery will probably deliver a day's life on a single charge, so long as workloads are light. But if you like to use GPS, play a lot of music, or do a lot of video streaming, you might find you need to recharge during the day.

Buying on a budget is always a compromise, but there's a lot to like about the Nokia 3. It punches above its weight in the looks department and the inclusion of NFC is a plus. Unskinned Android with the promise of regular updates will also go down well with many potential buyers, but the screen resolution is disappointing.