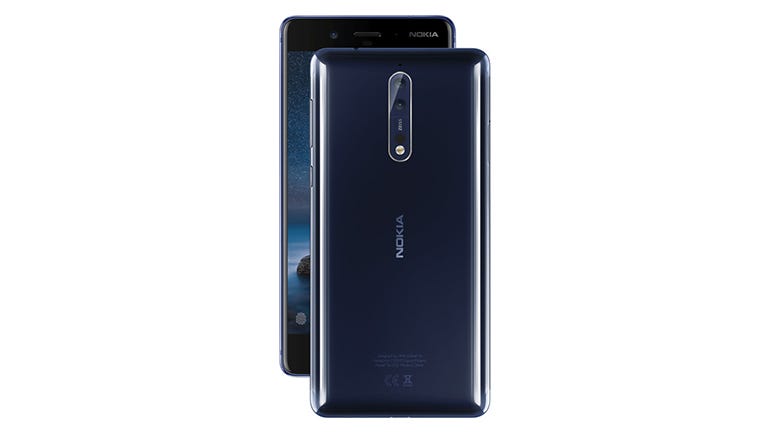 The Nokia 8 is Nokia's new flagship smartphone, joining stablemates like the revision of the classic candybar Nokia 3310, the entry-level Nokia 3 and the mid-range Nokia 5 and Nokia 6.

It's worth noting that, despite the branding, Nokia doesn't actually have much to do with this new range. The venerable brand name is now licensed to Finnish company HMD Global, and while the handset range is easily found at Nokia's website, it sits alongside a portfolio including digital health (courtesy of the acquisition of Withings), virtual reality and networking infrastructure.

The big draw of the Nokia 8 is that it is a top-spec phone that aims to gives flagship rivals from Samsung, Apple, and HTC a run for their money, while being considerably less expensive. Its main rival, in price/performance terms, is the well-received OnePlus 5.

The hardware design is suitably impressive. Rounded corners and a small home button/fingerprint sensor sit beneath the 5.3-inch screen. The edges are curved into the back, and the unibody design is neat and tidy. The right edge houses beautifully built power/lock and volume keys that deliver a satisfying but quiet click when pressed. The left edge houses the SIM and MicroSD card caddy.

My review sample had a copper coloured back that was much more reflective and slippery in the hand than I like. There are other options, though: an equally shiny and reflective blue, and matte finishes in blue and grey.

On the back the dual cameras take centre stage, sitting in a raised vertical lozenge that makes them stand out from the backplate. The top and bottom edges house the antenna bands. They are located here for minimum interference when the phone is being held, and are designed into the overall look of the handset.

On the handset's front, the screen isn't quite edge to edge on the long edges, and the top and bottom bezels are quite large at 14mm and 17mm respectively. This results in a screen-to-body ratio of 69.2 percent, compared to 84.1 percent for the class-leading Samsung Galaxy S8. The bottom bezel provides space for the home button/fingerprint sensor and two capacitive buttons.

It's a neat design that's appealing enough, but there's nothing particularly special or different about it. Still, it's a reasonably tough handset: I couldn't bend it at all in my hands, and the screen is protected by Gorilla Glass 5. The Nokia 8 has an IP54 rating, meaning that it's 'dust protected and can withstand 'water splashes' for up to 10 minutes. Many flagship smartphones have better (IP67 or IP68) ratings, although the OnePlus 5 is not IP-rated.

The Nokia 8 also meets the slimline requirements of a modern high-end handset, measuring just 7.9mm thick, 151.5mm tall and 73.7mm wide. It weighs 160g, and it feels in the hand like a solid and serious device.

It's debatable whether this QHD resolution is really required in a handset. I switch regularly between different phones, and often don't really notice much difference between QHD (1,440 x 2,560) and FHD (1,080 x 1,920) resolutions. There is another factor to take into account, though: the Nokia 8's screen is very bright, making it easy to read outdoors in sunlight.

The Nokia 8's flagship-grade specifications stretch to the underlying platform, which include Qualcomm's top-end Snapdragon 835 chipset and 4GB of RAM. The handset ships with Android 7 (Nougat), which is not augmented by any kind of skin so everything runs impressively quickly. Web pages load with satisfying speed, streamed video is smooth, and apps open without delay. There is 64GB of internal storage, of which 15GB is used out of the box.

Handsets can get warm when the processor is handling tough workloads, and to help avoid this the Nokia 8 has a full-length copper cooling pipe with a graphite shield inside the shell. This is designed to dissipate heat across the full body of the phone; my review unit certainly stayed cool during the test period.

And so, to the camera. Or rather, the cameras. On the front is a 13-megapixel camera, while on the back there are two more 13MP cameras -- one colour, one mono -- along with a flash and IR range finder. Dual rear cameras offer advantages: you can shoot true black-and-white images, and also capture better quality photos in low light than you'd get with most single-camera setups. I've only been using the Nokia 8 for a relatively short time, but low-light shots do seem better than the average.

The main camera innovation is Dual Sight mode, which enables the 'bothie'. Whereas a selfie uses just the front camera, a bothie captures images from the front and rear cameras at the same time. The trouble is, it doesn't work that well in practice. A split-screen image that shows views from front and back cameras is just that, and often simply looks like two separate photos spliced together down the middle. It's not particularly exciting.

The ability to capture Dual Sight video is more enticing, and the other potentially useful camera feature is its ability to livestream to Facebook and YouTube.

The Nokia 8's 3090mAh battery has to keep a bright, high-resolution screen going and service a powerful processor. Although Nokia doesn't supply battery life estimates, we found that the handset performs well in this respect: an average day's use involving a few calls, some web browsing, and some media streaming left me with 65 percent remaining. When power does run low, the Nokia 8 supports QuickCharge 3.0 via its USB-C port.

The Nokia 8 is well made, although it lacks any design features that make it stand out from the crowd (unless you count the reflective copper finish on my review unit). It offers excellent battery life and a very good 5.3-inch screen. It's nice to see pure Android 7 on board, which should bode well for a fast upgrade to Android 8 (Oreo).

The dual camera setup produces good photos, but the 'bothie' concept is uninspiring, and probably not a game-changer. Although there's little truly remarkable about the Nokia 8, it packs an impressive punch at a competitive price.