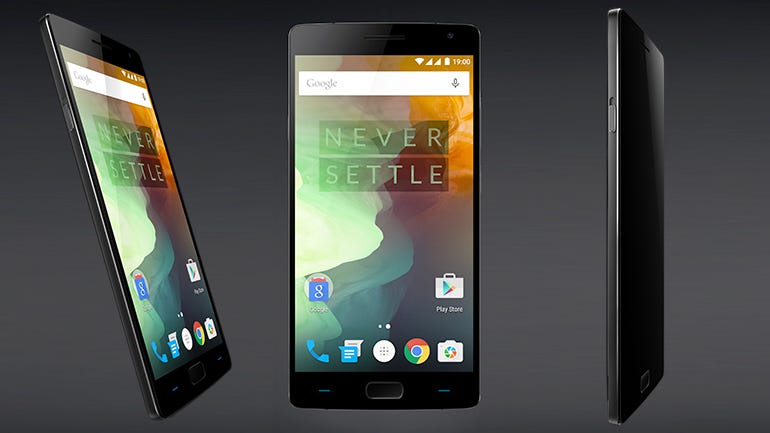 It comes to something when a relatively new handset maker bills its new smartphone as a '2016 Flagship Killer'. That's an aggressive claim: OnePlus -- founded in Shenzhen, China, in December 2013 -- is implying that a reasonable outlay will buy you a handset that can knock the top vendors' flagship phones into a cocked hat.

There are two versions of the OnePlus 2 available. For £239 (US$329) you get 16GB of internal storage and 3GB of RAM, while £289 (US$389) you get 64GB of storage and 4GB of RAM. There's no MicroSD card slot to boost the storage capacity, so you'll need to make the right decision at purchase time. The OnePlus 2 is on sale now, but you'll need an invite and only the 64GB/4GB model is currently available on the OnePlus store. You can also choose from four optional SwapStyle Covers to smarten up the back of the handset: these come in Bamboo, Rosewood, Black Apricot and Kevlar, and cost £19.98 ($26.99) each.

The remaining specs are the same for both models, and they are impressive considering the handset's price.

The 8-core, 1.8GHz Qualcomm Snapdragon 810 SoC is no slouch, and for those who have read about it running warm in other handsets I can say that in my relatively short time with the OnePlus 2, using it for mainstream communication/media consumption/productivity tasks, it has run impressively cool.

The rear 13-megapixel camera has a 6-element lens, a dual-LED flash and optical image stabilisation, while the front-facing camera has a 5-megapixel sensor. Limited opportunities to test the camera thus far have not revealed any serious problems with point-and-shoot photography.

Android 5.1 comes with a proprietary layer -- OxygenOS. This is a change from the CyanogenMod that came with the OnePlus One. It's a light-touch addition to Android, and those who don't like their OS customised beyond all recognition should find it fine to work with. Additions like Waves MaxxAudio for tweaking sound output and the ability to set permissions on an app-by-app basis are nice to have -- and you can easily ignore them if they aren't useful. The same goes for icon packs that can be used to customise the look and feel of the user interface.

There are some nice extras too. On the hardware side, a slider button on the left edge has three positions that dictate how notifications are received -- all, just priority notifications or no notifications. Yes, that could be controlled in software, but it's a differentiating touch.

There's a fingerprint sensor below the screen which you can configure to unlock the handset. I found it a little tedious to set up, with multiple taps on the sensor pad required before my finger was recognised. Once that job is done (for up to five fingers), the unlock process is accurate and fast.

The vibrant red USB cable is a USB type C. One immediate benefit is that it's shaped symmetrically at both ends -- no more fiddling to get the cable the right way up! Of course that does mean your 'standard' USB cable for charging multiple devices doesn't fit the slot.

There's no NFC, so OnePlus 2 owners might miss out if NFC-based payment systems take off; and if you're a fan of infrared for remotely controlling your TV and other home entertainment kit, you might rue its absence here. But in general the OnePlus 2 has a good set of specifications. It's a GSM/WCDMA/LTE handset (with support, outside North America, for LTE band 20, which was missing from the OnePlus One). It supports the full complement of wi-fi standards (802.11a/b/g/n/ac), along with Bluetooth 4.1, GPS (with GLONASS support) and a digital compass.

The battery is a 3,300mAh lithium polymer unit -- slightly more capacious than the 3,100mAh battery in the OnePlus One. There's no support for fast charging or wireless charging, though.

As far as build quality is concerned the OnePlus 2 is slim, and quite tall for its screen size, measuring 151.8mm by 74.9mm by 9.85 mm. It's also on the heavy side at 175g (6.17 ounces). I certainly noticed it sitting in a pocket. Still, it feels tough, and the grippy 'wet-and-dry-sandpaper' finish to the standard backplate is retained from the OnePlus One.

So, is the OnePlus 2 really a 'flagship killer'? That's a bit strong, in my opinion, given the number of missing features -- notably NFC, fast charging and wireless charging. If money were no object I'd still rather have a truly boundary-pushing top-of-the-range handset. But if your budget won't stretch and you're looking at £290/$390 or thereabouts as your limit, then the OnePlus 2 looks as though it will remain a strong contender well into next year -- unless more big-name vendors start slashing the prices of their flagship handsets, Motorola Moto X Style-style.