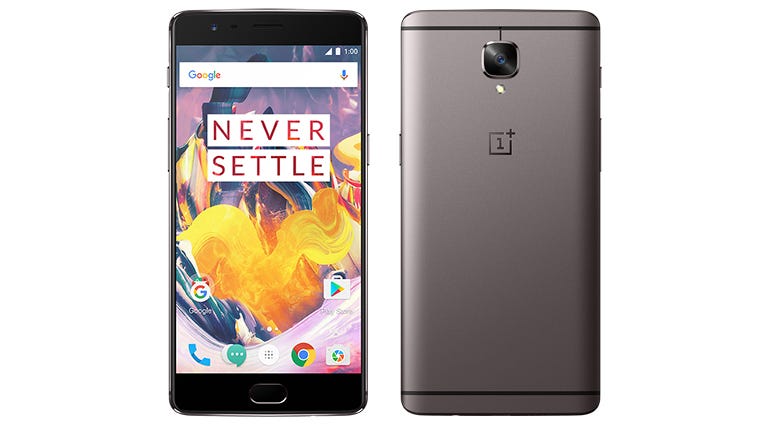 At the end of November last year I was sent a OnePlus 3T. This appeared relatively hot on the heels of the OnePlus 3, which I'd reviewed in the middle of 2016, judging it to be the best smartphone in its price range. Having set the OnePlus 3T up as my main handset, I've had a chance to examine it in depth over the holiday period.

The OnePlus 3T is built in the same body as the OnePlus 3, but there are some significant internal upgrades, making it an altogether more capable handset than its predecessor. Although the upgraded model is more expensive, it's still much more affordable than flagship devices from the leading smartphone vendors.

A certain amount of wrangling is required to gain access to the internal storage for direct file transfer from a PC. Driver installation, enabling developer options and ensuring that the USB connectivity mode is set to allow for file transfer is a bit more involved than simply plugging in and using the handset's memory like standard external storage. But you only need to do this once, after which the internal storage is accessible through a cabled connection in the usual way.

There's no MicroSD storage in this handset. Like the OnePlus 3, the 3T has a dual-SIM caddy that bucks the current trend for making one slot available for either SIM or MicroSD. On the plus side, this means that 'dual SIM' really does mean 'dual SIM', but users will have to be content with internal storage only.

One of the things I was keen to try with the OnePlus 3T was 3D apps and games. These can eat up storage, so that 128GB came in handy. I'd been sent a OnePlus Loop VR headset some time earlier, and although isn't the place for a full review, I should note that, in complete contrast to the OnePlus 3T, the Loop VR was disappointing. While it accommodated my glasses easily, I found it heavy and unwieldy and it was a squeeze to fit the handset into its holder. The Loop VR lacks any control features, which means that apps need to be running before they're inserted into the headset.

I did learn one new thing during this experiment, which is that although playing first-person games in general doesn't make me nauseous, using VR apps on the OnePlus 3T does. Nor am I happy about having bright light from the handset's screen so close to my eyes.

I did miss the quad-HD (2,560 by 1,440) resolution of the handset I'd been using previously, but if I'm honest that's mostly because it allows me to cram more app shortcuts onto the main screen -- five on a row instead of four. In everyday use I found nothing irritating about the OnePlus 3T's FHD (1,920 x 1,080) screen.

The hardware design is unchanged from that of the OnePlus 3, and that's a good thing. Solid metal for the back and sides means I can't bend or bow the phone in my hands. The 'gunmetal' colour of my review unit is a nice deep grey, and there's also a lighter 'soft gold' option. What I really like about the OnePlus 3T hardware design is the 'alert slider' on the left-hand side. I use this all the time to switch between all alerts, priority alerts and silent mode. It's much more user-friendly than having to use software switching as in my previous handset, and I know I'll miss it greatly if I revert.

The home button isn't really a button as it doesn't depress. It's very responsive, however, and has embedded fingerprint recognition. Fingerprint unlocking quickly became my default: it's fast, and has never once failed to recognise my unlock finger.

One of the key upgrades in the OnePlus 3T is the processor. The Qualcomm Snapdragon 821 with its four Kyro CPU cores (two clocked at 2.35GHz and two at 1.6GHz), Adreno 530 GPU and 6GB of RAM delivers significant performance and power consumption improvements over the Snapdragon 820 in the OnePlus 3. My review unit certainly coped admirably with everything I asked of it -- including gaming, video streaming, downloaded video playback and 3D apps.

OnePlus's OxygenOS sits on top of Android -- the time of writing I'm still running Marshmallow (version 6.0), although updates to Nougat (version 7.0) are apparently rolling out along with an update to OxygenOS.

The OxygenOS overlay makes multiple useful additions to Android that give it a real lift in terms of usability. For example, the 'shelf' is a shortcuts screen to the left of the home screen that includes recent contacts and recent apps and brief weather data; it can also accommodate widgets. Many tweaks added in the settings area, including the ability to customise notification colours and adjust the shortcut buttons, giving them long-press app shortcut launching, changing their order and disabling on-screen buttons in favour of below-screen ones.

There are some useful gesture controls too. It didn't take long for me to start drawing an 'O' on the lock screen to launch straight into the camera, a 'V' to toggle the flashlight. I also loved waving a hand across a darkened screen to view notifications. Going into more detail, each of the three alert settings (silent, do not disturb and ring) can have some detailed settings made, with 'do not disturb' offering the greatest level of customisation.

I made great use of the OnePlus music app, which offers a welcome pared-down playback experience. The app sorts by album, artist, song and tag, and there are shortcuts to recently added and recently played tunes as well as a search facility. Those tags are user-assigned -- I set up a bunch of tunes to work to, for example.

The speaker, mounted on the bottom edge along with the headset jack, delivers good enough quality sound and volume for casual listening -- I was happy enough using the phone for background music while working, for example. Audio is perfectly acceptable when using headphones too.

The camera hasn't had a huge amount of use, if I'm honest. My usual handset usage pattern doesn't revolve around lots of photography, and when I do take photos with a phone I don't need fantastic quality. That's what my real camera is for. Still, I've been happy with the OnePlus 3T's image quality and ease of use. In manual shooting mode it's even possible to capture RAW images. Selfie fans will also be pleased, no doubt, to see the front camera get the same 16MP resolution as the rear one.

Battery life is superb. I haven't run out of power on any single day since switching to the OnePlus 3T. It's still a bit annoying to have to remember to carry the USB-C cable, and more annoying that the charging unit also has to come along if I want to take advantage of Dash Charge, which is the OnePlus fast-charge system. I've yet to see Dash Charge provide the website's claim of "A day's power in half an hour". I get about 50 to 60 percent of a charge boost in that time, but that's still good going. The habit of charging first thing in the morning set in quickly and works well.

Using the OnePlus 3T for an extended review period has been a pleasure. If you're looking at flagship smartphones from the leading vendors, you'd do well to add the considerably more affordable OnePlus 3T to the mix.

In the spirit of the OnePlus mantra 'never settle', I've got two requests for the next handset: to include MicroSD support (and I mean true support, not a shared SIM slot), and to boost the screen resolution without sacrificing any of the handset's power efficiency or raising the price. Well, if you don't ask, you don't get!