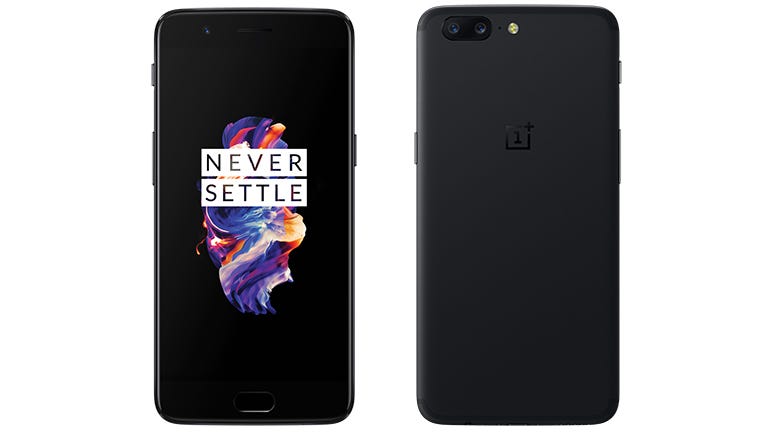 The progress of OnePlus over the last few years is nothing short of remarkable. The company has made some excellent handsets, characterised by understated design, exemplary performance and great features -- all for a competitive price.

The challenge for the OnePlus 5 was always going to be keeping up this good work. Thankfully, while OnePlus has moved up the price ladder, it has not lost sight of the need to deliver value for money. That's here in abundance.

The OnePlus 5 is the next in a numerically named series. The OnePlus 3T, which became available in November last year, was its immediate predecessor -- OnePlus has chosen not to release a '4' model, due to that number's unlucky connotations for the Chinese firm.

Sitting the OnePlus 3T and the OnePlus 5 side by side reveals how little this new handset differs from its predecessor in design terms. With the fronts facing anyone would be hard pressed to tell the difference, and the same goes for the four edges of the handset too.

The other visual change is the camera design. One of the key features of this handset is its dual camera setup, of which more later. Here we'll note that the lenses protrude from the back of the chassis, lack protection and may suffer from scratches in the long term.

Despite not looking particularly eye-catching, everything about the design has been thought through. The result is a mix of materials and design elements that work together really well, from the many subtle curves around the edges, which make the phone a comfortable hold, to the aluminium back that presents a cool face to the palm.

The metal unibody also gives this handset a degree of protection against knocks and drops, and that's further bolstered by the use of Gorilla Glass 5 for the screen.

On its left edge is the now familiar, and very popular, three-position button that easily sets the phone into 'silent', 'do not disturb' and 'ring' modes. This is stippled so it's easy to find by touch. Below this is a volume rocker. The right edge has the power button and a SIM caddy that will accommodate two SIMs. There's no support for storage expansion via a MicroSD card.

On the front of the handset below the screen is a fingerprint reader that works impressively quickly, although it is a little awkward for one-handed unlocking.

The 5.5-inch AMOLED screen sits almost the full width of the body. Its full-HD (1,920 x 1,080 pixels, 401ppi) resolution is unchanged from the OnePlus 3 and 3T. Users can fiddle with the colour settings, choosing between a couple of presets or using a slider to position colour temperature between 'cold' and 'warm'. The default settings seemed fine to me.

I'd like to see a hike in screen resolution, but fully accept that this may have consequences for both battery life and performance. Still, I was perfectly comfortable reading web pages and ebooks, watching streamed video and playing games on the 1080p screen.

The screen is enhanced by 'Reading Mode', which filters out blue light for a more comfortable reading experience. This can be configured manually or set to run automatically once any predefined app is opened. There's also a 'night mode' setting that can adjust the colour temperature according to preset times or via the ambient light sensor.

These screen readability features come courtesy of OxygenOS, the Android overlay that OnePlus uses to provide a host of additional features. With the OnePlus 5 we are at OxygenOS 4.5 and Android 7.1.1.

The mix makes for a relatively simple user interface that's got a lot of additional functions designed to add useful features rather than simply 'blingy' stuff.

For example I am a particular fan of what OnePlus calls 'expanded screen shots'. This is the ability to take screen shots that are longer than a screen itself, which I've found useful when capturing information for sharing with others or for later use myself.

But there are plenty of other tweaks too, from a range of gesture controls to custom vibration settings for incoming calls. And I'm sure I'll find a use for the PIN-protected 'Secure Box' for ultra-private information. Serial gamers will like the 'Gaming Do Not Disturb Mode', which turns off notifications and can be invoked when specific apps run or turned on manually.

The specifications are pretty top-notch for a handset at this price: 802.11ac wi-fi, Bluetooth 5.0 and NFC are all present, and OnePlus has gone for the top-end octa-core Snapdragon 835 chipset with Adreno 540 GPU which zipped along at lightning-fast speed.

The 8GB of RAM on my 128GB-storage review model will have helped here, although whether 8GB is really needed is a moot point. If you're looking to make a cost saving, you can drop down to the 6GB-RAM model, although you'll have to get by with 64GB of internal storage -- and remember, there's no MicroSD card support.

The quality of the bottom-mounted speaker is OK but not wonderful -- in fact this is probably the most annoying aspect of the OnePlus 5. The speaker goes very loud, but audio is harsh and tinny at top volume. Sound quality through a headset is thankfully much better.

And so to the rear camera, which is a key selling point for this handset -- OnePlus is at pains to point out that this is the highest resolution dual-camera system on the market. It has a 16-megapixel wide-angle camera plus a 20-megapixel 2x-zoom telephoto camera.

The f/1.7 aperture of the 16-megapixel camera captures 34 percent more light than on the OnePlus 3T, and indeed low-light shots aren't bad at all. The larger aperture also caters for faster shutter speeds, which should mean sharper images.

I've only had a brief time to play with the camera, but it does seem to be pretty good. It's handy to be able to flick that 2x zoom on and off with an on-screen button, and then to ratchet up further to 8x digital zoom with a slider if required. Among the various shooting modes available, 'portrait' has a myriad of uses thanks to its background blurring. It's a feature with a wider application than just people shots.

Switching into 'Pro' mode pulls up a histogram, dial wheels for white balance, shutter speed, focus and exposure, and an alignment line to let you know that shots aren't skewed. And it captures RAW.

The 16-megapixel front camera has some neat tweaks too, including using the screen as a flash, plus HDR support.

People who use their handset camera for basic snaps shouldn't find the features too numerous or too difficult to get to grips with, and anyone wanting to fiddle with manual settings should find the interface pretty straightforward too.

Battery life is remarkably good. After a relatively short test period I'm confident that the 3,300mAh battery would deliver me all-day life on all but very heavy-workload days. There is another plus if you're prepared to carry the provided AC adapter and USB-C cable, as these support OnePlus's fast-charging Dash Charge system. A half-hour boost typically delivered about 50 percent charge.

With the OnePlus 5, OnePlus has again produced a great phone for the money. Still, there are a few drawbacks. Even with 128GB of storage available I'd have liked a MicroSD card slot, for example, and the speaker really isn't up to scratch.

Still, battery life is very good, build quality is exemplary, fingerprint recognition is speedy and reliable, and the dual rear camera system performs well. I'm also a huge fan of Reading Mode. There's a lot of competition among 'flagship-killer' smartphones, but despite a price rise the OnePlus 5 is arguably leader of the pack.