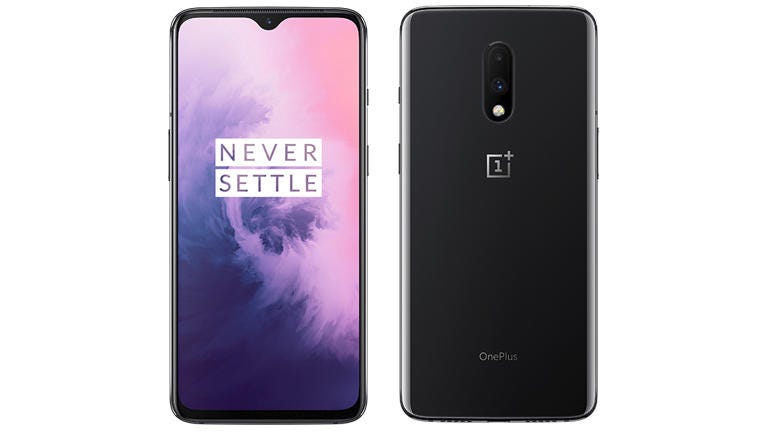 Flagship-class handsets from OnePlus are often referred to as 'the one to beat', but how should the company develop its smartphone range? Is the pressure to push on hard, innovate, and maybe drop the ball, or to come out with an update that keeps pace with technology trends in an incremental and affordable way?

OnePlus has adopted both approaches. If you want the latest bells and whistles, there's the OnePlus 7 Pro with its curved screen and pop-out camera, which is available for a far from mid-range price (starting at £649 inc. VAT). If you want a more incremental update, perhaps from a OnePlus 5, OnePlus 5T, OnePlus 6 or OnePlus 6T, there is the OnePlus 7.

The OnePlus 7 comes in a couple of configurations. The base model costs £499 and has 6GB of RAM and 128GB of internal storage. For £549 you get 8GB of RAM and a massive 256GB of storage. These prices edge outside the mid range, but still give you an awful lot of phone for the money, including incredible design and excellent battery life. I had the more expensive option to review.

My Geekbench battery rundown test got 11 hours and 10 minutes from the 3700mAh battery, and that's with the screen always on. In the real world, I regularly got half way through a second day before needing a charge. And when I did, the rapid charging can provide about 60 percent charge in half an hour. Admittedly this is not up to the standards Oppo has set (the rather lovely Oppo RX17 Pro gains 40% in 10 minutes), but it meant that a quick charge in the morning set me up for the day.

OnePlus has chosen a glass back for the OnePlus 7, which, while fashionable, did mean that the handset slipped around on my armchair with vibrate notifications switched on, and it took a few tumbles onto the carpet. It's also a bit slippery in the hand. OnePlus provides a bumper that deals with the problem, at the cost of extra bulk and compromising the aesthetics.

I'm delighted to see the Alert Slide switch that turns the ringer into silent, vibrate or on modes is still here. When reviewing a OnePlus handset I use this a lot, and miss it when I move on to another phone. Having it here again was like spending time with an old friend.

There's no 3.5mm headset jack here, and OnePlus doesn't provide a USB-C adapter. Sound quality from the stereo speakers is very respectable, delivering plenty of volume with good bass tones even at top volume. There's no fingerprint sensor at the back, but the in-screen sensor was fast and I was happy using it.

The 6.41-inch AMOLED screen incorporates a small notch for the front camera and has a resolution of 2,340 by 1,080 screen for an aspect ratio of 19.5:9. I was perfectly happy with the screen when checking my calendar, using street mapping out and about, reading web pages and ebooks. The Reading Mode, which turns the screen black-and-white and can be set to kick in when specific apps are opened, is superb.

A Snapdragon 855 chipset provides the power for this dual-SIM handset. My 8GB/256GB review unit had 20GB of internal storage used out of the box, leaving 236GB free. The OnePlus 7 delivered average Geekbench 4 scores of 11227 (multi-core) and 3519. I last saw multi-core scores over 11,000 from the Sony Xperia 1 and Asus Zenfone 6.

At the back there's a 48MP main camera with an f/1.7 lens and both OIS and EIS, and a 5MP secondary camera with an f/2.4 lens. The front-facing 16MP camera is no advance on the OnePlus 6T, but the 6T is hardly long in the tooth. You can't expect a mid-range handset to push the camera envelope, but I didn't spot any glaring issues here.

The OnePlus 7 runs on Android 9 Pie with Oxygen OS overlain. I'm a big fan of the clean, simple design of Oxygen, and have already mentioned Reading Mode. Other features include a screen recorder and a 'parking location' feature: swipe right, and you'll find a simple map-based 'remember where I left the car' tool, along with the opportunity to take a picture of your car in situ. This has potential way beyond finding the car again, and is a neat little add-on. Oxygen is one of the subtler Android skins, and it's definitely worth exploring.

OnePlus has more competition than it did a year ago. The Oppo RX17 Pro costs £477 and has a range of features that, as I wrote in my review, make it a compelling competitor for the OnePlus 6T. The same goes for the Xiaomi Mi 9 and the Honor View 20, and there are plenty of other handsets at around this price. For me, the OnePlus 7 offers enough to rate highly -- but buyers have a lot more choice these days.

Huawei's Android puzzle: Is Linux Sailfish now an option alongside its own OS?