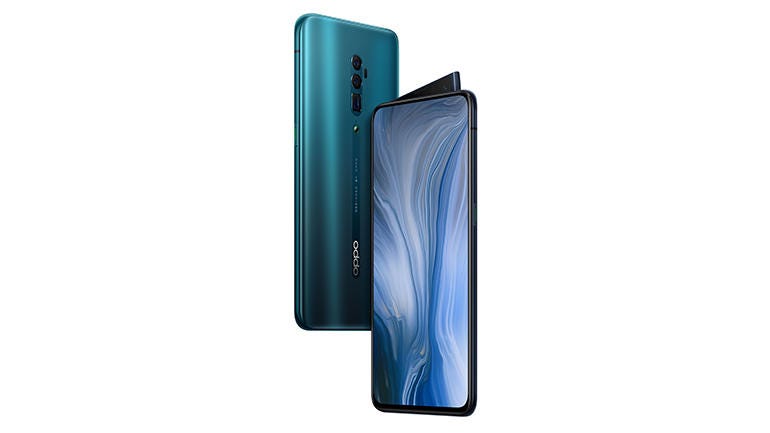 Oppo may not be the best-known smartphone brand in the UK and Europe, but the Chinese company was number five in IDC's latest (Q2 2019) tally of worldwide shipments, behind Xiaomi, Apple, Huawei and Samsung. As IDC noted: "Consumers are no longer as obsessed with upgrading to the latest and greatest smartphone. But when they do, or when first-time buyers join, they're increasingly considering a Chinese company over Samsung or Apple." Oppo's sponsorship of the recent cricket world cup will have done its visibility no harm either (among nations that understand cricket, anyway).

We've reviewed a couple of Oppo handsets to date, both with 6.4-inch screens: the RX17 Pro, which is notable for good battery life and fast charging, and the FindX with its pop-up camera mechanism. Now we have the company's latest flagship Reno series, whose standard-bearer is the £700 (inc. VAT), 6.6-inch 10x Zoom that, as the name suggests, majors on photography. The standard Reno model has a 6.4-inch screen, lacks the 10x zoom and costs £450 (inc. VAT). There's also a 5G version of the 10x Zoom, currently available in the UK from EE.

First impressions of the Reno 10x Zoom are of a typical shiny slab-of-glass handset, but closer inspection reveals some design innovation and good attention to build quality. The 6.6-inch Gorilla Glass 6-protected OLED screen is entirely free of interruptions for the front camera or fingerprint reader, and therefore largely bezel-free -- we measured the screen to body ratio at 85.4%, although Oppo claims 93.1%. The Reno 10x Zoom measures 77.2mm wide by 162mm tall by 9.3mm thick and weighs 215g, which puts it in the chunky/weighty bracket, especially when encased in the bundled protective case. Even so, I had no cause for concern in this area.

The front is notch/hole punch-free thanks to the Reno series' stand-out feature -- its 'pivot rising' front camera, which pops up the camera, earpiece and flashlights from inside the chassis at an 11-degree angle. Oppo says that this mechanism can be used successfully more than 200,000 times (that's around 100 times a day over 5 years). If you drop the phone, the camera will be automatically retracted to avoid damage. We tried this, and it worked. Minimal-bezel status is also helped by the in-screen fingerprint reader, which worked quickly and reliably for us. Face unlock is also available.

The back is a smooth, glossy expanse of polished glass -- Jet Black on our review sample, with 'hints of gray and blue gradients', according to Oppo. Gorilla Glass 5 is used for the back, which is also available in Ocean Green. Because the Reno 10X is relatively thick (9.3mm), the three camera lenses do not protrude at all, so to prevent contact when the phone is laid on a flat surface, Oppo has added what it calls the O-dot -- a 'ceramic gem' designed to lift the handset ever so slightly. This is a thoughtful touch, but -- as I do with all slippery slabs of glass -- I immediately slapped on the protective case, thereby rendering the O-dot and the shimmering glass back irrelevant.

Buttons and ports are where you expect to find them: power on the right, volume rocker on the left; USB-C and speaker grille on the bottom. There's no 3.5mm headset jack: a serviceable USB-C headset is provided, but no adapter if you want to use an existing unit with a 3.5mm connector.

Although the Reno's pop-up front camera is a neat trick, it does have a major downside in that IP certification for dust and water resistance is not possible. Don't use this handset in the bath -- especially without the grippy protective cover.

The Reno 10X Zoom is built on a solid 2019 flagship-class platform: Qualcomm's 7nm octa-core Snapdragon 855 chipset with 6 or 8GB of RAM and 128 or 256GB of internal storage. Our review unit had 8/256GB. This is a dual (Nano) SIM handset, and one of the SIM slots can be used for external MicroSD storage if necessary.

We noted that the Reno 10x Zoom is relatively bulky, thanks to the cameras being flush to the back of the chassis. This allows Oppo to fit a good sized 4,065mAh battery. Fast charging (20W, VOOC) is supported, but not wireless charging.

Despite the similarity of its camera system to the Huawei P30 Pro, the Reno 10x Zoom can't quite match it, particularly when it comes to low-light performance. That said, Oppo's flagship handset does a pretty good job.

Here are images with 1x and 10x zoom:

The Reno 10x Zoom runs Android 9 Pie with Oppo's UI overlay, ColorOS. New features in the latest version (6) of ColorOS include a redesigned control and notification centre, a choice of standard and drawer-type home screen modes, plus redesigned apps (clock, calculator, weather, music and others) and bigger, more readable, fonts in settings dialogs.

The combination of Snapdragon 855 and 8GB of RAM delivers the expected (very good) level of performance on the Geekbench 4 CPU test: 2992 for single-core and 10901 for multi-core operation.

To test GPU performance, we ran the 3DMark Sling Shot Extreme benchmark, which returned scores of 5704 on the OpenGL test and 4985 on the Vulkan test. Class-leading scores are 5744 (OpenGL) and 4993 (Vulkan).

The Reno 10x Zoom's 4,065mAh battery took 2 hours 57 minutes to deplete to 80 percent under the Geekbench battery benchmark for an estimated battery score of 8550, which is an excellent result. You can certainly expect all-day battery life with this handset, even when running a fairly demanding mix of workloads.

Performance and battery life are good, and the industrial design is both eye-catching and robust. The pop-up front camera does rule out an IP rating, and wireless charging isn't supported, but there's little else to complain about.


Samsung Galaxy Note 10 Plus vs Note 9: Is it worth the upgrade?