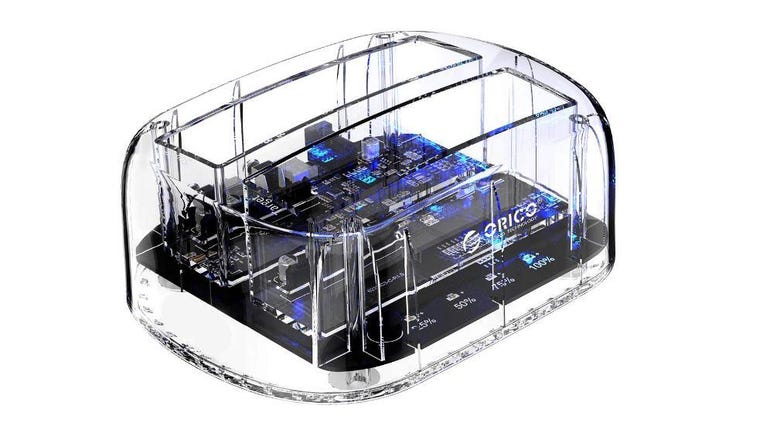 The Orico 6239U3 hard drive dock has fast data transfer speeds and offline cloning in an attractive transparent enclosure.

I build PCs fairly regularly and I use the LAN to copy over contents from hard drives. Sometimes I want to clone the hard drive for a permanent backup. The solutions I have used so far are fairly clunky, and any improvement on my current process would be a benefit.

The catchily named Orico 6239U3 hard drive dock looks funky for a piece of tech that does a basic task like hard drive access.

The 6239U3 is transparent, and when connected to power emits an LED light which flashes blue and red when data is being transferred. I like the fact you can see the motherboard, capacitors and chips. It pleases the geeky part of me.

The dock will read to two hard drives of up to 12TB in size and will transfer data of up to 5Gbps using USB 3.1 protocol.

Orico says that USB 3.1 is 20% faster than USB 3.0 and up to 10 times faster than USB 2.0. It also supports UASP (USB attached SCSI) protocol, but my old devices did not use this protocol.

It will also read 2.5 or 3.5 inch solid state drives too, and you can mix both drives in one enclosure to transfer data from one disk format to another. It shows each partition on the disk for easy access.

It automatically enters sleep mode after 10 minutes of inactivity.

When you clone a disk, four indicator lights on the enclosure show the progress of the data clone quarter by quarter lighting all four lights when the cloning has been completed.

A useful feature of this enclosure is that it does not need to be connected to a PC when it is cloning. I tested this with one of my Western Digital drives that was starting to fail in my RAID array and was impressed at how well it worked.

I mainly use enclosures for data transfer and quick backups for offsite use. My broadband speed is not fast enough for me to totally rely on the cloud for backups.

One thing you must know -- and the enclosure is not clearly marked -- is which is the source and target drives. The source drive is towards the rear of the enclosure and sits on top of the area of the board with the most electronics.

The target drive is towards the front. Make sure you check this, to avoid the source data being overwritten. Orico could add a label to the enclosure to remove any confusion here.

Apart from this issue, the enclosure effectively does what it promises and has streamlined my office operation. I'll be using this a lot more regularly to move data around, and I'll replace some of my USB drives with some SSDs instead.