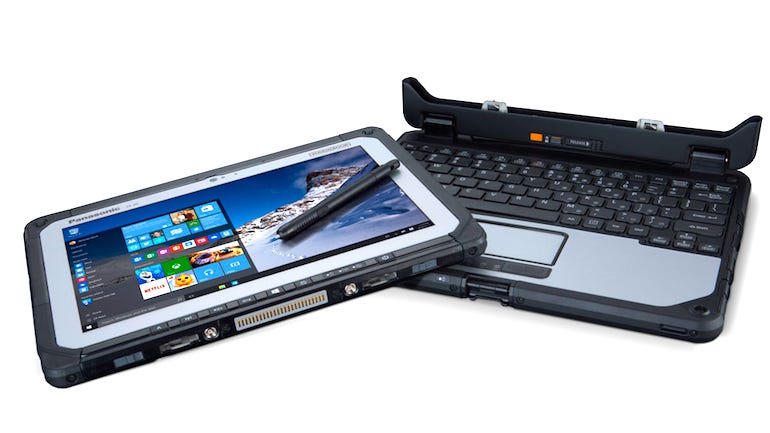 The PC market may be in decline overall, but one growth area is the 2-in-1 tablet/laptop hybrid, and it's this sector that rugged computing specialist Panasonic is targeting with its 10.1-inch Toughbook CF-20. There are plenty of mobile professionals -- both white and blue collar -- who require a robust yet portable computer, and the flexibility of a 2-in-1 hybrid makes sense for this market.

So, is Panasonic's CF-20 tough enough to prosper not only in challenging physical environments, but challenging market conditions too? And how does the starting price of £2,218 (ex. VAT, or £2,661.60 inc. VAT) affect the picture?

Tablet/laptop hybrids come in a variety of shapes and sizes, but you'd never mistake the chunky Toughbook CF-20 for a Surface Pro, or any of its increasing number of clones. It succeeds the similarly robust CF-19 -- another 10.1-inch computer, but a convertible (swivelling screen) rather than a hybrid (detachable tablet) device.

The CF-20 has the familiar Toughbook look-and-feel: the sturdy magnesium alloy chassis is clad in silver-effect plastic on the back of the tablet and the keyboard section's wrist-rest area, with tough black 'bumper car' edging to soften any blows, and house a generous array of ports, slots and connections -- all safely behind lockable covers, of course.

The screen is a 'sunlight-viewable' IPS unit delivering up to 800cd/m² brightness, with a resolution of 1,920 by 1,200 pixels (224ppi). It's a capacitive 10-point touchscreen, with a Dual Touch option available that includes an IP55-rated digitzer. Panasonic's PC Settings Utility allows you to select between using both the touchscreen and the digitizer, just the touchscreen or just the digitzer. You can also select between regular touchscreen operation and modes suitable for gloved and wet fingers:

Digitizers can adversely affect image quality, but we found the CF-20's IPS high-brightness screen to be extremely viewable from a wide range of angles both indoors and, more importantly, outdoors. The digitizer pen slots into the right-hand side of the tablet when not in use, on an extendable tether for ease of use in the field.

Beneath the screen there are seven buttons: two user-programmable buttons, volume up and down, a Windows button, autorotate on/off and power-on. There are also three LEDs, for battery, wireless and power status.

The keyboard section, which also includes a second battery, adds 37mm to the system's depth, thanks to a curved section that accommodates a sturdy pull-out carrying handle (which can also be used to hang the computer on a workspace wall). It adds 810g to the weight, making 1.76kg overall. By contrast, Dell's 10.1-inch Venue Pro weighs 1.26kg with an add-on keyboard.

The keyboard itself is a well-appointed, if somewhat cramped, unit comprising 83 relatively small island-style keys. The Enter key and the spacebar are particularly diminutive, and may take some getting used to. On the other hand, you get an inverted-T set of cursor keys, which double as Home/End/PgUp/PgDn via a Fn key combination, full-size number keys and half-size F1-F12 keys. The feel is good, and overall it's a good typing platform considering the size constraints.

The keyboard may be good, but we didn't like the small two-button touchpad. We're used to smoothly responsive touchpads, even with a light touch of the finger(s), but on our review unit you had to press unusually hard to avoid jerky cursor movement.

The tablet slots into a solidly hinged cradle on the keyboard base. There are two connection points, which are disengaged via a sliding 'release' switch in the middle of the cradle section. For extra security, this release mechanism can itself be locked by a switch that slides upwards. The hinge travels 180 degrees, allowing the screen to lie flat on a desk; you can also attach the screen in 'presentation' mode, facing away from the keyboard. With the optional second battery in the keyboard section, the CF-20 is well balanced, but since we didn't have this in our review unit, it was somewhat top-heavy, tending to tip backwards as you tap the touchscreen once it gets beyond around 45 degrees.

The CF-20 is a fully rugged device, meeting MIL-STD810G for drop, shock, vibration, explosive atmosphere, temperature, rain and sand. Dust ingress and waterproofing are rated at IP65 level -- that is, the CF-20 is 'dust tight' and can withstand 'water jets' projected by a 6.3mm nozzle from any direction. Panasonic has also factory-tested the tablet's ability to survive a 1.2-metre drop onto a concrete surface. The upshot: this system should be able to take all but the most unreasonable levels of abuse.

The Toughbook CF-20 is powered by a dual-core Intel Core m5-6Y57 processor running at 1.1GHz (up to 2.8GHz with Turbo Boost), supported by 8GB of RAM and 256GB of internal SSD storage. Neither RAM nor storage are upgradable. Our review unit ran Windows 10 Pro, but Windows 7 Professional is also available (for the moment).

Wireless connectivity is exemplary, with dual-band 802.11ac and Bluetooth 4.1 on-board as standard, with 4G LTE mobile broadband and dedicated GPS available as options. Wired Ethernet is also supported, via RJ-45 ports on both the tablet and keyboard, and on the optional Desktop Port Replicator.

Talking of ports, the CF-20 is exceptionally well equipped in this department. The tablet has RJ-45, HDMI, USB 3.0, 3.5mm audio-out and a MicroSD card slot on the left side, and power-in on the right -- all behind lockable covers. The stylus lives on the right side too, and there are Kensington lock slots on both sides. The top houses battery and power status LEDs, and an optional barcode reader (present on our review unit).

The keyboard section is positively bristling with connections, with power-in, SD card, HDMI, USB 2.0 and VGA on the left, and two USB 3.0, RJ-45 and a serial port (a rare sight these days) on the right -- again, all securely behind lockable covers. An alternative configuration offers a smartcard reader, a fingerprint reader and NFC support in place of the serial port, barcode reader and USB 2.0 port.

On the bottom of the keyboard unit you'll find the second battery compartment (empty in our review unit), a docking connector and an attachment for external antennas.

There are plenty of accessories available to equip the Toughbook CF-20 for particular use cases -- including the Notebook Vehicle Dock, a rugged unit with full port replication and optional dual antenna pass-through.

Performance isn't a top priority for a system like the Toughbook CF-20, but that said, its Core m5-6Y57 and 8GB of RAM deliver respectable scores in Primate Labs' Geekbench 3 CPU test:

Panasonic claims 7 hours' life for the tablet's 29.6Wh li-ion battery, which is borne out by our power-consumption-based testing: we estimated longevities ranging between 11.7h and 2.6h, with the system idling at 25% screen brightness and performing a heavy workload at 100% brightness respectively. The mid-point between these extremes -- corresponding roughly to mainstream workloads with middling screen brightness -- is just over 7 hours. If you have the optional second battery, you can therefore expect to get around 14 hours, as Panasonic claims. An optional bridge battery caters for battery hot-swapping.

The CF-20 is a fanless system, so noise wasn't an issue when using the device (not that this would be a problem in many of the environments for which it's designed). More to the point, we didn't notice any thermal issues either.

The Toughbook CF-20 is a worthy detachable successor to the convertible CF-19. It's as thoughtfully designed and solidly built as you'd expect given Panasonic's experience in the rugged sector. The screen and keyboard are both excellent, performance and battery life are well up to scratch, and there are plenty of options to cater for different use cases. Our only real complaint is with the touchpad, which we found a pain to use. Yes, the Toughbook CF-20 is expensive, and also relatively bulky and heavy -- but these are the trade-offs you make for no-holds-barred ruggedness.